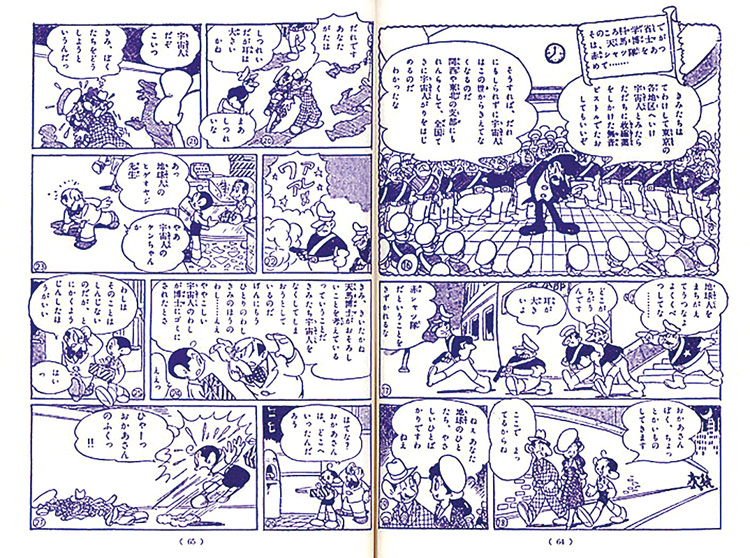 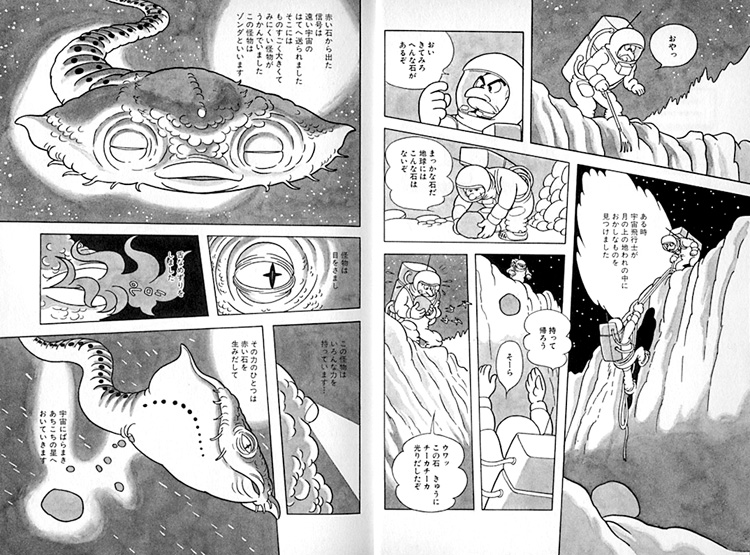 We were able to immerse themselves in the make-believe world of the Mighty Atom, as its author knew how to make it seem real.

We are used to seeing comic art as escapism – a genre in which improbable superheroes transport the reader into a fantasy world. This may be largely true in the West, but Japanese comic artists often create their stories with an eye to reality. This is no recent trend either: Tezuka Osamu himself, even in the 1950s and 60s, used his unique talent to portray realistically the times in which he lived. After all, for him manga was a form of social satire. Let’s see how Tezuka used comic art to comment on some of those years’ major events. In 1951, when Mighty Atom (Astro Boy) was born, Japan was still struggling to recover from the destruction caused by the war. Astro Boy soon became a friend to all those children (and adults) who had lost everything and were living among the ruins. The robot first appeared as a supporting character in Captain Atom, a story that was serialized in Shonen magazine. Then, in April 1952, he became the protagonist of his own Mighty Atom manga.

While the story is loved worldwide because of its universal message, Tezuka never forgot to add some direct links to real-life events. In 1951, for instance, the country was still occupied by the American army while another war was raging in Korea. General MacArthur, in the meantime, was conducting another kind of war against the increasingly powerful labour movements. His Red Purge was meant to expel communists and their followers from private organisations as well as public positions. In Captain Atom, Tezuka portrayed the so-called Aka Shatsu Tai (Red-Shirt Troops), the intelligence police within the Ministry of Science. Created by Dr Tenma, their job is to hunt down aliens ruthlessly. While apparently being a work of fantasy, adult readers must have been reminded of both the ongoing Red Purge as well as the Kenpeitai secret police who terrorised Japanese society before and during the Pacific War.

At the same time, though, Tezuka’s main readers were children, and he certainly aimed at bringing hope and a renewed sense of adventure into their lives. In those years, Tokyo was full of homeless people living in stations and shoeshine boys trying to make a living on the streets, but reading about futuristic cities full of skyscrapers and a huge circus theatre set in the middle of Ginza would at least help them dream and escape their harsh surroundings. One of the defining moments of the 1960s was Apollo 11’s moon landing on 20 July 1969. I was only five at the time and vaguely remember Neil Armstrong’s first step on the moon, but people around the world were glued to their TVs to watch that historic moment.

When, in 1970, the World Expo was held in Osaka, some of the rocks collected by Apollo 12 were exhibited at the US Pavilion, so you can imagine the long lines of visitors who wanted to see them. During the summer season, the heat was so intense and the waiting time so long, that many people felt unwell. So in order to solve the problem, it was decided to display a smaller rock at the Japan Pavilion.

Probably amused by all the brouhaha surrounding the Apollo missions, Tezuka got to work right away and published a short manga called Apollo wa naze yopparatta ka? (Why did Apollo get drunk?). The story appeared in the 1969 August issue of Manga Dokuhon magazine, i.e. just a few weeks after Apollo 11’s moon landing.

One result of mankind’s close encounter with the moon was that the astronauts’ merciless cameras revealed the satellite for what it was: not the beautiful, celestial body romantically described by poets and artists, but an ugly, barren piece of rock. In the same way, Tezuka tells the story of a beautiful woman who devilishly tempts five men (a father and his four sons) one after another, only to show that her heavy makeup actually hides a surprisingly ugly face. In a parallel story plot, an Apollo 12 astronaut contemplates his bad luck: people have rapidly become used to men flying to the Moon, and there’s nothing novel his mission can add to Apollo 11’s epochmaking landing. Adding insult to injury, Mission Control orders Apollo 12 to bring back a stone big enough to use to make pickles. Desperate, the astronaut gets drunk. “Did we only go all the way to the moon to look for a stone to weigh down pickles?” is his bitter comment on the whole silly race to the moon. Tezuka produced one more Moon-related story, which was published in November 1969. Titled Tsuki ni hoeru onnatachi (Women howling at the moon), this is the rather risqué story of how consecutive Apollo missions strip the moon bare after taking all its rocks, which they sell to eager collecto