Mount Fuji as you’ve never seen it before 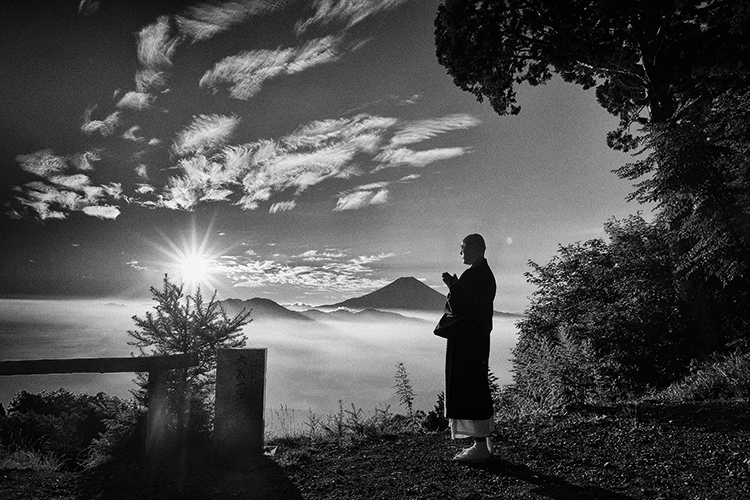 Awe-inspiring experiences typically start in mundane ways, and this was no exception. My friend Nicolas was penning a piece about the mysteries that lay in store for us, at the peak of Mount Shichimen. Our trip started with a bullet-train out of Tokyo, bound for Shimobe Onsen. Three hours later, Nicolas and I arrived in Minobu, Yamanashi Prefecture, a place where many things seem frozen in time. Cobwebs covered rusty old bicycles, which stood in front of half-open convenience stores on sleepy streets.

The ryokan, or Japanese inn, was an ancient place run by a very energetic elderly woman, who took us on a grand tour of the premises. Like many older Japanese ryokans, despite not being a gigantic building it had many rooms, hallways, nooks and crannies, and since it was constructed mainly of wood, wherever you walked the sounds of your footsteps were accompanied by a pleasant creaking sound. Venturing into the basement in search of the baths, we had a feeling of being watched by ghosts; there were lots of dark, narrow hallways leading to musty closets and storerooms. Finally we located the baths, which reeked of sulphur but were soothing to slip into after a long day on the train.

The next morning, we awoke in our large tatamimat room, had a traditional breakfast of green tea, fermented soybeans and fish, said goodbye to the sprightly inn-keeper, and started the long ascent to the top of the mountain. For five hours, we dragged our weary legs up…and up…and up, wondering why on earth someone would carve a path into this mountain. Trekking up a series of switchback trails, our legs practically gave out from underneath us.

Arriving at the top, however, we understood: entering a thicket of trees, we were greeted with the sight of a gorgeous emerald-green lake (a dragon is rumored to live under the surface of the water), and then, after yet another ascent of a long series of steep steps, with a stunning view of Mount Fuji. It was almost as if we were standing right next to the famous mountain. We also met our guide, Genga-San, a friendly young monk who lives on top of the mountain. Our accommodation for the night was a labyrinthian Buddhist monastery with innumerable long hallways and sliding doors, all of them seemingly identical. We were ushered into a large room, the walls and ceiling of which were covered with complex gold carvings, chandeliers, pillars and special drawers. I asked Genga-San, ‘Why gold?’ since it seemed at odds with the spartan image of the Buddhist spiritual system. He responded, ‘…because gold is eternal.’ Then followed ninety minutes of sutras – a seemingly endless, ocean-like wave of sound as fifteen monks ‘sang’ their sutras in guttural voices, occasionally banging a gong or beating a drum, led by a powerful-looking monk in a conical hat. Nicolas and I sat in stiff-backed chairs, watching and listening to the sutra-singing unfold, mesmerized. When they had finished, we were ready for bed. Genga-San asked us, ‘What time would you like to get up?’ I responded, ‘4:30 AM,’ not realising what consequence this would have. The next morning, at exactly 4:30 AM, we were suddenly awoken by the sound of drums. The sliding doors were swiftly opened and three monks entered, demanding our futon, and in its place quickly putting a pot of green tea and some cups. All of this happened within fifteen seconds, and by the time they left I felt as though I were still dreaming, but the steaming pot of tea confirmed that it had all, in fact, been real.

Climbing to the Fuji viewpoint in the dusky, purple light, we slowly became more and more aware of a droning sound, like thousands of mosquitoes. As we got closer, we saw five hundred teenage girls, all clad in white robes (similar to karate outfits), facing the sun as it slowly started to peek above the horizon, and passionately chanting a sutra while making fierce spinning gestures with their hands.

It was hypnotic and surreal, being in this spot, seemingly removed from the rest of the world, surrounded by hundreds of chanting girls, the clouds spreading away from us as far as the eye could see, like an endless ocean; and the sun slowly rising, almost like an aged actor slowly emerging upon a stage. Finally, the sun had risen, and rays spilled toward us in wide swaths, flooding everything with golden light. The teenage girls slowly dispersed, and we were left standing there, the three of us: Nicolas, Genga-San and I, and then just the two of us, Nicolas and I. We stood there, still a little weary from our hike of the day before, but warmed by the sun. I felt ready. Ready for all the troubles that would await me back in Tokyo, and ready, too, for the moments of joy, laughter and levity. Ready to embrace it all, and reminded by this experience that life is indeed a gift.

FROM SHINJUKU STATION IN TOKYO, take the Azusa train on the Chuo line as far as Kofu, then change to the Minobu line to Shomobe Onsen. From there, take a bus to Shichimenzan-tozanguchi, and then a taxi to Hagomoro.

No60 [ENCOUNTER] A new cultural expression

No61 [SHOWPIECE] In the footsteps of Cassavetes