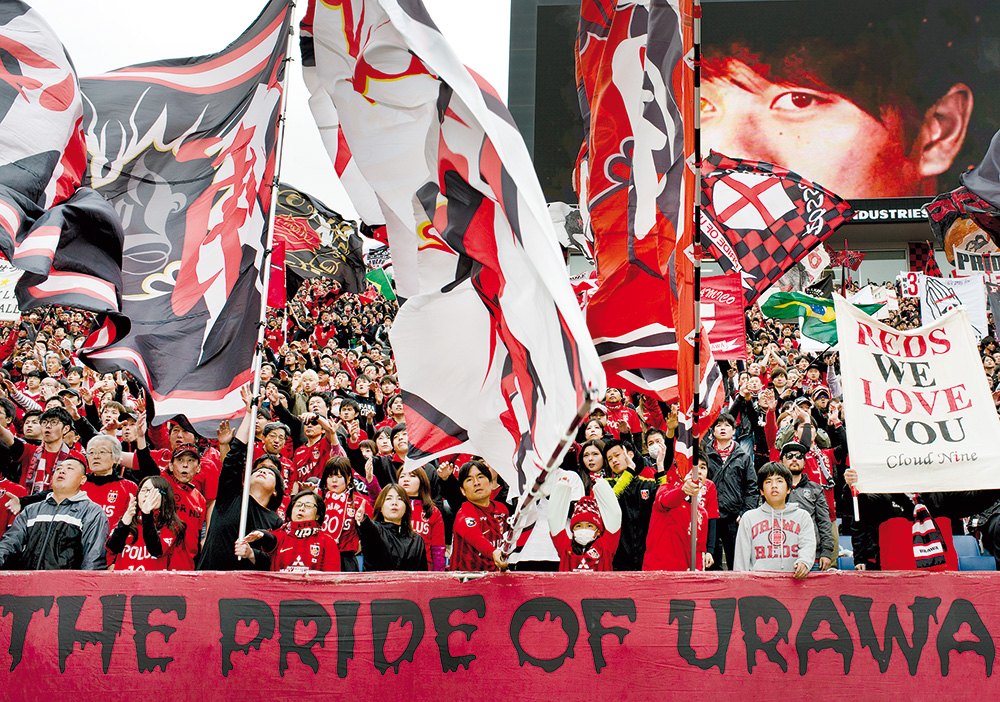 The fervour of the Urawa Reds’ supporters is legendary in the Archipelago. It recalls that of those other Reds, from Liverpool.

For more than a century, this city to the north of Tokyo has been passionate about football and attracts thousands of fans.

Sitting in the sun-soaked stands, the TOMIDa family is eagerly awaiting the start of the game. This Saturday, Urawa Reds are up against Vissel Kobe in the aFC Champions League, one of the season’s most important matches. Their eldest daughter, Yuzuki, aged 8, her cap firmly on her head, is finding it difficult to contain her excitement and can’t sit still on her seat, but is “so happy to see, for real, the players I watch on television all the time”. Her father, Kensuke, who readily describes himself as an ordinary working man, is delighted to see his daughter so happy. “I’ve been a fan of the Urawa Reds for twenty years,” he announces proudly. “It’s the third time we’ve come to Saitama stadium, but last time, SUzUKI was still a baby, she remembers nothing about it,” he smiles. “It’s the first time for Satsuki, our youngest.” aged 4, the little girl doesn’t seem to be bothered in the least by the roar of the noise and the music in the stands around them. without batting an eyelid, she puts a large mentaiko onigiri (cod-roe rice ball) in her mouth. Their mother, akane, watches the happy group, each wearing the team’s iconic red jersey. The TOMIDas live in the city of Konos and were happy to make the one-hour car journey to watch the sold-out match. “It’s an opportunity to enjoy a family day out,” she enthuses. Their father adds: “It’s been far too long since we were last here, it’s a real pleasure to be able to enjoy this unique atmosphere. I’ve great memories of this place, I’ve always had a great time here.” This afternoon, 55,000 people are expected in the Saitama 2002 stadium, which is its maximum capacity. It is the biggest stadium in Japan and one of the largest in Asia. “Usually, there are around 35,000 people in the stands,” specifies MATSUMOTO akihiro, the club’s press relations manager. “But today is special. Nobody wants to miss the match against Kobe.” The long queues of people at the entrance waiting to buy last minute tickets are a visible testimony to the widespread enthusiasm generated by the event. “The match isn’t due to start until 13:00, but the first fans arrived at 09:00 this morning. It’s always like that. at Urawa, they’re very keen!” Before the kick-off, the supporters traditionally treat themselves to all kinds of food and drink, as well as enjoy the entertainment and games organised in front of the security gates before they’re allowed into the stands. The entertainment space has been named “Reds wonder- land”. “People come to watch the match, but also to spend a day out in the stadium with their family or friends to enjoy the atmosphere and have fun together,” he adds. 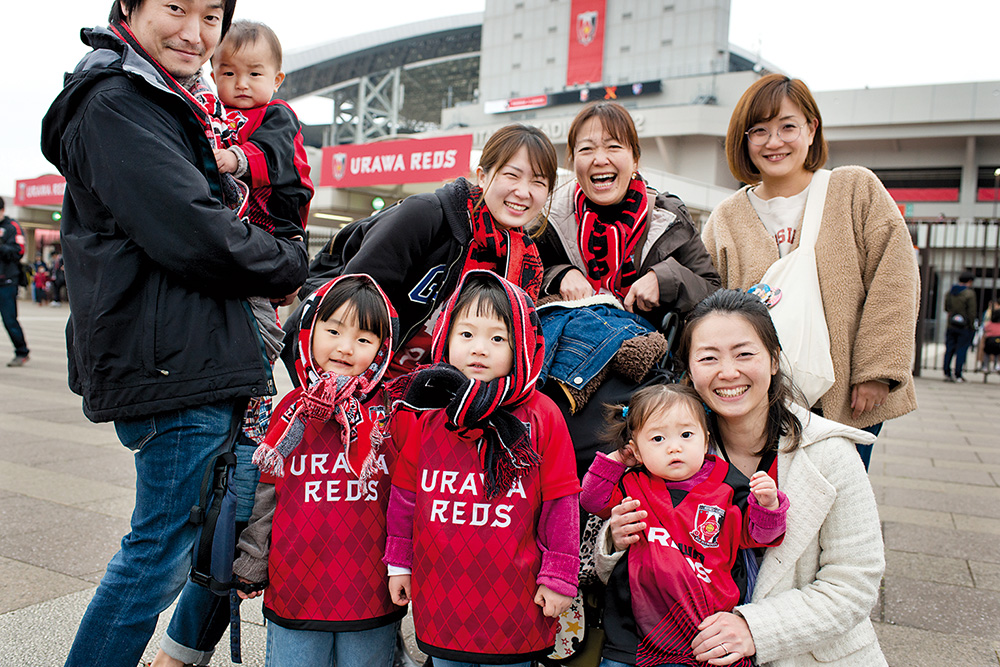 Just like the TOMIDAs, many families come to watch their favourite team play.

Made in Japan fast food reigns supreme in the stands: the smell of ramen (noodle soup), yakitori (chicken kebabs), okonomiyaki (savoury pancakes) and other kinds of fried chicken fills the air. Beer flows freely for the adults, hot chocolate for the children, and large expanses of green allow the children to run about and expend their energy before the start of the game. a large majority of the fans are wearing clothes in the club’s colours. “That’s the same at practically all our matches every week, and there’s always a great family atmosphere,” asserts MATSUMOTO akihiro. “The different generations sit side by side. In the stands, the ultra, pure and hard-core fans keep to one side. My advice is to avoid talking to them as they’re very focused on the action and hate to be interrupted when they’re watching their team play. But there are also lots of families, children and elderly people, mostly from the prefecture, who enjoy the good-natured atmosphere. The stands are red and everyone is wearing Urawa Reds jerseys, which helps to contribute to this feeling of solidarity. There’s nowhere else in Japan that’s so passionate about the game of football.” 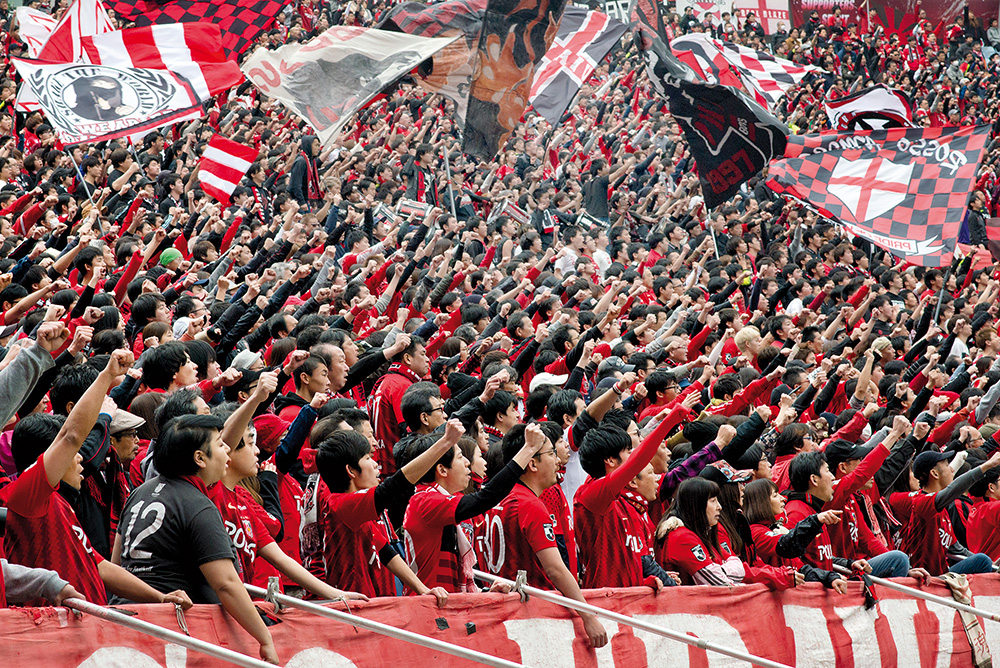 “Everyone wears Urawa Reds jerseys, which helps to contribute to this feeling of solidarity,” maintains MATSUMOTO Akihiro, the club’s press relations manager.

But where does this all-devouring passion for football come from? why precisely in this Japanese prefecture located less than an hour’s train journey from the capital is there such a cult following for this game? To understand that, we need to go back in time, “110 years, back to the origins of football in Urawa,” says YaMaMOTO Yohei, head of the club’s communication department. “at that time a teacher, HOSOKI Shiro, who was passionate about football, started to train students at old Saitama Normal school teacher training college.” This was in 1908, and it was the first university football team in Japan. He very soon passed on his passion for the game. His enthusiasm never faded and won over generations of pupils in the city of Urawa. “Football is still played by a large number of children, girls as well as boys, as the sport is taught in many of the prefecture’s schools.” Thanks to the new stadium, opened in 2002 for the world Cup co organised by Japan and South Korea, children are also brought to various games at a very young age to watch their heroes play. “Old school features on the team’s emblem. It’s the building depicted just above the shield,” adds YaMaMOTO Yohei. The building still exists and is nowadays home to the University of Saitama’s Department of Education. 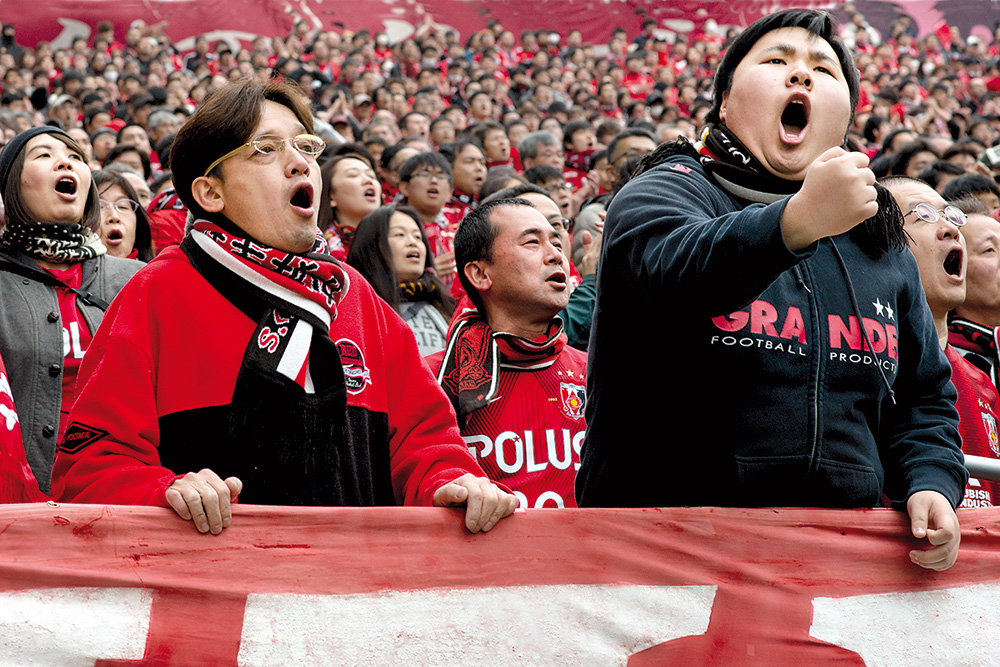 Most of the Urawa Reds supporters come from Saitama Prefecture.

Internationally known today, the Urawa Reds’ club was founded somewhat later, in 1950. Like many other football clubs in the Japanese professional league, to begin with, it was a corporate team, formed for the benefit of a company. The Urawa Reds were initially called Shin-Mitsubishi Industries’ Football Team, and based in Kobe, in the Kansai region. when the industrial group moved to Tokyo in 1958, it took the football club with it. and when Japan decided to found its first national non-professional league in 1965, Mitsubishi, which had already had a well-trained team for several years, became one of the eight founding members. In 1968, four of the Mitsubishi team won the bronze medal at the Mexico Olympic Games. This success increased the popularity of football in the archipelago. In the same year, on 17 November, a match in the final between Mitsubishi and Yanmar brought together some 40,000 people in the stands of Tokyo’s national stadium, demonstrating the unqualified enthusiasm for football in the archipelago. Mitsubishi finally won its spurs with this match, and from that year until 1982, it won its greatest titles, that’s to say four league championship titles and four Emperor’s Cups. In the 1980s, the club colours changed from blue to red, which is now closely associated with the club. “The choice of red also signifies the passion and love people have for the club,” states MATSUMOTO akihiro. In 1992, with the creation of the first professional championship, the name of Mitsubishi Urawa Football Club changed to Urawa Reds Diamonds, and MORI Takaji, one of the four medal winners in Mexico, became their general manager. The Urawa Reds signed the former French international, Basile Boli, for the 1996 and 1997 seasons, when he ended his career. The other undeniable strength of the Urawa Reds is the devotion of their supporters, who are reputed to be the most enthusiastic in Asia. Before the kick-off, the stand, full to bursting, is the colour of blood. The supporters grab each other by the shoulder and chant together exuberantly. at 13:00 sharp, the game starts and carries on for 90 minutes of play. a goal by the Urawara club is greeted by widespread jubilation. at the end of the match, broadcast live on tele- vision and which has attracted the presence of 300 journalists, players and trainers are inter- viewed and invited to comment on the actions on the pitch. The supporters can enjoy several more hours of food and drink in the stands before leaving for home, their eyes full of football images. “The majority of the spectators come from Saitama, but some come from other regions in the archipelago,” explains MATSUMOTO akihiro. “we have people who come from other countries in Asia and even Europe. Recently, some German supporters came to watch our matches.”

In the hours after the match, the celebrations continue in the streets of Urawa where the images and highlights of the day’s match are screened in the pubs. at the west Exit of Urawa station, about a thirty minute bus ride from the stadium, the supporters get together a final time in their HQ, “Riki”, an izakaya serving kebabs and a cocktail called Red Sour made with prune juice and leaves of shiso (a type of mint). “we strongly advise visitors from abroad to come and meet the Urawa Reds supporters, they’ll receive a very warm welcome,” the club’s press relations manager says. The Saitama 2002 stadium’s international dimension could be much expanded, especially next year when the Olympic and Paralympic Games take place in Tokyo. In fact, Saitama Prefecture will host four events: football, basketball, golf and shooting. In order to continue building on its friendly reputation, it will initiate a programme to organise accommodation with local inhabitants for athletes’ families, officials and organisers of the event.

FROM SHINJUKU or Tokyo station, take the JR Yamanote line to Komagome station. From there, take the Namboku line as far as Urawa- Misono. The journey takes 45 minutes.

SEATS CAN BE BOOKED in the following convenience stores:
Lawson, Family Mart or 7Eleven, or on the professional league’s