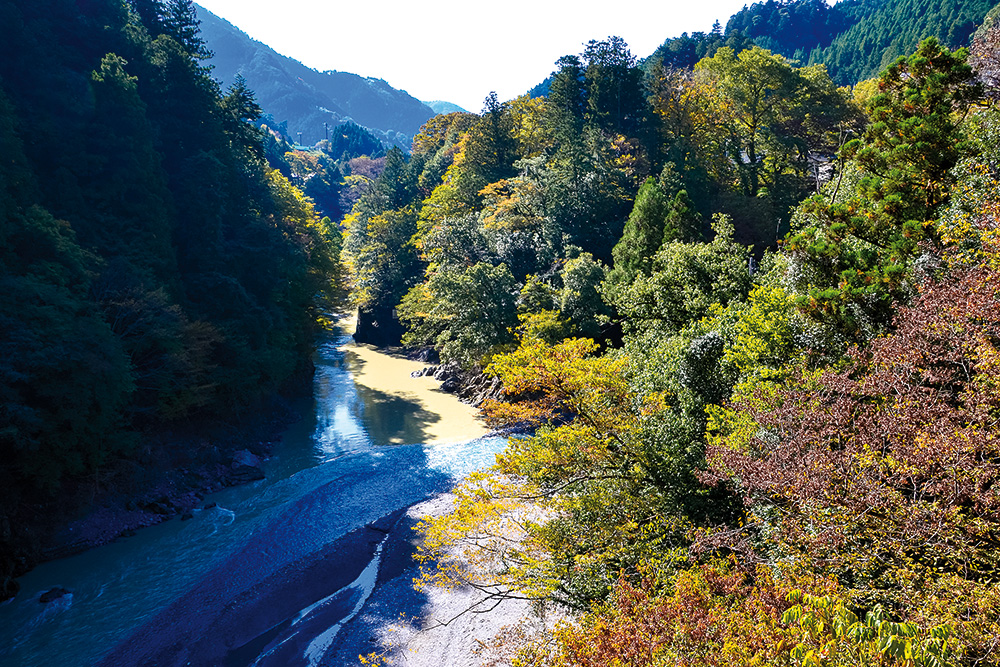 The junction of the Tama and Nippara rivers.

At the riverside, a dozen or so campers are eating the remains of a late barbecue among swirling woodsmoke. A twohour train journey from Tokyo, the Hikawa Campsite in the municipality of Okutama is a real godsend for many city dwellers who need a weekend break from daily routine. In front of his tent, NUMAGAHaruka is sitting in a folding chair sipping a beer while contentedly watching the crackling fire. All around us, the forest plunges down towards the blue waters of the Tama River. “It’s the first time I’ve been camping, and I’m doing ok!” declares Haruka, cutting up marinated pickled vegetables on a chopping board balanced on his knees. Having arrived late, we are just settling in, while most of the campers are already packing up at the end of the weekend. Only a few aficionados remain, and are starting to prepare their evening meal. “Real pros!” exclaims Haruka observing their perfectly organised surroundings where nothing appears to be out of place. More used to the comforts of ryokan, traditional Japanese inns, this 40-year-old Tokyoite night-clubber had to repack his enormous rucksack three times in order to get all his gear in. He then had to carry this heavy load as far as Okutama station, and stop on the way to shop for the evening meal. Luckily, the Hikawa Campsite hires out all the cooking equipment required as well as providing a cafe-restaurant for those who can’t bring themselves to light a fire!

The site opened around forty years ago, and also has spacious wooden bungalows to rent, which are booked well in advance by students. But camping is the cheapest option as it costs just 1,000 yen (£8) per person per day, as long as there is room left to pitch your tent. “In October 2019 Typhoon Hagibis caused a good deal of damage and camping was curtailed due to flooding. For the moment, the water has receded, but camping is still not allowed on the riverbank,” explains the manager indicating the yellow hazard warning tape that marks out the camping area. Next to the reception desk, situated in an attractive wooden chalet, is everything you need to spend the night here: bundles of firewood, sacks of coal, fire-tongs, saucepans, barbecue grills, cutlery… “Obviously, to hire all of this is not so cheap, but it’s still less than a night in a ryokan. And it’s much more fun!” observes Haruka pragmatically while making his way towards the river with his arms full of wood and saucepans. Our evening meal comprises grilled chicken breast, sliced beef with peppers and aubergines, and wasabi, Okutama’s great speciality, not forgetting the locally grown potatoes that we bury in the embers. At 17:00, the sun has already slipped down behind the mountains and a cool breeze blows over the canyon. It’s time to have a hot bath before supper! Situated a 15-minute walk away on the riverbank opposite, the Moegi no Yu hot springs can be reached by means of a dimly lit suspension bridge. Quite an invigorating little night stroll! Especially after coming out of the rotenburo (outdoor hot spring bath) in the middle of the forest, and going back to tuck into hot baked potatoes in your warm dressing gown, accompanied by good sake served at just the right temperature. In front of their fire, the campers grill enormous steaks or freshly caught fish from the Tama River. In the darkness, the glow of the campfires is warm and reassuring, while a flood of appetising odours rises towards the tree canopy. The meals round the campfire last long into the night; the atmosphere is peaceful. Despite the proximity of the tents, only the rushing waters of the river can be heard. But the forest shelters other creatures besides the campers. We are aroused by a rustling next to a tent, and discover with amazement a hairy animal similar to a racoon with a large belly and rounded head. A tanuki! It runs off with our shopping bag in its mouth. We chase after the animal, which finally stops at the edge of the water to examine its loot. In the moonlight, we hold hands and scuffle forwards to retrieve the plastic bag, all pulling in different directions. Suddenly, I realise that in front of me is a legendary Japanese forest animal whose mischievous behaviour my mother used to tell me about when I was little. An indigenous animal, the tanuki or racoon dog is known in Japanese folklore for its ability to take on the form of any object, even human! It’s full of tricks, but is also a symbol of good fortune, and its effigy adorns shopfronts displaying its huge testicles whose supple skin was once used to refine gold. This anatomical singularity has been an endless source of inspiration for stories in Japanese folklore. Yet it’s rare for a tanuki to approach humans so closely, and we are delighted with the encounter. “Tan Tan Tanuki no Kintama wa!”Haruka begins to sing at the top of his voice at the fireside, which translated means “the tanuki’s family jewels swing even when there’s no wind!” The nursery rhyme attracts our furry friend who, after stealing two buns, returns to boldly nose around in the rubbish bag nearby! At the end of a cold night, we wake to the cawing of crows searching for food. From behind the mountains dawns a chilly day, and the campers huddle round the fire. Then, at last, the sun floods the riverside beach, immediately warming up our numb bodies. We can smell miso soup, coffee and omelettes. A young woman walks by and greets us, then asks us if we had come across a tanuki the previous night! The animal had entered her tent, but she had not been able to identify it in the dark. The cheerful conversation livened up our breakfast. Other campers saw it pilfering bread, but when questioned the manager stated he had never heard of a tanuki in his campsite! We were very happy with our camping experience and left to walk along the hiking trails for which Okutama is famous.

From the Okuhikawa Shrine, a few hundred metres from the campsite, we take a small path along the Hikawa valley connected by a suspension bridge from where the confluence of the Tama and Nippara rivers can be admired. It’s a stunning place, with large pebbled riverside beaches where people enjoy a bento (lunchbox) with local specialities such as trout or venison, which is very popular in the region. We prefer to eat soba noodles with some excellent fried shrimp tempura in a small cafeteria close to the station. Established two generations ago by a former bus company employee, the decor of the Hirakawa Service Station is very retro with an old television set, pencil drawings on the walls and large bay windows overlooking the forest. Having eaten our fill, we are ready to visit the Atago Shrine. It’s accessible from the camping site and is well worth a visit: situated at the top of a mountain path lined with strange stone sculptures of naked women, you have to climb a giant staircase of 181 steps, which cuts straight through a forest of cedars and azaleas.

Breathless, we arrive at the top and find a rather ugly bright-red pagoda, then a few levels higher, the shrine, a medieval wooden building built by a former daimyo (feudal lord) to shelter the fire deities in the hope they would protect his castle from fire. A sacred stone representing the fire deities is erected on a rock. It’s roped off, covered with moss and fungi and represents the spirit of the mountain, and some pilgrims have attached omikuji, their fortunes written on paper, to bring them luck. On the other slope, we find ourselves crouching under a canopy of vegetation sheltering a little altar with bibs hanging from wooden slats. “The fire god also protects pregnant women and still-born babies,” clarifies Haruka, a devotee of Shinto rituals. We sit resting on a rock for a moment to admire the view of the valley surrounded by mountains. Hawks swoop in the clear blue sky, then disappear towards the mountain summits.

Part of Chichibu Tama Kai, the largest national park in Tokyo Prefecture, Okutama is overlooked by the Hinode and Mitake Mountains, which peak at 1,266meters and are both accessible from this hiking trail. We decide to descend by the Tokei Trail, which zig-zags through hamlets where obi (traditional belts) and peasant outfits are drying on the sunny balconies of the old-fashioned Japanese houses. We walk past vegetable gardens and rice granaries then enter the forest once again, among tall columns of cedar trees forming a living vault. You can never tire of looking at their trunks stretching up to the sky while listening to the golden leaves softly falling. Called the Mukashi no Michi, or ancient roads, these delightful narrow paths, unsuitable for vehicles, fit beautifully into the mountain landscape.

Today, only 5,000 people live in this municipality of Tokyo, the largest in size and the least densely populated – so much so that the municipality has to sell houses and plots of land for next to nothing to help repopulate and revitalise the area. It’s a blessing in disguise, as 50 kilometers, downstream of the Tama River, thousands of hectares of forest were felled to build Tama New Town, the capital city’s largest residential project. This vast housing development built in the mid-1960s, during the post 1964 Olympic Games boom years, destroyed the local ecosystem and fauna, as recounted in the celebrated animated film Pompoko (Heisei tanuki gassen Ponpoko, 1994) directed by TAKAHATA Isao. On the way back, we recall with pleasure this philosophical tale produced by the legendary Studio Ghibli, whose heroes are none other than tanuki. In order to take revenge on the economic miracle that is destroying their habitat, the Japanese racoon dogs devise every possible strategy to halt the project’s construction, and have no hesitation in using their giant scrotums as parachutes in order to bomb the building site! Currently, Tama New Town has 200,000 inhabitants and suffers from over-crowding and from its overdependence on Tokyo, like many other suburban new towns built on the banks of the 138 kilometres- long Tama River. Okutama, meaning “deep Tama”, is aptly named. Saved from massive deforestation thanks to the decline in the timber market in the 1990s, its population of 13,000 dropped by half. But its low population density has probably allowed it to preserve this unique and completely magical natural environment on the doorstep of the megalopolis.

▶︎PRACTICAL INFORMATION
TO GET THERE, take the JR Chuo line from Tokyo or Shinjuku stations as far as Tachikawa. Then change onto the JR Ome line to Okutama.

In addition to the places mentioned in the article, you can visit the Yoshino Plum Orchard (15 minutes from Hinatawada station) as well as the Ome Railway Park (10 minutes from Ome station).