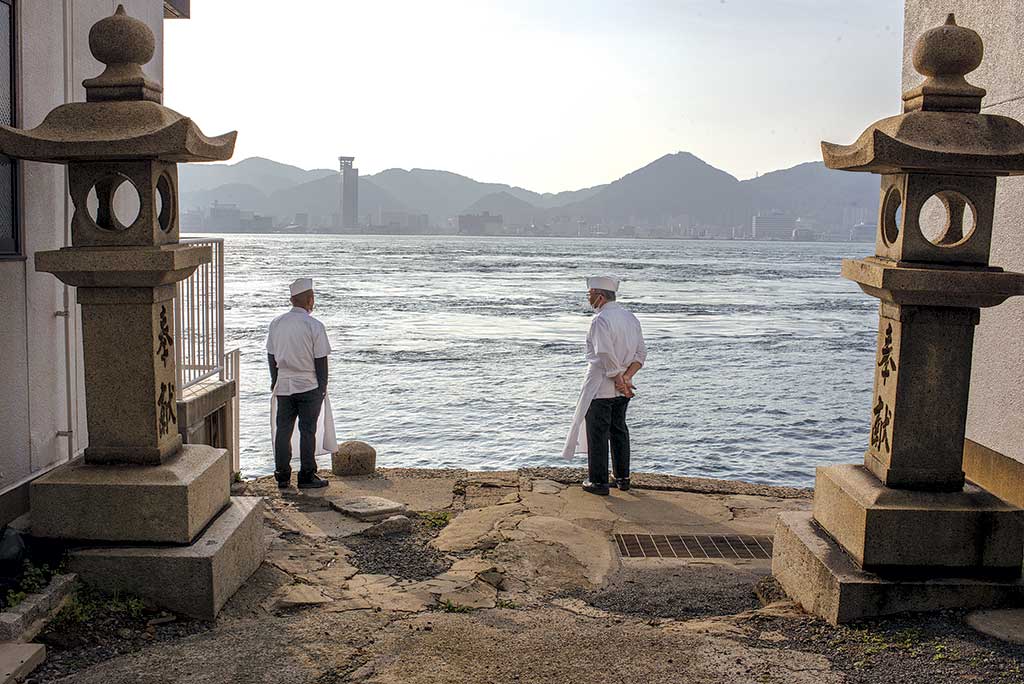 Located at the western tip of the island of Honshu, the port city has played an important historical role.

In 1146, when ambitious warlord and court noble Taira no Kiyomori had the lavish Itsukushima Shrine built on Miyajima Island, Hiroshima, he dedicated it to the island’s three sea goddesses in the hope of gaining their protection for his clan. For a time it seemed to work. By 1178, the Taira had become imperial rulers of Japan. Kiyomori even had his six-yearold grandson Antoku proclaimed emperor. But other clans became resentful of Kiyomori’s skulduggery in achieving his ends. The rival Minamoto – or Genji – clan rose up against the Taira – or Heike – clan, triggering Japan’s first civil war, known as the Genpei War. The Minamoto finally defeated the Taira in a colossal naval battle changing the course of history involving around 1,000 ships at Dan-no-Ura, off the coast of Shimonoseki, a city standing at the western limit of the Seto Inland Sea. The battle ushered in 700 years of samurai rule in Japan.

Today, people around the Shimonoseki area still say that the strange local crabs called heikegani, their shells bearing a pattern that looks like a grotesque human face, are actually the reincarnations of drowned Taira warriors. Akama Jingu Shrine, an impressive white building with red roofs overlooking the site of the battle, is dedicated to the spirit of childemperor Antoku, who drowned in the battle, and to all those who perished with him. There are seven mounds representing the Taira warriors who died in Dan-no-Ura. You’ll also see the statue of Hoichi the Earless, the blind lute-playing hero of a horrifying traditional ghost story popularised in the West by Lafcadio Hearn in his collection Kwaidan: Stories and Studies of Strange Things (1904). In the tale, Hoichi was renowned for his moving epic ballad recounting the saga of the Dan-no-Ura battle. It’s said that it took him a week to perform the entire piece, the tragic beauty of which could make even the goblins weep. While Dan-no-Ura was Shimonoseki’s largest battle, it was far from the last time that the city was the scene of incidents with both national and international consequences. Shimonoseki is the largest city in Yamaguchi Prefecture, with a population of over 250,000. It’s located at the western edge of Honshu, Japan’s largest island, and is only separated from the second-largest island Kyushu by the Kanmon Straits, a 650-metre-wide channel that has been a busy sea lane for centuries. As the gateway not only from Honshu to Kyushu, but also to China, Korea and other parts of Asia, Shimonoseki has long been a major transportation hub. You can still sail to Busan in Korea and Qingdao in China by ferry from Shimonoseki.

Given the strategic importance of the Kanmon Straits, Shimonoseki has been the scene of several battles and much political wrangling for control of the vital waterway. Some seven centuries after Dan-no-Ura, Shimonoseki was a stronghold of the powerful Choshu clan. It was just before the Meiji Restoration and change was in the air all across Japan after 200 years of isolation from the rest of the world. However, some samurai were incensed by the increasing involvement of Western nations in Japanese affairs, and the Choshu forces – stirred by the cry of “Expel the Barbarians” – decided to take matters into their own hands. They opened fire on Dutch, French and American ships in the Kanmon Straits, effectively blocking the Straits. This led to the Bombardment of Shimonoseki by British, French and Dutch ships in 1864, which put an end to the Choshu blockade. 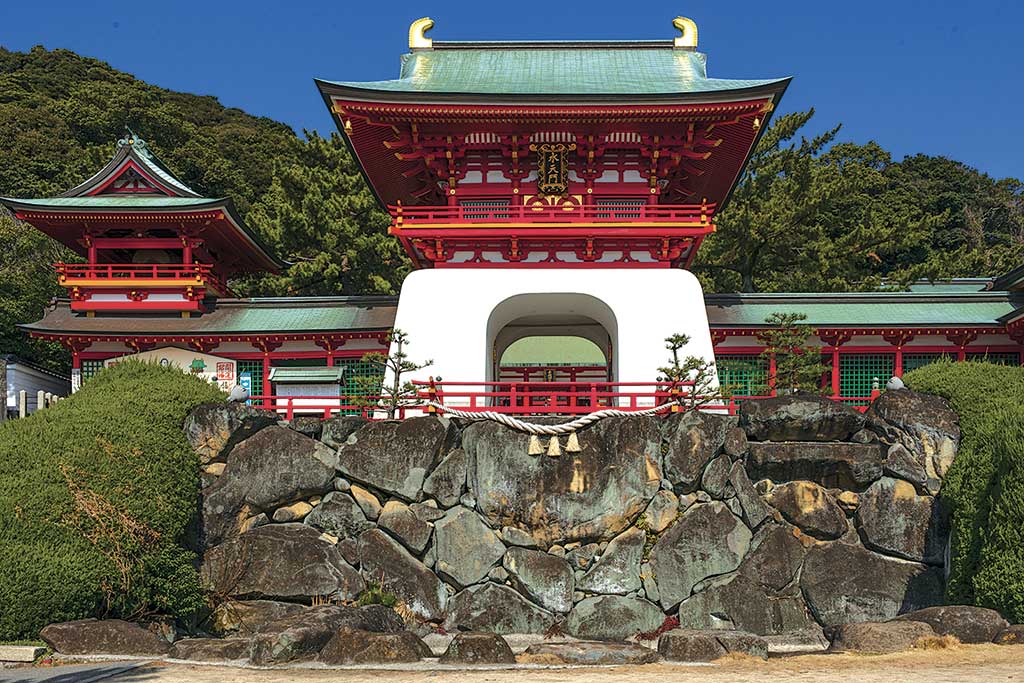 Akama Shrine is dedicated to the spirit of the child-emperor Antoku.

Along the seafront at Mimosusogawa Park, you’ll find replicas of the ship cannons used in these battles. For a small fee, you can even “fire” these cannons yourself. Actually, it’s just smoke and sound effects, but it’s impressive nonetheless.

In 1895, Shimonoseki again found itself centre stage of an historic event, namely the Treaty of Shimonoseki, which concluded the war between Japan and China with a clear victory for Japan. Under the treaty, China was obliged to cede Taiwan, the Pescadores Islands in the Taiwan Strait, and the Liaodong (South Manchurian) Peninsula to Japan. After the Meiji Restoration, in another sign of its international strategic importance, Shimonoseki was one of the first cities to be allowed to undertake limited trade with foreign nations. In July 1899, an imperial decree established Shimonoseki as an open port for limited trading with the United States and the United Kingdom. Evidence of the area’s privileged status at that time can still be seen in the opulent architecture of buildings such as the former British Consulate or the grandiose Mojiko station, just across the Kanmon Straits in Kyushu the only Japanese station (other than Tokyo station’s Marunouchi Building) to be designated an Important National Cultural Property. Mojiko station is built in the Renaissance style and modelled on Roma Termini station in Italy. Even further back in time, for a taste of Edo Era Japan (1603-1868), you can walk around Chofu Castle Town, girdled with samurai houses, earthen walls and Kozan-ji Temple, a Designated National Treasure. But if you visit Shimonoseki today, you’ll find much more than history to fire your imagination. Being surrounded by the sea on three sides makes Shimonoseki ideal for fishing. In particular, it’s known as Japan’s pufferfish – or fugu – capital. Pufferfish is considered an exquisite delicacy in Japan. It’s also famous for being highly poisonous if it’s not prepared correctly. In fact, eating fugu was outlawed in the 16th century. Later, Shimonoseki became the first town in Japan allowed to catch and eat fugu again, thanks to an order by Ito Hirobumi, Japan’s first prime minister. Ito happened to hail from Yamaguchi Prefecture, where Shimonoseki is located. 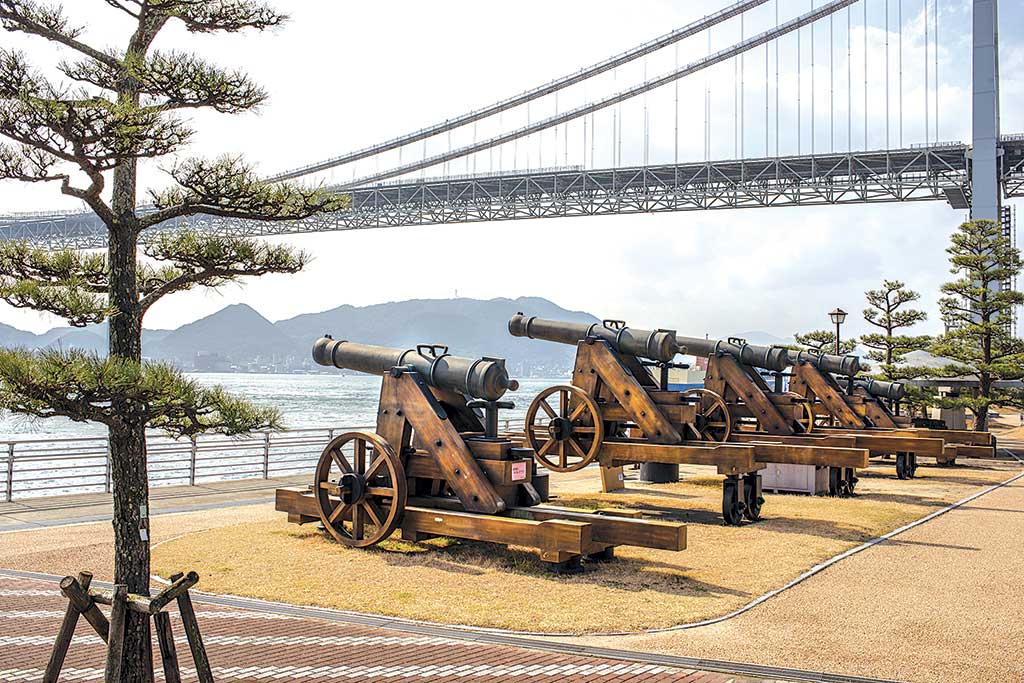 A line of cannons along the seafront in Mimosusogawa Park.

Fortunately, today’s expert chefs make sure that you can enjoy your fugu safely. Fugu restaurants abound around town, and many stalls in Karato market, very close to Akama Shrine, specialise in the fish. Karato distributes a whopping 80% of Japan’s pufferfish. To see pufferfish alive, visit the Kaikyokan aquarium, reckoned to be one of the best in Japan. There you’ll find over 100 species of fugu, along with penguins, dolphins and sea lions. Shimonoseki’s unique location means there are some superb views to enjoy if you know where to go. First, head for the 153-metre-high Kaikyo Yume Tower, built in 1996. At the top you’ll be greeted by splendid panoramas of the town, the straits, and – just across the water – Fukoka, the gateway to Kyushu. Alternatively, for even more stunning vistas, the peak of Mt Hinoyama also offers spectacular views. A 10-minute walk north from Mimosusogawa Park up a small hill leads to the ropeway station in Hinoyama Park where you can ride a cable car to the 268-metre peak. It’s at its most breath-taking come nightfall. The spectacular views help make Hinoyama Park one of the city’s best-loved spots for hanami (blossom viewing parties) at cherry blossom time (late March – early April). Other attractions include the elegant Kanmon Bridge which connects Shimonoseki to Fukuoka. If you don’t fancy driving, you can also walk there – along the seabed – via the 780-metrelong Kanmon Pedestrian Tunnel. Most stunning of all Shimonoseki’s futuristic marvels is the Tsunoshima Bridge, a 1,780-metre-long bridge that transports you across the sparkling turquoise waters of the sea to the small island of Tsunoshima. The island’s attractions include two beaches of white sand and a charming lighthouse dating from 1876.

The spot is particularly popular with couples. You can even climb the lighthouse, if the narrow spiral staircase doesn’t make you too dizzy. The reward at the top is another superb 360-degree view. After your exhilarating promenade through the vicissitudes of Japanese history in Shimonoseki, the tranquillity of Tsunoshima is an idyllic way to unwind and reconnect with the natural side of Japan.

Getting There
The easiest way is to catch the high-speed train from Osaka (Shin-Osaka station) or from Tokyo. It takes about 5 hours from Tokyo or about 2½ hours from Osaka to reach Shimonoseki (Shin-Shimonoseki).