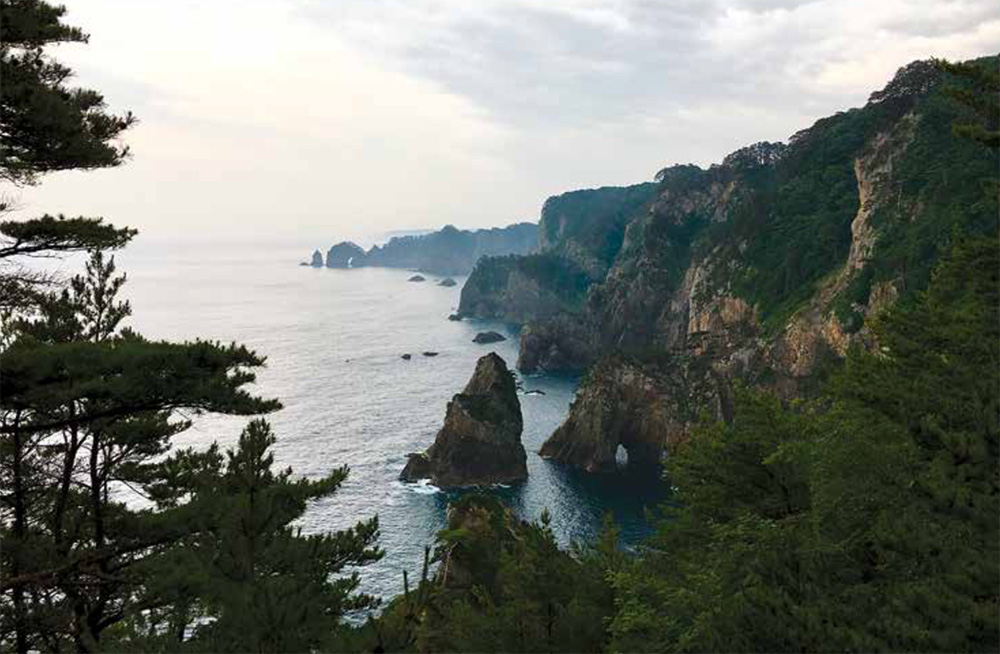 The Michinoku Trail provides breathtaking scenery like the Kitayamazaki Cliffs in Iwate Prefecture.

The Michinoku hiking trail in the north-east of the Archipelago is ready and waiting for tourists to return.

When Japan reopens to international travel, a fabulous treat awaits all who love hiking , forest-bathing and generally getting close to nature. It’s the Michinoku Coastal Hiking Trail. It runs for an astonishing 1,000 kilometers through four prefectures (Aomori, Iwate, Miyagi and Fukushima) in the Tohoku region of north-eastern Honshu, from Hachinohe in Aomori to Soma in Fukushima. The path takes you through rugged countryside, dense forests, secluded beaches and patchworks of rice fields. You will also come across many of the small fishing villages and coastal towns devastated by the 2011 Great East Japan Earthquake and Tsunami with its 13-metre-high waves.

Tohoku is a wild, remote land. It was one of National Geographic’s Best Trips 2020, and one of Lonely Planet’s Best In Travel 2020. Yet it remains virtually unknown to tourists – for now. Less than 2% of foreign visitors ventured here in 2019. Michinoku is the old name for Tohoku. It means “the end of the road”, an indication that it’s decidedly off the beaten track.

The Michinoku Trail, which opened in June
2019, was established by the Ministry of the Environment to attract people to the region, in the hope that tourism would boost the earth quake-ravaged local economies. In particular, it was hoped that large numbers of tourists would come here during the 2020 Olympics, especially as Miyagi and Fukushima (just a two-hour bullet-train ride from Tokyo), hosted some of the games.
If hiking 1,000 kilometers in one go sounds daunting (it’s reckoned to take anywhere between six weeks and three months to complete), fear not. The Michinoku Trail comprises many different sections, so you can hike just one section or part of one. Even just a half-day trip will bring you face to face with some staggering nature.

One particularly spectacular stretch is the South Fudai section in Iwate Prefecture, spanning the glorious scenery of the Sanriku Fukko National Park, one of Japan’s newest National Parks (completed in 2013). Here you follow the rugged Sanriku coastline with its 200-metre-high cliffs, dip down to deserted coves bathed by turquoise waters, climb up and down endless steps, take narrow paths through hushed forests (dotted with “Beware of the Bears” signs) and traverse dark tunnels hand-dug by locals 60 years ago. The highlight is the Ocean Alps – otherworldly rock formations rising out of the sea, eroded into natural arches, jagged pinnacles and craggy pine-tufted outcrops.

For first-timers, the official guide recommends the section between Natori and Iwanuma in Miyagi Prefecture. Unlike the demanding mountainous terrain of many other sections, on this stretch of trail you walk the vast plain formed by the Natori and Abukuma rivers. The trail also passes very close to Sendai Airport, making for easy access.

Whichever section you tackle, you’ll find your self moved not only by the natural beauty but also by the sight of towns destroyed by the earthquake-tsunami. For Robin Lewis, a young Anglo-Japanese eco-entrepreneur who walked 600 kilometers of the trail in 2017, meeting local people and hearing their stories was a life-changing experience.

“Walking forces you to slow down and take in the details, to stop and say hello and have a cup of tea,” he says. “What really makes places unique is the interactions with people. People make places.”
“The tsunami claimed almost 20,000 lives and wiped many communities completely off the map, devastating hundreds of kilometres of coast,” says Lewis. “Ten years on, the people of Tohoku are still rebuilding their lives. And, importantly, they are eager to welcome tourists from all over the world.”

Lewis says his many encounters with local people “filled me with a sense of hope and optimism for the future”. The Japanese are renowned for their spirit of omotenashi (hospitality). However, the countless acts of random kindness that Robin experienced along the Michinoku Trail were remarkable even by Japanese standards. Like the man who ran up to him in a small fishing village. “He screamed ‘Hello!’ in English, bought me a meal and walked off without saying another word.”

Then there was the woman who saw him walking along the trail and told him to stop. “She ran into her house and brought out a chair, along with an ice cream and three cans of juice. We sat in the shade and talked until it was all gone.” On another occasion, Robin had an early morning chat with an elderly woman. “We parted ways, and I continued walking. A few hours later, I heard a car screech to a halt next to me. There she was, with a bag of freshly picked berries and sweets to give to me as an omiyage (souvenir).”
Another day, two elderly sisters put him up for the night rather than let him sleep outdoors in his tent. “When I asked why they decided to help me, one of them told me how they had lost their family and their house in the tsunami. ‘It was a time of extreme hardship and sadness,’ she explained. ‘In the weeks, months and years that followed, so many people from all over the world came to help us, complete strangers work- ing alongside us to rebuild our town. My family has been on the receiving end of so much kindness and generosity, so I think it’s important to pay it back.”

An equally touching tale is that of 80-year-old Owada-san from Rikuzen-Takada who told Robin he had twice lost his home to a tsunami. “I’ve been a fisherman since the age of 16,” said Owada. “In 1960, my house was washed away by a big tsunami. Back then, we didn’t have any early warning systems…it just came, and took everything away. So my wife and I built a new house from scratch and slowly put our lives back together. Then, 50 years later, my house was washed away again by the 2011 tsunami. Twice in a lifetime… When I stop to think about it, it’s really quite hard to believe. But we are people of the ocean. My whole life, I’ve had a profound connection with the sea. It has provided for my family for generations and I have a deep respect for it. So am I angry? No. We just have to get on with it. We will rebuild again and carry on.”

Sadly, the high hopes that Olympics-related tourism would help this rebuilding process came to nothing. In October 2019 – just weeks after the trail had officially opened – monster Typhoon Hagibis caused widespread damage to parts of the trail. Scarcely had the repairs been completed than Coronavirus struck, destroying the dream of a large influx of tourists. “By the time of the Olympics, the number of hikers had already decreased,” says Aizawa Kumi of Michinoku Trail Club, which manages the trial. “It’s a great pity. Everyone along the trail feels the same.” However, she is optimistic that after all these hardships, better times are on the way. “If the coronavirus situation improves, I think that everyone in the Tohoku coastal area will be ready to accept hikers, and are hoping that many people will come here to walk.”

For now, the people of Tohoku must keep on waiting and hoping. But it can only be a matter of time before the world finds out that the Michinoku Coastal Trail is not just one of the world’s most breath-taking hikes, it’s also an inspirational lesson for humanity.

Like Lewis said in his Ted Talk at Tohoku University: “It’s a story of human resilience and vulnerability, but also of the complex relation between human societies and the natural world – fundamental to life on Earth.”