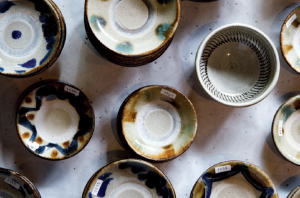 After re-appearing at the beginning of the last century, folk handicrafts are making a comeback, but with a different emphasis.

In its November 2012 issue published at the beginning of October, Ryoko Yomiuri, one of Japan’s most popular travel magazines, dedicated a whole special edition to mingei (folk handicrafts). In this feature, entitled “Feeling with your eyes, an introduction to mingei” (Mite, kanjiru hajimete no mingei), the readers of this monthly magazine learned about Japan’s handicraft heritage, which has lately been at the heart of a trend, developing over the past decade among Japanese, showing a renewed interest in craftwork. Many have tried to explain this trend for hand made objects, created by craftsmen all over the country. A search for identity at a time when globalisation is homogenising tastes, a need to rebuild reference points in a country shaken up by an unprecedented economic and social crisis, a return to simplicity after a flirtation with the world’s most advanced technologies, or just a passing trend allowing a lucky few to make some good deals. All of these could explain the return of mingei. As Ryoko Yomiuri magazine reminds us in its introduction, “mingei is a word we often hear, without knowing what it means “exactly”.” By guiding its readers to the main places mingei is produced, the magazine explains the origin of the word and the depth of meaning that lies behind folk handicrafts. We owe this theory of mingei to Yanagi Soetsu. “It has to be modest, but not cheaply made, a bargain but not fragile. Dishonesty, perversity, luxury are a few things mingei needs to avoid most: what is natural, sincere, sure, simple, is mingei,” he explains. This intellectual is interested in the work of craftsmen because he believes they are the most worthy representatives of art.

In his view, masterpieces are not made by artists, whom he considers arrogant and individualistic, they are made from the work of craftsmen whose main characteristics are humility and a sense of sharing. At the beginning of the nineteen twenties, with support from craftsmen friends, Yanagi Soetsu founded a review, which he halled Kogei, and started building a museum of folk art in Tokyo in order to spread his ideas. At the time Japan was in the midst of modernising, after having gone through a severe crisis, and the population seemed to be receptive to his words due to the fact that the traditional agriculture was still strong and Japan had always been proud of its craftsmen. During the feudal period they were protected and respected, which allowed them to develop. By taking advantage of these positive factors, Yanagi was able to develop his theories. “In order to save us from this pain (capitalism), we need to turn towards a world organised by associations. We need to progress towards a society in which communal society is protected, and I will call this society “a cooperation group.” And to renew the beauty of craftwork, its organisation will need to evolve into a cooperative association. We will need to link people together again and establish contacts between man and nature,” he wrote in his book Kogei no michi (The path to craftwork) published in 1928. These words are close to revolutionary in their approach. The book was released in a period of political confusion. A year later, Kobayashi Takiji describes the social misery in Japan in “The Cannery Boat”. This novel became a reference point of proletarian literature and became very popular after the 2008 financial crisis that saw many people lose their jobs in Japan. That corresponded more or less with the return in popularity of mingei in the Japanese archipelago. Although many young Japanese who feel they are victims of capitalism relate to Kobayashi Takiji’s book, the same cannot be said of Yanagi Soetsu. Yanagi’s work is also on sale in bookshops, but it has not achieved the same staggering sales as The Cannery Boat. Yet, in mingei, you can feel that need to go back to the roots of Japanese culture. Through his intellectual approach, Yanagi himself returns to his roots, by taking an interest in art trends related to Buddhism, such as the tea ceremony. During the first decades of the 21st century, there was a growth of interest in all these elements, coupled with a rediscovery of agriculture. In the face of deindustrialisation in the archipelago following widespread centralisation and the increase in job instability, many young people are demonstrating the wish to work on the land. At the same time, the newly retired, who in most cases have spent a great part of their life in the cities, are turning to the countryside to become gentlemen farmers. There is a veritable desire for authenticity developing after the years of the financial bubble, during which superficiality was the norm. Tools that have been hand made by people with special knowledge and a love of the soil take on a whole new dimension. Their simplicity is part of their attraction, as well as their usefulness and form. The nuclear accident at Fukushima Dai-ichi was a a symbol of a society that has been overrun by technology, and also contributes to reinforcing the desire to return to a simpler way of life in which handmade products have a place. That is why the word mingei has lost some of the meaning Yanagi Soetsu attributed to it, and led to magazines like Ryoko Yomiuri attempting to re-explain its significance to a new generation. It is hard to say if they succeeded. Nevertheless, the word has increasingly become a synonym of craftwork, and everybody can define it in his own way. The spirit of Mingei is well and truly here, but like any spirit, it is subject to many interpretations.