NAKAMURA Fuminori takes an interest in the world around him. He doesn’t hesitate to share his views and put them to the test.

Recognised for his talent in Japan as well as in other countries, Nakamura Fuminori is an attentive observer of the society in which he intends to play an active role. He feels he has a responsibility not to keep to the sidelines while his country is facing its present challenges.

Your writing style reminds me a little of Mishima Yukio or Dazai Osamu. How do you explain this?
NNAKAMURA Fuminori : The reasons are very personal. Deep down, I’m not a cheerful person. During a period of time when I had to be absent from my high school, I discovered No longer Human by Dazai Osamu. Like other fans, I recognised myself in the main character. It was after reading it that I became an avid reader. Back then, I was already in the habit of daily writing about what troubled me. Even with no ambitions of becoming a writer, my words took the form of a poem or a fairy tale. Once I reached university, instead of looking for work like my classmates, I started writing a novel and discovered something about myself. I had only one life to live, so I might as well become a writer!

You had great success with the novel Kyodan X [Cult X, unpublished in English] published in 2014. It questions today’s society. Does this mean that your interest has evolved towards more societal issues instead of focusing on the “self”?
N. F .: In Kyodan X, with its social, political and historical themes, I describe how the social context or world trends influence the individual. Basically, my subject hasn’t changed, but I can say that I have expanded my field of exploration. This is why this novel is rather long. I’ve already addressed social issues in the past. In 2009, for example, I wrote a story about the system of the death penalty in Japan. 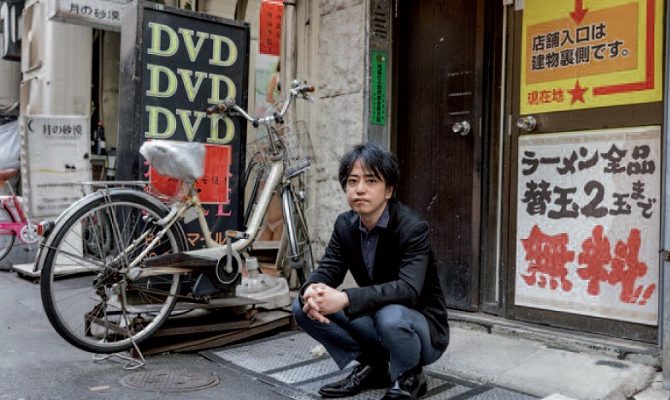 The author of The Thief makes a clear diagnosis of Japanese society.

How do you fit into society?
N. F .: My way of thinking has always been out of step with others, and I felt isolated. That was the case at school, where I pretended to get along with my classmates. At the same time, I suspect that, to a greater or lesser extent, everyone plays a role in his or her life in order to be part of this or that group. It would be more unhealthy if we were to adapt perfectly to society (laughs). Today, people express their disagreements anonymously on Twitter or on blogs. I don’t think that I’m anything special anymore. If you look closely, you can always find something special in someone, even if it’s overlooked at first. In the end, the difference between me and other people is only the career choice I made for myself. I decided to be an author.

How do you see Japan evolving politically?
N. F .: The progress of the right wing worries me with the way they exalt the past such as the Second World War. Because I am influenced by Sartre, as Oe Kenzaburo is himself influenced by this French writer-philosopher, I feel compelled to participate in the political debate, and I don’t hesitate to do so. Of course, I may be criticized, but for the moment I’m getting by. I’m certain that I learning much more than those who challenge me.

You’re not afraid of being labelled as…
N. F .: … being left wing? I belong to the moderate left. Yet today, in Japan, whether one is moderate or not, if you’re not with the right, you’re labelled sayoku, a leftie. Here the left and the right are so mixed up that one can’t can’t make out which idea is left or right. I wonder if there’s such a bizarre country anywhere else in the world. Whatever happens, as long as I am fully aware of my work and my role, I’ve decided not to duck out.

Among your generation, are there other writers who speak about political issues?
N. F .: Hirano Keiichiro. He’s two years older than me. We may be the only two to actively be doing it. In recent years, as the political situation has worsened, I see a few more writers appearing. But to my knowledge, they’re all older than us. When we meet, Hirano and I, we worry about the future of the country, and we say that we should do something, something other than writing. But we don’t yet know what …

The government’s priority today is to attract foreign tourists. What do you think should be the real priority?
N. F .: I think we have to come to terms with events relating to the Second World War, clarifying what happened and how Japan really behaved. Once this is done, everything will be much simpler.

What should Japan highlight that’s positive?
N. F .: Its cultural diversity. Japan has a wealth of high-quality cultural heritage that deserves to be exposed better. More investment is needed to develop human resources. It’s worth the effort because, for example, the quality of Japanese literature is recognized internationally today. Good books should get exposure in the rest of the world, instead of just focusing on certain products for political and commercial reasons. This is true in all areas.