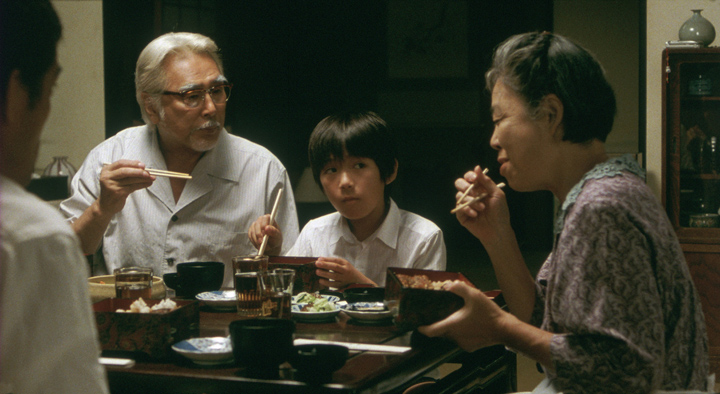 Without a doubt, Kore-eda Hirokazu is the best at portraying the Japanese family of today, as in Still Walking (2008).

Japanese filmmakers have been fascinated by family stories, and have used them to create masterpieces.

Japanese cinema is mainly known abroad for such genres as samurai films, J-Horror or monster movies. Their popularity has waxed and waned at different times, but one particular genre that has flourished continually (with the possible exception of the revolutionary 60s) is the family drama. As a sort of sub-genre of shomingeki (common-people drama), these stories have been tackled with some extraordinary results by some of the best Japanese directors. Occasionally they can be over-the-top farces, but most of them are slow-paced, restrained stories characterized by a minimalistic style, great attention to detail, and accomplished acting.

With so many beautiful examples to choose from, the task of squeezing more than a century of film history into a short article is in many respects impossible. Ozu Yasujiro’s works alone would be more than enough to cover the subject; or we could make Ozu go head to head with Kore-eda Hirokazu, arguably the genre’s best exponent in the last 15 years. Instead, we have opted to give you a more diverse overview, leaving aside some of the more obvious choices (e.g. Tokyo Story and other masterpieces from the 1950s) to show you how the genre has evolved alongside Japanese society. And for once we’ve left anime out of the picture…

Though some of Ozu’s best-known films are about extended families, he has also explored the struggle of single parents raising their only child in difficult economic situations. One such film is There Was a Father (Chichi ariki, 1942), which is quite unique in Ozu’s filmography for its overt political tone. It is the story of a widowed high school teacher (Ozu’s frequent leading man Ryu Chishu) who tries to raise his son as best as he can according to the ethical teachings and patriotic propaganda of the time. Japan was at war, after all, and the father-knows-best moral message implied that the State (as symbolised by the Emperor) was always right. The emphasis on stoicism and a sense of duty that trumps all personal considerations results in the father sacrificing the closeness and warmth of family ties, and makes this one of the most heart-wrenching examples of misguided fatherly love. The bittersweet final scene, with the son and his bride taking the train home with his father’s ashes in an urn, highlights the waste of a life spent apart from each other. 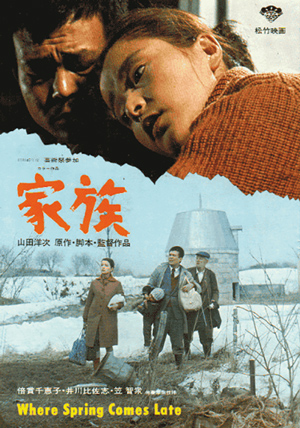 Kazoku by Yamada Yoji was a great success in 1970.

Ozu himself was forced to spend his teenage years apart from his father, but in contrast to the dutiful son in this film, he spent more time in the cinema than at school, and was eventually expelled from the boarding school. Jump forward 70 years, and Sabu’s Bunny Drop (Usagi drop, 2011) takes a more light-hearted look at single parenting with a completely different male approach to raising a child. Admittedly, the premise of a 27-year-old single salary man with no parenting experience whatsoever deciding to become the guardian of his grandfather’s 6-year-old illegitimate daughter, is rather hard to imagine (the film is based on a very successful manga/anime series), and director Sabu never delves too deeply into the hardships of single parenting. However, it’s interesting to notice how different the young man’s easygoing attitude towards the child is from Ozu’s stern father. He goes so far as to put aside his promising career for the sake of the little girl – that’s something that very rarely happens in the real world of highly competitive urban Japan. Speaking of competition, even without going all the way back to Ozu’s Japan, it’s interesting to see how family values changed between the late 60s and early 80s, when Japan finally emerged as an economic superpower. Though the family, as portrayed by Yamada Yoji in It’s Tough to be a Man (Otoko ha tsurai yo, 1969) and The Family (Kazoku, 1970), is a tightly knit multi-generational unit strong enough to withstand big and small traumas (including, in the 1970 film, the death of a child and the grandfather in the long cross-country trek toward a new future), just 13 years later Morita Yoshimitsu’s The Family Game (Kazoku Geemu, 1983) focuses on a dysfunctional middle- class nuclear family, which has replaced those traditional values with new social and economic aspirations only attainable through academic success. Each member has a fixed role, starting with the wage earner father who’s often absent due to constantly working overtime. The result is a total lack of communication, visually symbolised by the long rectangular table where the family eats every meal, all facing the camera. Gone is the feeling of togetherness and intimacy.

This social model began to falter during the 90s, after the economic bubble of the 80s finally burst. Kurosawa Kiyoshi’s Tokyo Sonata (2008) is the horrific chronicle of another middle-class family’s descent into hell. It all starts when the father (a successful company man in his mid- 40s) is suddenly fired because of downsizing (even today this is a typical nightmare scenario for many senior managers who are deemed to be expendable). Shamed by his dismissal, he tries to keep it secret while looking for another job, but the mounting stress results in having negative repercussions on the whole family – especially the unemployed older son, who decides to join the US army, and the younger son who wants to learn the piano against his father’s wishes. It is an utterly bleak story (another unemployed man – one of the father’s old classmates – even commits double suicide with his wife) that highlights how this situation, though by no means unique to Japan, has particularly bad consequences for the Japanese because they actually define themselves through their work and position on the social ladder. 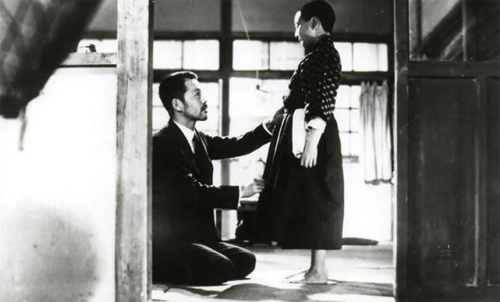 Japanese directors are well-known abroad for their off-the-wall approach to story-telling, and the family drama is no exception. Two such extreme film makers are Ishii Sogo and Miike Takashi who show us how easily the thin veneer of middle-class normality disappears when an intruder upsets the domestic routine. In Ishii’s The Crazy Family (Gyakufunsha kazoku, 1984) a typical family (mother, father and two teenage children) has just moved into their dream twostorey house when the husband’s father arrives, demanding to live with them. A real war ensues, with the five people trying to kill each other and literally demolishing the building in the process. Miike (Japan’s king of shock cinema) manages to go one step further in Visitor Q (2001) by having a teenage daughter have sex with her father for money, while the son (who is regularly bullied at school) unleashes his rage against his heroin-addicted mother – who works part time as a prostitute. It all carries on like this until a strange visitor appears from nowhere, and solves their psychological problems after seducing all the family members. Luckily, not all recent family dramas are like this. Kawase Naomi’s Shara soju (2003), for instance, is the subtle story of a troubled teenage boy trying to cope with the mysterious disappearance of his twin brother five years earlier.
Through lyricism and intelligence the film explores with the impact of loss, the persistence of love, and the strength we can gain through meaningful relationships with the people around us, be they family members or friends. The film ends cathartically with a sign of hope when Kawase herself (who plays the boy’s pregnant mother) literally has a baby on camera. We mentioned Kore-eda at the beginning. This director is often called Ozu’s heir apparent, but his characters’ anguish is usually much sharper than in Ozu’s melancholic stories. Take Still Walking (Aruitemo aruitemo, 2008), the film that definitively established the director’s reputation abroad. The story of a son and daughter who visit their older parents to commemorate the death of their brother, who accidentally drowned 15 years ago, is a seemingly very quiet affair, but hides an unresolved conflict between the parents and the surviving son who has feelings of filial inadequacy and regret despite, at the same time, wanting recognition from his parents, and resenting the fact that they cruelly make him feel the wrong son died. In the end, all these simmering tensions are never resolved, but the fact they remain unspoken does not mean they hurt any the less.