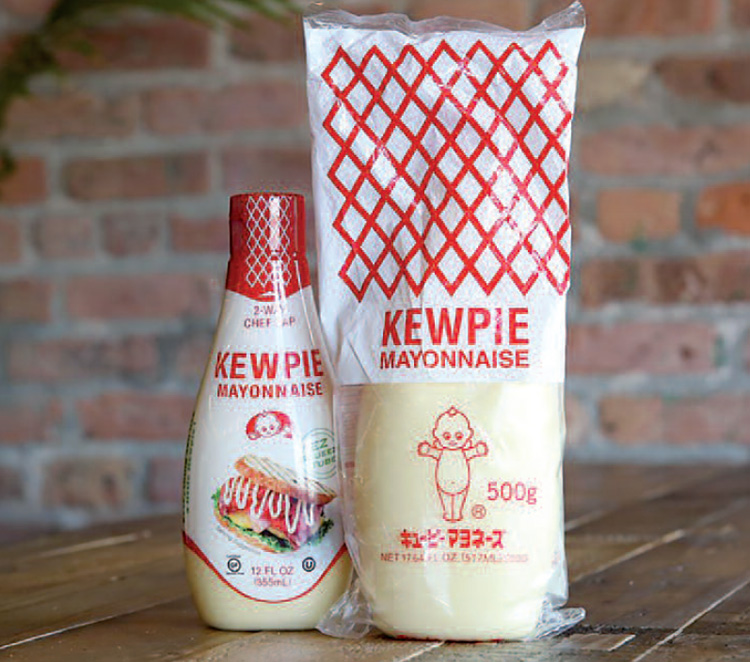 The first mayonnaise ever to be made in Japan dates back to 1925.

The Japanese are crazy about it. Some people eat it with everything, even cakes…

If you look inside the fridge of any of your Japanese friends, you’re almost certain to find a flexible transparent tube of mayonnaise nestling on a shelf in the door. Mayonnaise was first marketed in Japan in 1925, by the founder of the Kewpie brand, who discovered it while studying in the United States. Believing it to be the key to the American’s sturdy build and energy, as it enabled them to consume a large quantity of eggs and oil, on his return to Japan he started to market a version containing twice as many eggs as the original recipe. But eggs were a rare commodity at that time, so his mayonnaise was considered to be a luxury. Some, who knew nothing about it, even thought it was hair cream! Mayonnaise didn’t really become popular until after the Second World War, during the 1960s. Within fifty years, its consumption had increased dramatically. Today, the Japanese each consume an average of 1.5 kg of commercially made mayonnaise yearly; far less, though, than the Russians, who eat 5.1 kg per person. One in ten eggs laid in Japan is destined to be used in the production of mayonnaise.

During the past twenty years, there has even emerged a group of people who have coined the term mayola, a mayonnaise junkie who tips it onto everything they eat, even cakes and pastries! Without going as far as becoming “addicted” to mayo, it’s customary nowadays, unlike previously, to add it to some popular traditional dishes: omusubi (riceballs), okonomi-yaki (Japanese savoury pancakes with cabbage, noodles, meat or fish), takoyaki (octopus balls), yakisoba (stir-fried noodles) or even hiyashi chuka (chilled noodles).

Westerners are often flabbergasted! Some people try to explain the phenomenon by the fact that mayonnaise gives the Japanese a strong hit of umami, that irresistible flavour of amino acids, to which fat has been added, creating a taste and texture beloved by young Japanese people. And for those consumers who are worried about their health, every brand produces a range of “light” mayonnaise: some with less than half or even 80% less the normal amount of calories, less cholesterol, eggless varieties for those with egg allergies, even some using the highest quality organic free range eggs… it’s not easy to please everyone!

Japanese mayonnaise comes in different flavours: mentaiko (spicy cod), miso, soy sauce, sesame, umeboshi (pickled plums), yuzo-kosho (seasoning with yuzu peel, chilli peppers and salt)… The best tip is to use it as a seasoned fat: instead of oil for frying, for scrambled eggs or Cantonese fried rice, or even to replace eggs and oil in cakes or chocolate… there’s no limit to the creative imagination of the Japanese.

No31 [Traditional] June is “Minazuki”

No49 [CONFECTIONERY] The world of wagashi