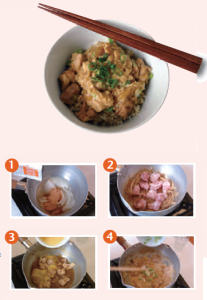 The family of popular Japanese dishes widely known as “donburi mono” consists of a bowl of white rice with various fillings piled on top. There are many different types of donburi available in Japan, such as unagi-don which is topped with cooked eel, maguro-don which features tuna sashimi and ten-don that contains tempura pieces. It was always customary for the upper classes of Japan to eat their rice and other dishes from separate bowls but this new way of dining became widespread in the Edo period (1603 to 1869) among busy engineers and remains popular as a quick and easy meal to this day. The recipe featured in this month’s ZOOM JAPAN is oyako donburi (also called oyako-don), one of the most popular of all the many varieties of donburi and a favourite of the Japanese working classes. “Oyako” literally means “parent and child” and the name refers to the two main ingredients needed for the recipe: chicken (the parent) and eggs (the child).

How to prepare:
1. Finely slice the onion and place it into a pan along with the donburi mix and 80ml of water. Put the pan on to boil.
2. Add in the chicken meat and continue to heat.
3. Once the chicken has been heated through, crack the egg and add it into the pan.
4. When the egg has cooked, add in the chopped spring onion and then pour on to a bed of steamed rice. Your oyakodon is now ready to serve!

No33 [Cooking] Chicken and Bamboo Shoots with Soy Sauce and Ginger