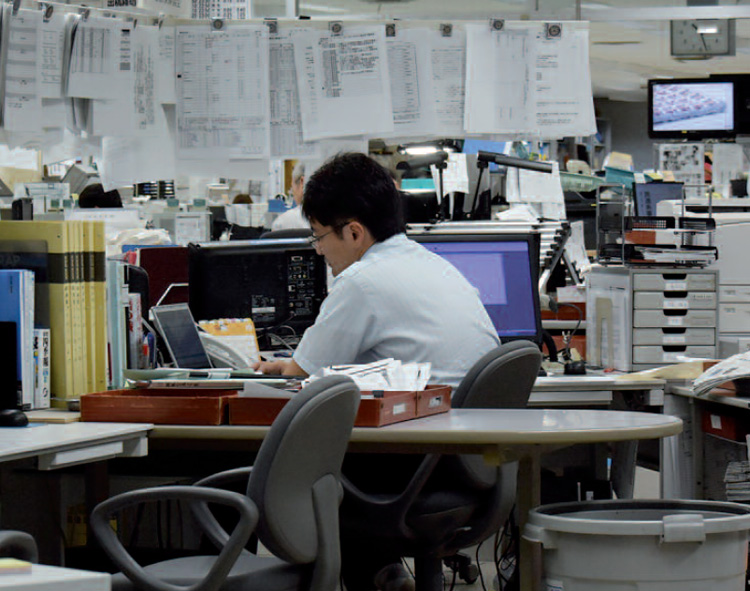 The competitive selection process for Hokkaido Shimbun journalists is among the toughest in the profession.

The Hokkaido Shimbun is the leading daily newspaper on this northern island and this is a position it knows how to foster.

ituated in the heart of Sapporo, the principal city and political centre of the island, the Hokkaido Shimbun building, better known by its nickname Doshin, is not noticeable for original architecture. From afar, it’s no different from any other office building. Only the 7 ideograms that make up the company’s name let you know that you are standing in front of the island’s eponymous principal daily newspaper, an institution whose influence is nation-wide, and which is respected throughout the Japanese press. With a wealth of experience gained over its 130 years of existence, the newspaper has managed to hold its own alongside the big national titles – Yomiuri Shimbun, Asahi Shimbun, Mainichi Shimbun, Nihon Keizai Shimbun – while still keeping its share of more than 71% of the local market with a circulation of over a million copies of its morning edition (chokan) and more than 450,000 copies of its afternoon edition (yukan). “We’re very proud that our circulation is 2.5 times higher than other newspapers,” states Nueno Takaharu, the paper’s head of communication. “Even if our sales are dipping like other newspapers, we’ve succeeded in maintaining our lead over our rivals.” To achieve this, the Hokkaido Shimbun depends on an extensive network of local offices, allowing it to offer a wide ranging content that is capable of responding to the expectations of its readership, which is spread out over a vast area. Its eight regional branches (Hakodate, Muroran, Otaru, Tomakomai, Asahikawa, Kitami, Kushiro and Obihiro) consisting of 10 to 20 people, and 39 local offices with 2 to 3 journalists, form a dense network thanks to which nothing escapes the notice of the editorial teams. This helps forge a strong connection between the readers and their newspaper as 60% of them have subscribed to it for more than 20 years. But this daily newspaper, created by merging 11 local papers in November 1942, after the authorities of the day decided that there should be only one main newspaper per region, doesn’t regard itself as simply a regional publication. With seven foreign correspondents (Washington, Seoul, Beijing, Bangkok, London, Moscow and Yuzhno-Sakhalinsk), the intention of the Hokkaido Shimbun is also to keep its readers, who understand the importance of keeping up to date with developments and news in other parts of the world, informed about international events. The creation of a bureau in Yuzhno-Sakhalinsk, the administrative capital of the island of Sakhalin, is the best example of this intent, as this region of Russia situated close to Hokkaido is an important outlet for local business, and it also means it’s easier to learn more about the situation in southern Kuril Islands, annexed by the Soviet Union at the end of the Second World War and disputed by Japan ever since. These “Northern Territories” (hoppo ryodo) as they are known in Japan, are important because, over and above the diplomatic aspect, the situation has a bearing on the economy (fishing, development), history and culture of Hokkaido. The subject has been followed particularly closely by the Hokkaido Shimbun. In 2013, the articles it had published over a period of two years about the Russian-Japanese territorial dispute led to it being awarded the journalism prize for the best series by the Japan Newspaper Publishers and Editors Association. The high quality of its news content is recognised across the archipelago, and the Hokkaido Shimbun is referred to frequently in radio and television press reviews.

“A newspaper should attach great importance to a critical and questioning approach, and never lose sight of that in any circumstance. First hand reporting is also crucial. The idea of a publication that’s closely connected to its readers should also be a top priority. That’s what makes up Doshin’s DNA”. That perfectly sums up this daily newspaper’s philosophy, which isn’t content just to report random facts and local events. Over the past decades, it has distinguished itself due to its investigations, scoops and commitment to regional reporting. The failure of the Hokkaido Takushoku Bank due to its bad debts in November 1997 was the opportunity for the newspaper to distinguish itself by the publication of numerous exclusive reports. Its investigative work about the presumed corruption of the local police in 2003 reinforced its reputation as a daily newspaper in search of the truth. “We hold a neutral position politically,” confides Nueno Takaharu. “That doesn’t prevent us from from taking a firm stand on subjects we think are of importance for the region or the country.” This is the reason the Hokkaido Shimbun expressed its opposition to the Trans-Pacific Partnership, the free-trade agreement between the United States and eleven countries in the Asia-Pacific region, including Japan. Even though Donald Trump decided to withdraw from the agreement at the beginning of 2017, the Japanese government took the initiative to relaunch it, which was not well received by local farmers who were worried about the impact an open market would have on their production. Remaining loyal to the principle of close contact with their readership, the newspaper often highlights the negative effects this agreement could have on Hokkaido’s economy, particularly its agriculture, which represents 13.2% of the country’s agricultural revenue, far more than any other prefecture. It’s also number one in regard to its fishing industry, with its 19.4% share of the national revenue in this sector. So it’s not unusual for the Hokkaido Shimbun to make its voice heard concerning this subject, just as it does about sensitive subjects such as transport, notably railways. The increase in railway lines being closed down by the JR Hokkaido Railway Company or the creation of a high speed rail connection so that Sapporo is less than four hours away from Tokyo often make the headlines in the newspaper. “They are the subjects that interest the locals and spark debate. They are in support of the highspeed train as it will open up the region and bring in tourists. We’re not on the same wave length as many of our readers who live outside Sapporo,” recognizes Nueno Takaharu, though he remains aware that the economic future of the region depends largely on developing tourism. The Hokkaido Shimbun is also taking a stand on the closure of railway lines, while recalling that the matter is also “the responsibility of the State”. Indeed, the newspaper considers that without support JR Hokkaido cannot maintain a railway network exposed to weather conditions that are so much harsher than elsewhere in the country. 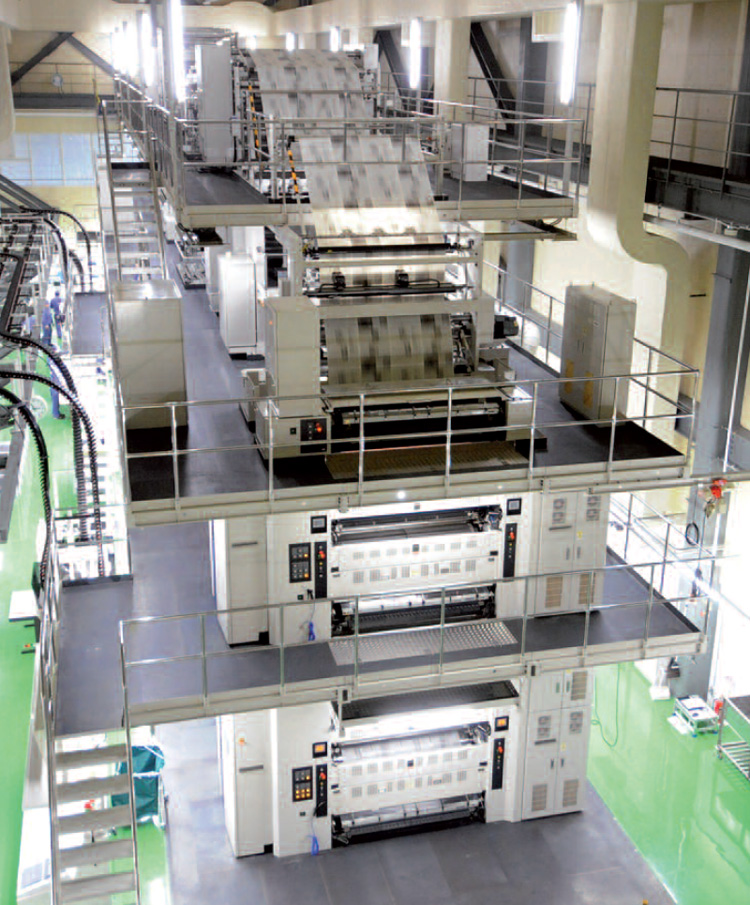 Today, the Hokkaido Shimbun has 1,378 employees.

The deterioration in the transport system reflects another, more serious problem – an ageing population. Of course, the whole of the country is concerned with this phenomenon, but specially Hokkaido with 29.7% of its population over the age of 65, while the national average is 27.2%. “The average age of our readers is around 60, according to the latest survey of our readership,” Nueno Takaharu confirms. He’s worried about the increasing numbers of young people leaving the prefecture in search of wider horizons. “That’s why we are focusing on the local economy and emphasizing how dynamic it is, especially with its SMEs (small and medium-sized enterprises). The growth in trade between Hokkaido and South East Asia encouraged us to open a bureau in Bangkok, Thailand, in 2016, to take advantage of this development,” he says. A healthy regional economy will help rejuvenate the population. Besides, the Hokkaido Shimbun is depending on young people to avoid a drop in its circulation. “We are organizing events in an attempt to encourage their interest in news,” says the paper’s head of communication. One of these initiatives was the launch of a weekly supplement, Manabun, a portmanteau word made up of the verb manabu (to learn) and the term bun from shimbun (newspaper), which aims to help parents encourage their children to read newspapers. The creation, in 2006, of a readers club and its mascot Bunchan, a very kawaii (cute), childlike character, is part of this attempt to fan the flame. The newspaper’s online presence (www.hokkaido-np.co.jp) since 1996 shows it knows how to remain relevant while not losing its soul. It’s a difficult balancing act, and requires continuous commitment from all those who still believe that their newspaper can be part of the development of this beautiful region and its many charms. The Hokkaido Shimbun will not cease in its efforts to safeguard and showcase them throughout the year.