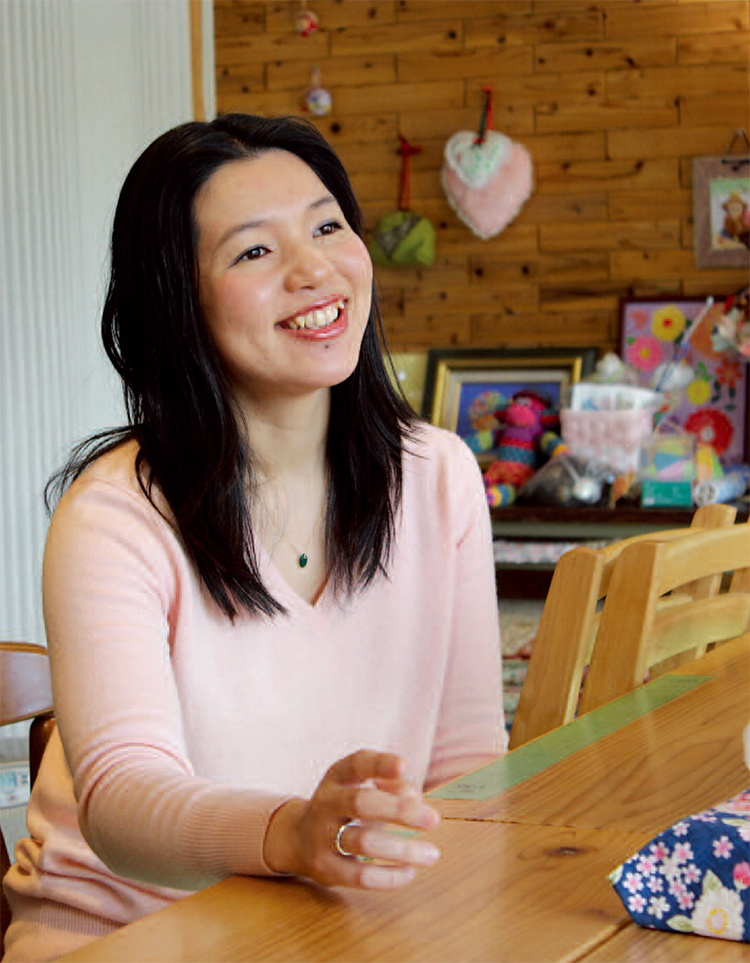 After arriving in Niigata as a volunteer a few days after the tragedy of 11 March 2011, Nishimura Mayumi decided to live here.

The tsunami that followed the earthquake on 11 March 2011 did not only destroy buildings. The region’s inhabitants were dispersed, and communal life almost fell apart. When reconstruction work began, it was felt that a new sense of community was needed to bring together both those who had stayed, and those who had left and returned. “I’ve always tried to help people with connections to the region of their birth,” explains Nishimura Mayumi, who, just after the earthquake took place, arrived to help people as a member of a victim support group. Today, in 2018, she’s still in Ishinomaki, continuing to support local inhabitants in an independent capacity.

She was born in Gokase-cho, a village in the Kyushu mountains in the extreme south of Japan (see pp. 18-21) where she was educated at primary school level in a class of just 12 pupils. At secondary school, she joined the only club (table-tennis), and had to catch a bus to school everyday as it was so far from her home. That didn’t prevent her, even at such a young age, from wanting to go to university. Her curiosity led her to researching countries around the world, not only focusing on their individual attributes but also on their conflicts and levels of poverty. She wanted to “change all that”, but her parents did not want her to go abroad, or to settle in Tokyo.

While keeping her wish to “study abroad” secret, she enrolled at Kita-Kyushu Municipal University to study international relations in the modern languages department, where there were many foreign students. After she had also joined a United Nations club to improve her knowledge of the world, she went on a tour of India. She remained very open to new experiences, and this gave her the opportunity to become fully aware of the hard reality of the world, in particular, the situation of the child who had been her guide and found her accommodation throughout her journey, who had to sleep on the ground in the street. International aid organisations specify that their recruits should be competent people who “above all, must be responsible adults”. That’s why, after completing her university studies, she found employment in Tokyo as an insurance company salesperson. Four years later, she started working for the international NGO, JEN, which offers help to political refugees, among others. Following that, while she was working on the reconstruction of villages in the vicinity of Niigata devastated by the earthquake of July 2007, the Tohoku region was laid waste by the 2011 earthquake.

She immediately made her way there, and continued to work for JEN until October 2015. However, Nishimura Mayumi resigned in September 2015, sensing differences between those working on the ground and the Tokyo headoffice. She was aware of the limits to what she could achieve working for the organisation, and when it was time for her to be transferred, she preferred to leave, believing “it was up to me to decide to do what I thought was necessary for Ishinomaki”. So she became completely immersed in her work, mainly concentrating on the Kamikama district situated in the centre of Ishinomaki, one of the worst hit areas. She set up the group “Those who love Kamikama” to publish material and historical documents about the district. She’s still very involved in the region after all these years, and believes that “the most important thing is to always take into account that one’s attachment to a region is a personal matter”. Her belief in the region’s potential is stronger than ever. “Though each individual on their own is weak, together we can succeed in changing the region. It’s useless complaining about what we lack, because Ishinomaki has loads of good qualities to help it bounce back,” she assures us.