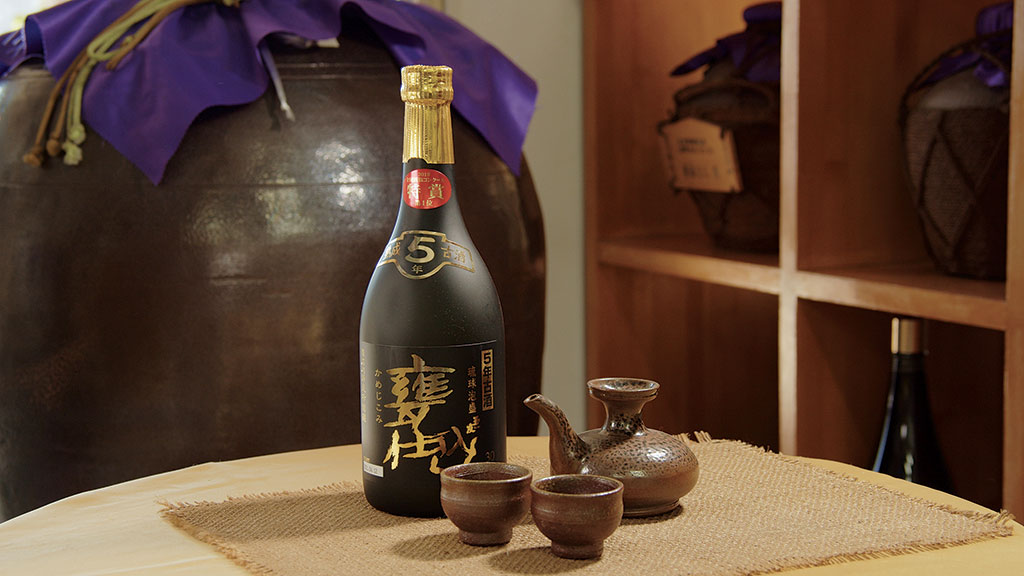 Awamori aged for 5 years in a pot (kamejikomi) produced by the Ishikawa distillery.

In the space of just a few years, Ishikawa Yumiko has established herself as one of its foremost experts.

Okinawa stands out among Japanese prefectures as a culturally and gastronomically peculiar place. Its distinct food-and-drink culture is famous around the country, and its distilled alcoholic beverage awamori is part of its appeal. Made with long- grain Indica rice and black koji mould, awamori used to be an aristocratic drink that was meant to be consumed only by the elite of the Ryukyu Kingdom. With the archipelago’s annexation by Japan, and the subsequent explosion in the number of distilleries, it has finally become the “people’s drink” par excellence.

Ishikawa Distillery (www.kamejikomi.com) is one of the places that keeps the awamori tradition alive to this day. Founded on Okinawa’s main island in 1949, they still use their large earthenware pots to age the liquor instead of the stainless-steel tanks currently favoured by most companies. “We are very particular about preserving our traditional methods,” says Ishikawa Yumiko (no relation to the company’s founder), the distillery’s main blender. “Since the jars are fixed to the floor, it takes a lot of time and effort to clean them, but it’s a price we gladly pay to achieve the best results.”

Freshly distilled awamori is temporarily stored in the jars and after a few months, the miikajaa (new scent) disappears. This process has a positive effect on subsequent aging. “I check the taste and aroma of all jars twice a year before blending them,” Ishikawa says. “The interesting thing about jar storage is that each pot gives awamori a different aroma, sweetness, and bitterness. My job is to know each jar’s unique characteristics and judge their degree of compatibility. Interestingly, there are no rules about how to create a good batch of awamori.”

Though tradition is important, the people at Ishikawa are always looking to introduce new and better ingredients. Recently, for example, they stared work on making a new awamori using rice from Hyogo Prefecture, which contains fewer pesticides. 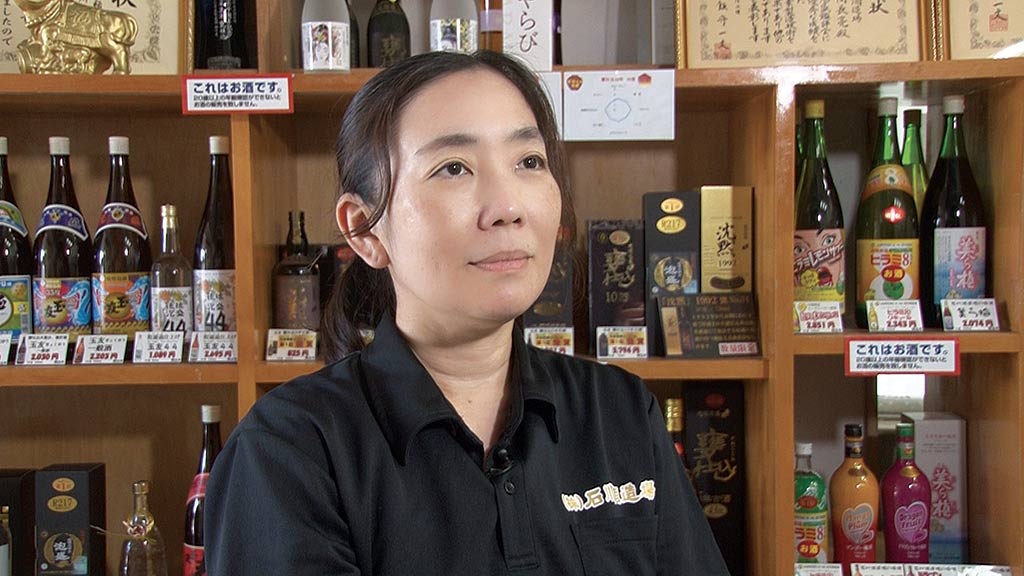 ishikawa Yumiko was one of the first women to become an awamori master blender.

Yumiko is one of the key members of the 21-people-strong awamori-making team.
In 2020, she was awarded the Awamori Blender of the Year prize at the 2nd Awamori Review Meeting for her Tamatomo Jar-Distilled Treasured Koshu, an aged awamori with a slight bitterness, which is the result of adding flavours such as caramel and dried fruits. Koshu (literally “old liquor,” pronounced kusu in Okinawa) is awamori that has been aged for at least three years. “If you lay down awamori to let it age, it loses its roughness and becomes softer and sweeter,” Yumiko says.

Even now women only make up a tiny part of the awamori-making industry, so when Yumiko was hired 21 years ago she was a real rarity. “During my school days I had learned a little about food-making but I knew nothing about spirits,” she says. “When I finished university, I had an opportunity to visit the Ishikawa Distillery. I found it fascinating, and decided that I wanted to work in this field.”

Yumiko says that even now it’s not easy for a woman to work in this environment and, anyway, few companies hire women. “First of all, it’s a job that takes a toll on your body,” she says. “You need a lot of physical strength and stamina as it gets very hot in summer.

“Now, of course, I don’t need to worry anymore about how I’m regarded by the men around me. Experience is essential for blending old sake of different ages and predicting the new taste and aroma, and having done this job for a long time I have more experience than many of my colleagues. Also, my work has been recognised and I’ve won prizes. At this stage, any talk of being a man or a woman becomes pointless. In the end, everybody is welcome as long as they can do a good job.”

‘Blending in’ awamori refers to the task of mixing sake of different ages to adjust the flavour.

“This job is a fairly recent one,” Yumiko says. “I like it because it allows me to experiment and be creative. I like the idea of mixing different spirits, playing with them and trying to make something special, something different, which defies expectations. Aged awamori has a special charm, but too much emphasis is placed on the value of age alone. What is really important for me is how the different flavours can be blended to obtain even better results.”

For example, the Tamatomo Awamori that won the prestigious prize in 2020 contains 89.3% of 11-year-old sake and 10.7% of 23-year-old sake. “The 23-year-old sake has a rich aroma like high-quality honey, but the taste is a little lack- ing in punch. Therefore, I came up with the idea of combining it with 11-year-old sake, which has a modest aroma but a strong sweetness and taste. As a bonus, the combination brought out an aroma of sweet vanilla that couldn’t be found in either of the koshu.”

Yumiko admits that when she first joined the company, she was confused by techniques that were not detailed in any manual. “This is the kind of work that you can only master through trial and error,” she says. “When I started working here, I tasted all the sake in the cellar and gradually got acquainted with the palette of aromas and flavours I would be working with. Even now, I always check all the sake in the brewery twice a year and collect taste data.”

Sinceawamorihasbecomemorepopular,Yumiko is increasingly asked about food pairing. “Basically, there are two types of awamori,” she says. “One-year-old awamori is easy to drink and ideal for meals. So-called koshu, on the other hand, has a stronger taste and flavour. However, it goes well with fish dishes or something high in protein. It goes very well with bitter chocolate too.”

In the old days, when awamori was only consumed in Okinawa, it had a reputation for being a rough, strong-smelling, hard-to-drink spirit. Also, as Chris Bunting writes in Drinking Japan, “A sort of unstated (…) code had developed, under which the distilleries did not try (…) to seek outlets on each other’s turf”. This lack of competition had damaged the overall quality of awamori. However, since the end of the last century, manufacturers have made more effort to enter new markets, both in Japan and overseas. This has resulted in smoother, sweet-flavoured, easier-to-drink varieties that increasingly appeal to women and young people.

As for Yumiko, she says that she is always aiming for something that while easy to drink, has the power to leave an impression. “I’m always on the look out for the rough diamonds; the odd batches that at first may not taste right but are full of possibilities and, when blended with other sake, can flourish into something outstanding.”

Though the Ishikawa Distillery is especially famous for its awamori, they produce other spirits too. A recent addition to the distillery’s lineup is craft gin, which was first introduced into the Japanese market in 2016 and is now produced by some 30 distilleries. Ishikawa started developing its own variety in 2017 and released its first product one year later. “It’s called Navy Strength Craft Gin,” says Taira Tomonori, who is in charge of the gin-making operations. “The name derives from the fact that in the old days, sailors would bring gin on board during their long voyages, and it was so strong that it could be mistaken for gunpowder.” Indeed, Ishikawa’s draft gin has an ABV (Alcohol By Volume) of 57%.

“It is a fruity and spicy gin made with nine types of fruits and herbs. Four of them in particular are unique to Okinawa, like kabuchi (a small green mandarin), karaki (Okinawa cinnamon) and citrus tankan. The aroma and taste change depending on the ingredients harvested each year.”