The celebrated spa is well-known as a place that has succeeded in preserving the atmosphere of the Edo era. 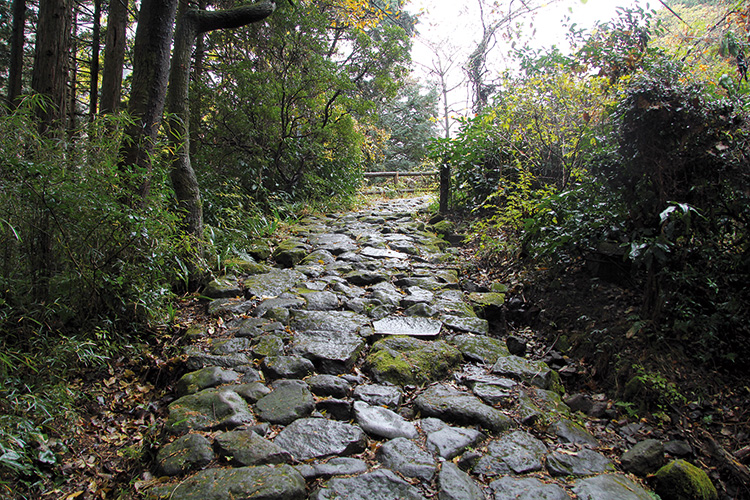 For two and a half centuries, Sakaichi-zake and its irregular paving stones was the only way to get to Kyoto.

With its hundred-year-old traditional inns, hot-water springs, lush landscape and views over Mount Fuji, the Hakone spa, situated an hour and a half to the west of Tokyo, is a favourite destination for travellers and Tokyo inhabitants badly in need of rest and nature. It attracts some 20 million tourists every year. what is less well known is that it was of historic importance during the Edo period (1603-1868), and, to this day, there is a great deal of evidence of this to be seen in its many perfectly preserved locations. undoubtedly, the most obvious example is Hakone Hachiri, registered as a National Heritage site in 2018. Hakone Hachiri was a key stage on the Tokaido road, a major trading route before the Meiji Restoration, which is 492 kilometres in length and which, at that time, linked kyoto to Edo, Tokyo’s former name. Fifty-three stopping-places are dotted along the road, many of which have become famous and have often been cited in poems or depicted in engravings. without doubt, the most celebrated evocation of them all is still The Fifty- Three Stations of Tokaido series of wood-cut prints by uTAGAwA Hiroshige. Contemporary eye-witness accounts of the road have been carefully preserved to the present day. The Hakone section, which connects the towns of odawara and Mishima, was considered the most difficult to travel along. “For a long time, these towns were control-points,” explains SuwAMA Jun, director of the odawara Castle Museum. “After this check-point was abolished, people began to move to live and profit from the flourishing economy in the region. Transport networks were developed and multiplied, which encouraged trade.” The name Hakone Hachiri is made up of two parts: hachi (eight) and ri (a unit of length). This stage extends exactly 32 kilometres from odawarajuku station on the Tokyo side, to Mishimashuku on the Hakone side, at an altitude of 846 metres above sea level. “It’s the only place in Japan that offers us this kind of testimony to the Edo era,” he continues. It’s true that the route has been preserved as it was at that period: castles, stop-over towns, tea houses, paved paths, 100- year-old cedar trees and checkpoints. Everything has been perfectly maintained as in days gone by. on this particular day, it’s cold and a light rain falls on our shoulders. The Hakone Hachiri leg of the journey has earned its reputation for being demanding. Enormous, irregularly-shaped paving stones form the sloping, narrow pathway running along this part of the route, offering multiple opportunities to twist your ankle. It’s difficult to imagine that a few hundred years ago, this was a busy trading route, almost like a motorway, frequented by travellers carrying heavy loads, carts brimming over with goods, horses, and sedan chairs transporting high-ranking people. But let’s continue on our way. A pleasing scent of damp wood emanates from the hundred-year-old cedars. As it’s autumn, the leaves on the trees are suffused with hues of yellow, red and ochre, and almost make us forget the wet paving stones, which up to now, have made walking difficult. OWADA koichi, an expert on the history of Tokaido and director of the former Hakone checkpoint, which is now a museum, takes out a pair of rice-straw sandals from his rucksack: “These are waraji,” he explains. “In the Edo period, travellers wore them so they didn’t slip on the paving-stones, and they were very effective. If the bad weather lasted the whole of the thirteen days it took to make the journey, they needed to change them often, every two or three days.”

Hakone Hashiri was an important stage in the journey as it was the the point of entry and exit to the capital. “It was easier to enter than leave Edo, especially for women, who were more restricted than men,” stresses owADA koichi. “There were different rules depending on the checkpoint and its location in the Archipelago. The residents of Edo rarely left the capital and made little use of the road except in exceptional circumstances such as for funerals, to visit temples or to go to the hot-water springs in Hakone, whose use was mainly therapeutic. It was necessary to obtain an official pass to travel through the different Tokaido checkpoints, and the rules at Hakone were particularly strict and harsh. It was known for being one of the most restrictive of the 53 checkpoints then in Japan.”

Built 400 years ago by the Tokugawa shogunate (military dictatorship) to defend Edo, the Hakone checkpoint (sekisho) located beside Ashinoko Lake was one of the largest at the time. Anyone attempting to travel illegally was liable to incur the death penalty. “It even included an execution chamber. It was a radical solution, which was very rarely used by the authorities, but it was there. In the registers we found 5 cases of people condemned to death.” once this checkpoint had been negotiated, it was time to take a deep breath and rest awhile before continuing on the long route to reach kyoto. Travellers were able to relax along the journey at the charming little teahouses where they could eat something and warm themselves up.

In addition to local produce, each stop along the route also had a whole range of different souvenirs on offer, original products made by skilled artisans. In this way, over the centuries, Hakone Hachiri developed its own particular local culture, which is fiercely protected to this day as a precious testimony to this hectic life of yesteryear. YAMAMOTO Satoshi represents the third generation of owners of the Amasake-chaya tea house, situated a few steps away from the Hakone checkpoint. we have come to warm up around the irori, a traditional Japanese sunken hearth, which has been here for over 400 years. This tea house first opened its doors around 1600, at the start of the Edo era. “My family have been able to keep this place going thanks to the loyalty of our visitors,” explains this father of three. Before taking on the family business at the age of 30, he worked in the kitchen of a traditional Japanese restaurant in kyoto. He had no doubts that he would “some day take up the reins of the family’s tea house.” with the advent of modern roads during the Meiji Restoration, the little teahouse experienced difficult periods when they had to survive with “just one customer every 10 days or so.” Amasakechaya is the last teahouse along this stretch of the road that has overcome the years of difficulty, thanks to the perseverance of this family. They have tirelessly promoted its signature drink: homemade amazake, a sweetened drink made with non-alcoholic fermented rice following a traditional method, as well as chikara mochi, a sticky rice paste toasted over a wood fire. “we’ve had a lot of encouragement up to now. It’s very rare for customers to come here just by chance; they usually know about the long history of our teahouse. Many people are still interested in the history of the Tokaido road and continue to walk along it to soak up the atmosphere.” After a long walk, “you want to eat something sweet. For me, the rule is not to betray the confidence of our customers and to always offer them the best drink we can make.” To achieve this, YAMAMOTO Satoshi gets up at dawn every day to prepare the drinks and open the teahouse, without fail, at 6 o’clock in the morning. Establishments like the Amasake-chaya teahouse and the sheer willpower of their owners helped this dynamic trade route to flourish. Stopping-places, funded by the shogunate, were built all along the route in order to make travel easier and to help trade. The point of departure from Hakone Hachiri, the fortified town of odawara, was, unquestionably, one of the most important transit-points. with 90 shops, it was best known throughout the archipelago for its kamaboko, a kind of fish paste used in many Japanese dishes. Twelve brands specialising in its production have set up here here over the centuries, creating the kamaboko Road! This still exists, thanks to the tenacity of a handful of entrepreneurs. Kamaboko is in decline in Japan, but in odawara it has made a particularly successful comeback and has become the cornerstone of several producers. “Historically, odawara is a fishing village,” says TASHIRO Moritaka. “Buri (yellowtail fish) was particularly abundant. This was what allowed the town to develop, even define its identity. Kamaboko is a very healthy food, which goes fantastically well with sake.” Since 2014, young artisans have formed a group to revitalise the kamaboko Road, and they aim to put on numerous events in support. “we want to relaunch this place, for example by recreating scenes of times gone by in the Edo and Meiji periods when odawara was still a small fishing village. We’re convinced odawara’s strength lies in its roots.”

The history of the Hakone region would not be complete if we omitted its famous hot-water springs. The spa’s very first bath house opened in the Nara period (710-794), and the famous Seven Hot Springs of Hakone would have particularly appealed to the crowds during the Edo period, due to the growing reputation of their therapeutic merits. After the Restoration of Meiji, the bathhouses increasingly developed. as they benefitted from better access. The owners of traditional inns invited the best architects in the country in order to renovate their buildings and transform some of them into wooden buildings several storeys high. This happened to Bansuiro Fukuzumi, which had been in existence since 1625. It draws its water from the oldest hot spring in Hakone.

FUKUZUMI Haruhiko, its director, agrees to take us to see this famous spring, however, we’re not allowed to film or photograph it. Behind a double- padlocked iron door leading to the interior of the rock, the heat from the volcanic water rises and warms our cheeks. “It’s best to climb down the ladder and get closer to see it,” he smiles. The walls of the cave are hot and moist as we approach the water of this spring, which is now just a few metres below our feet. Here, in the palm of one’s hand, is water that’s almost 50°C and has been curing physical ailments for centuries.

▶︎HOW TO GET THERE
FROM TOKYO, the easiest way is to take the Odakyu line from Shinjuku to Hakone-Yumoto.
For a journey to remember, think about travelling on the Romancecar express train (75 minutes, ¥2280/£15.70), a Japanese railway legend.
(www.odakyu.jp/english/romancecar)