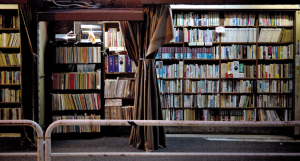 There are many bookshops in this area situated in the heart of the capital, where Chinese revolutionaries used to come a century ago to form their plans.

Along the docks of the Seine in Paris, tourists often stop and leaf through the second-hand books on sale. The booksellers’ lack of courtesy is probably as famous as the green colour of their stalls. If you are not too worried about being told off by one of the charming booksellers who seem to get upset so easily, you may sometimes come across some rare editions, or books that have been long out of print. However, nowadays the internet makes finding old books much easier, and there is no need to deal with disagreeable booksellers anymore. In Tokyo, the bookstalls are not concentrated along the Sumida, and most of the owners are friendly and helpful.

Many book shops and stalls are situated in Jimbocho and a most enjoyable time can be spent in the capital of Japan visiting the shops selling second-hand or new books. There was a time when students used to meet there in the search for out of print books, or simply to stand and read (tachiyomi) the latest edition of their favourite magazine. As in most Japanese bookshops, you are allowed to read a book or a magazine as long as you do not damage it. Although there are fewer than in the past, students still crowd around the new manga deliveries to learn about the latest adventures of their favourite character. But nowadays the young prefer to meet in Akihabara, formerly a Mecca for fanatics of electronics, before transforming itself in the past few years into a cult area for lovers of manga and video games.
Jimbocho has lost a bit of its youthful character since then. Most of its visitors are in their mid thirties or older but age does not matter; what counts is the pleasure in acquiring a book while strolling among the piles, which spill out onto the pavement between the bookstalls.

Unlike many other noise-filled places in Tokyo, one of Jimbocho characteristics is its silence that suits the books perfectly. On leaving the underground at Jimbocho station (Hanzomon or Mita lines) the silence can be disconcerting, but you rapidly get used to it. The mind can then focus on what is essential, getting to know the 160 book shops in the area. You will find them on the high street and the smaller streets, such as Yasukunidori, the long and winding avenue that crosses Jimbocho. Some resemble conventional book shops but others take up just a dozen square meters in a building. That is why you need to pay attention if you are looking for one address in particular, especially if the bookseller has opened his shop at the top of an improbably winding staircase.
Herein lies the charm of the place, which can divert your attention. If you like the printed word, especially old examples of the printed word, then you may come across some unexpected treasures in one of these literary Aladdin’s caves. And not just books written in Japanese either!
It would be a lie to pretend that they have thousands of foreign language books, but out of the millions of piled up books, there are hundreds that are very rare, and not necessarily expensive, just waiting to find an owner.

If you are looking for one book in particular, it is best to prepare the ground by targeting the bookshops that might have it. Indeed, most of the shops specialise. There are those that focus on religion, others on photography or architecture. Some were opened especially for music lovers on the lookout for old magazines about their favourite singer. There is something for everyone and at all prices. Yagichi Tetsuya owns a bookshop which bears his name. It is in a a prime position on Yasukunidori, towards Kudanshita (A3 exit at Jimbocho, 50 m away on the left hand pavement, open every day from 11 am to 6 pm) and his shop is the place to go if you are a fan of Japanese and Western cinema. “I love chatting with the customers about our common passion: cinema,” he says with a smile. Rest assured, even if you are not the biggest fan of cinema, you will get a warm welcome and you will be allowed to rummage around to find a book, a script, or a photograph that you may end up deciding you cannot leave behind. You might come across an old magazine for 500 yen [approximately £ 3.80], or a flyer for the release of Tulipe Noire with Alain Delon at Hibiya’s Scala cinema dating back to 18 April 1964 for 20,000 yen [£ 154]. This French actor is still a celebrity in Japan. And if you prefer music or, more precisely, Japanese rock, then go to Rockonking (A7 exit at Jimbocho, second street on the left, just 150 meters away on the right hand pavement). Situated on the second floor of a small building, this little bookshop is crammed with treasures for fans of X Japan or Luna Sea. Like many book shops, the opening hours (advertised as from Monday to Saturday, 1pm – 7pm and Sundays 12pm – 5pm) fluctuate, especially towards closing time. Confronted with these masses of books, often written in Japanese, you may sometimes feel a bit lost and hesitate in continuing your exploration of the many bookshops, including those that resemble cupboards opening onto the street. In these, you cannot touch the books, because they are piled up in a very special way. Usually, the available books have a yellow ticket displaying the title. These piles are very impressive and make wonderful photographs (see the next page).
Nevertheless, there is little chance you will come across photography books in these highly specialised bookshops. Instead, go to Bondi Books (A1 exit at Jimbocho, 10 meters from the exit, open every day from 1pm to 7pm, Mondays and Tuesdays by appointment. Phone 04-3556-9299) managed by Josh Carey. You will find all sorts of unique and rare books, which goes some way towards explaining their incredible prices. The original edition of Robert Franck’s “The Americans” (1959) is on sale for 840,000 yen (£ 6,469), that works out at approximately £ 80 per page.

We This, too, is something you see every day in Jimbocho, small ordinary looking bookshops that conceal real treasures. This area, situated near several universities, used to a place where young intellectuals would meet up. Iwanami Shoten, the publisher who played a crucial role in distributing foreign literature and helped spearhead political and philosophical debates in Japan, is also situated nearby. This is where the Sekai review was founded

in December 1945, a few months after the surrender of Japan, to which all the most famous writers in the country contributed and still do today. The monthly exists to this day and continues to pursue its pacifist, anti-imperialist, anti-nuclear and anti-globalisation agenda. Despite the drop in its readership that followed the progressive decrease of young people in the area, it is still the place for debates and discussions. The publisher opened Iawanami Hall (A6 exit at Jimbocho) in February 1968 (the golden age in which everything was subject to debate), a movie theatre which screens mainly foriegn films that will usually never be shown anywhere else. It is a good opportunity for a break (1800 yen for entrance, 1500 yen if bought in advance) when you are feeling a little homesick, or when you get fed up of seeing Chinese characters in the bookshops. Indeed, Chinese characters (kanji) are present everywhere in the area, as were the Chinese themselves at the beginning of the 20th century. At that time, Japan had been the dominant military power facing China (since 1895) and Russia (1904-1905), and appeared to be the model to follow for young Chinese wishing to escape the Western imperialist yoke. That is why thousands of them left their home country to come and study in Tokyo. Among them were a some well-known figures such as Zhou Enlai, Mao Zedong’s prime minister, and Lu Xun, considered to be one of the founders of contemporary Chinese literature.
The latter spent three years in Jimbocho, then called “the foreign student quarter” or “Chinatown”. Although it has nothing to do with the Chinese quarters that existed (and still exist) in the port cities of Japan (Yokohama, Kobe, and Nagasaki) that are mostly crowded with restaurants and shops.
Above all though, the Chinese intellectuals residing in Jimbocho during the first half of the last century played a considerable role in the emergence of Chinese selfawareness and helped to foster a growing desire for revolution.

One of the quarter’s most famous residents was none other than Sun Yat-sen, who contributed much to the Chinese revolution in 1911 and became the first president of the Republic of China (1911-1912). His political involvement is closely related to Jimbocho where the first issue of the review “Minbao” was printed in 1905. Very few traces of this Chinese presence remain, apart from a little stele in Anzen park (A3 exit at Jimbocho, towards Kudanshita, second street on the right then approximately 100 meters further on), a reminder that Zhou En-lai studied in this place. A Chinese restaurant, the Hanyanglou founded in 1911, still exists near Anzen Park. All the rest disappeared in the 1923 earthquake, and then during the Second World War.
There are still, nevertheless, two Chinese bookshops to be found in Jimbocho. Toho and Uchiyama, both opened much later, contain large collections of books of the greatest importance on ancient and contemporary China. Here is a place that confirms that a book is a wonderful way to travel.