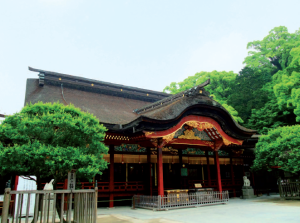 Just twenty minutes from Fukuoka, this beautiful sanctuary is the result of a most fantastic story.

The story of this shrine is one of the most extraordinary. It concerns a gifted child who became an outstanding scholar, poet and statesman. It also involves political skullduggery, tragedy, magical realism and the supernatural. It is also a tale that still inspires thousands of young Japanese today. It all started in Kyoto in 845 during the Heian Era (797-1185) when Michizane Sugawara was born into a scholarly family with a tradition of service to the Emperor. From an early age Michizane loved plum trees. He was just five when he wrote a famous waka poem: “How beautiful the red plum blossom, I wish to colour my cheeks with it”. By the age of eleven he was composing poetry in Chinese characters, for which he showed an extraordinary talent. He later proved to be equally gifted as a statesman and rose to a position of influence in the Imperial Court, then dominated by the Fujiwara clan.

According to Miki Teicki’s Short Biographies of Eminent Japanese in Ancient and Modern Times (1890), when Emperor Daigo ascended the throne in 898, “the retiring emperor advised him to entrust all important affairs to Michizane because he was first in knowledge and age”. The Fujiwara clan became highly jealous and conspired with Minamoto-no-Hikaru, another jealous rival, to convince the emperor that Michizane was plotting against him. They succeeded in getting Michizane banished to govern the distant outpost of Dazaifu. He abandoned Kyoto in tears and bid farewell to his favourite plum tree, writing in another poem: “if the east wind blows this way/ Oh blossoms of the plum tree/ Send your fragrance to me/ Never forget the Spring/ Even though your master is no longer here”.
However, this is where the story gets surreal. The legend maintains that Michizane’s beloved plum tree missed him so much that it uprooted itself and flew to Dazaifu to be with him. This tree, known as the tobiume or flying plum tree, still stands to the right of the Honden (Main Shrine) at Dazaifu.
In 903, after fewer than three years languishing in the sorrowful hardship of exile, Michizane died in Dazaifu (many say of homesickness), aged 57. His funeral procession consisted of just his loyal follower, Yasuyuki Umasake, and a few neighbours. His coffin was carried on a wagon hauled by a humble ox but at one point along the route, the ox suddenly lay down and refused to budge. This was taken as a sign and Michizane was buried where the ox had stopped. A bronze statue of the exhausted ox lies on that spot today in the grounds of the Dazaifu Tenmangu shrine, its horns and head shiny from the visitors’ custom of stroking them for good luck. Two years after Michizane’s death, Umasake built the first shrine there and in 919 the Fujiwara clan built a larger shrine over his grave, but it was later burned down in one of Japan’s civil wars. Meanwhile, back in Kyoto, spooky things started happening. Disasters struck some of those who had plotted against Michizane. The emperor’s palace burned down in a fire triggered by lightning, Fujiwara no Tokihira, Michizane’s chief rival, died of a mysterious disease, a Fujiwara official was struck dead in a storm and the son of Emperor Uda became so ill he had to retire. Many came to believe that these disasters were caused by Michizane’s wrathful ghost, wreaking revenge on those who had cut short his career and his life. To appease his spirit, the splendid Kitano Tenmangu shrine was built in his honour near Kyoto. Emperor Ichijo restored Michizane to his former office and rank and later promoted him to the highest office. Ultimately he was deified and worshipped as a god, under the name of Tenman Dai-jizai Itoku Tenjin – Heaven-pervading Almighty and All-glorious Deity,
or Tenman Tenjin for short.

Michizane became such a revered figure that, as Miki Teiichi wrote: “Scarcely is there a town in which his temple is not seen”. In Japan today there are over 10,000 Tenmangu shrines dedicated to his deified spirit, which is still worshipped as the patron deity of learning, literature and calligraphy. Tenmangu shrines are always characterized by their plum trees and statues of oxen. Even if your student days are long gone, Dazaifu Tenmangu Shrine, just a twenty-minute train ride from central Fukuoka, is still a must-see. It is Japan’s foremost Tenjin shrine and a National Treasure. It gets particularly crowded around university entrance exam time, when students flock there in their thousands to pray for success. About 250 metres from Dazaifu Station you pass under a giant torii spanning the shrine approach road, which is a long street crammed with traditional-style shops selling typical wares, from Hakata dolls, fans and kimono to assorted bags of dried fish, chikuwa fish cakes and umegae-mochi rice cakes.

Before you even reach the shrine, the natural beauty of the extensive 81-acre grounds is spiritually inspirational. To honour Michizane’s love of plum blossom, over 6,000 plum trees grow there, making a spectacular sight in late-February to mid-March. Ancient kusunoki (camphor) trees also abound, including one towering specimen, to the left of the shrine, thought to be over 1,000 years old. This means that the Battle of Hastings (1066) wasn’t even at the planning stage when this mighty tree first photosynthesized! You’ll come across lots of animal statues too and aside from the weary ox (don’t forget to give it a pat for good luck), there are birds, deer and a large Kirin, a fearsome mythological beast which looks like a cross between a lion and a unicorn.

The path takes you over the crimson Taikobashi – a two-arched bridge symbolizing past, present and future – which spans the delightful Shinji Pond and its islets. The pond is shaped like the kanji for shin (heart) and fountains play on the waters shared by turtles, swans and koi. To the right of Taikobashi lies the tranquil Shoubuike iris pond.

As you approach the magnificent shrine building, take a good look at the plum tree to the right. This is the legendary tobiume, the one said to have flown here to be with Michizane, which makes it even older than the camphor tree. It is said that tobiume is always the first plum tree to blossom in early January each year. On the left stands another plum tree donated by the mother of Emperor Taisho as a prayer for his recovery. The main shrine building you see today dates from 1591. With its red columns, gold leaf patterns and colossal, sweeping roof, this gorgeously ornate structure is a stunning example of Momoyama period architecture (1573-1603). Another eye-catching feature is the two colourful seated archers who guard the shrine gates that replaced the pair of Nio (those huge, halfnaked musclemen usually seen guarding Buddhist temples) in the Meiji Era. Around the shrine you’ll see shops selling good luck charms, many of which are related to passing exams. Traditionally students left their calligraphy brushes hanging at the shrine for good luck but today it is more usual to hang little wooden ema charms. As you take in the heavenly wonders of Dazaifu Tenmangu, it is worth remembering that Michizane is celebrated as a man pure of heart. And as for all those 10th century disasters? Chinese writer Chiang Yee wrote: “I don’t think…Michizane’s spirit…caused those calamities, for he showed no grievances during his years of exile”. Indeed, it is said that he devoted his time in exile to study rather than plotting revenge or harbouring hatred for those who had exiled him, fitting behaviour for one who would become the heavenly patron of learning.