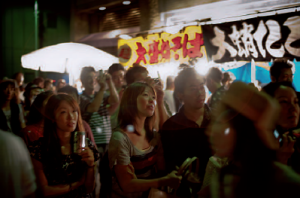 The combination of an ageing population and a rural exodus is threatening the existence of matsuri in the provinces.

As summer approaches Iwai Toshio gets out his blue vest decorated with traditional patterns from his cupboard – a special costume worn at matsuri – and gives it a good shake. A private but happy moment for this 75 year old farmer, it is the first step in preparing for the Hitoboshi festival. This is an event that officially marks the start of summer for the inhabitants of Nanmoku, a small village nestling in the mountain region of Gunma Prefecture, north of Tokyo. Every year in August, during the warm nights, the villagers and tourists congregate by a river and watch a pyrotechnic firework show, the highlight of this matsuri. Two or three men standing on a bridge spin lighted bundles of hay with all their might. The fire pierces the darkness of the night, tracing two to three metre wide circles of light in the air. This show is then followed by a parade, accompanied by the beat of drums and the sound of flutes, that wends its way up to a temple, the spiritual centre of Nanmoku. Yet this tradition, whose origins date back to the 16th century, is under threat as the population of Ohinata, the district that organizes this event, has been steadily decreasing for decades. “Young people have left the village and gradually Nanmoku is emptying. It’s very difficult to keep up this tradition” Mr Iwai, the person in charge of organizing the festival, tells us. “It’s one of the last community activities of its kind that still takes place in this district. We had to give up other events because of the lack of people, but this one, we can’t let this one fail” he adds.

The ageing population and the depopulation of rural areas are cancers gnawing away at the Land of the Rising Sun, and the trend is hitting this little village hard. Here more than 55% of the population is over 64 years old, a level that means Nanmoku is the oldest town in Japan. In the absence of new blood the locals are having a hard time continuing their matsuri. Those who used to impress the tourists with their performance on the bridge no longer have the strength to take part. “We are proud of this matsuri, it’s listed as a cultural heritage for the prefecture. I’m determined to keep it going for as long as possible” insists Iwai Toshio in the accent typical of this mountain region. Shiraishi Atsushi, a member of the Nanmoku Chamber of Commerce responsible for the planning of other village matsuri, is pessimistic about the future of this tradition. “The situation is very difficult. We fear it will disappear” he explains simply. “Also, the population here is decreasing year by year. There are few steps we can take to prevent it” he continues. He’s resigned to the fact that depopulation is a reality, and it’s a reminder that Nanmoku is categorized as a genkai-shuraku (threatened locality), a sociological term describing communities where the population over 64 reaches the 50% threshold. This statistical euphemism means that this town of over 2,000 people cannot ensure the basic needs of its inhabitants, such as weddings, funerals and education. The figures don’t lie, and in the space of forty years the population of Nanmoku has decreased by a factor of four.

This village’s predicament is only the tip of the iceberg. In 2011 the Ministry of Internal Affairs published shocking figures: nationally more than 10,000 towns were listed as genkai-shuraku. It was estimated that 2,300 would disappear sooner or later, and a hundred have already been wiped off the map since 2007. Needless to say, when a community dies so do its culture and traditions, including its matsuri. The lack of reliable statistics means no-one knows how many of these festivals have already disappeared. In the light of these alarming facts the ministry has promised measures to counteract the effects of an ageing population in order to safeguard rural traditions. The government will support projects aiming to revitalize the worst affected regions to the tune of £2.5 million per year. However, “this financial aid will not be enough to stem the disappearance of matsuri” reckons Nakane Hiroshi, a researcher for Japan Tourism Marketing, a think tank dealing with tourism. Why? Because the root of the problem lies in the bigger cities where most of the population is concentrated. Young people simply do not return home once they’ve moved to a city like Tokyo to work or study. This is a national phenomenon that’s been evident for over half a century. “It’s the flip side of economic growth” is Nakane’s analysis. If we want local matsuri to survive this situation it would require reviewing the whole structure of Japan’s society and applying practical measures against population ageing and depopulation. It is obvious that the influx of people into the larger cities needs to be reversed. This is where Mr Nakane sees a role for matsuri. “If we manage to restore the status of the provinces with the help of matsuri, we could encourage young people to settle in rural areas”. This is clearly easier said than done and, far from that being the case, cities like Tokyo, Nagoya and Osaka continue to absorb people from other regions in large numbers. In 2013 the number of people moving to the capital exceeded the number of people leaving Tokyo by 70,000. This has been a firmly entrenched trend for twenty years and does not augur well for the future of regional matsuri, though they are part of an ancestral tradition.