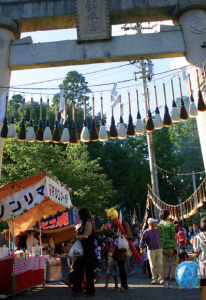 The spirit of the paintbrush is celebrated annually just twenty kilometres from Hiroshima.

In the soft morning drizzle a dozen men and women line up before an altar-like mound of stones where a small fire crackles and hisses. Each person in turn throws a handful of old brushes into the blaze. Collective rubbish disposal? No – this is ritual cremation. “It’s to honour the souls of the brushes, for the work they’ve done” a man explains. Used brushes from all over Japan are brought here to end their days. The Brush Pyre is a key event in the Fude no Matsuri, or “Brush Festival”, in Kumano, a mountain town 20km east of Hiroshima. It’s held on September the 23rd — the autumn equinox — a national holiday in Japan when the souls of the dead are believed to revisit their earthly homes. To those of us caught up in the lemming-like rush of modern life, where we rarely take time to show gratitude to people around us, much less to inanimate objects, the Kumano townsfolk’s reverential respect for a humble brush may seem quaint. However, in a country where gods are believed to dwell in rocks, trees and rivers, it is not so surprising that the spirit of the brush is such a palpable force in Kumano. After all, the town is almost entirely dependent on its calligraphy brush industry. Alongside the Brush Pyre stands the Fudezuka stone tablet, Kumano’s most iconic monument, commemorating the town’s first brushmakers. The words carved into the stone read: “A brush dances to the wind of the heart”. Kumano is one of those rare instances where a town has become a brand name, synonymous with quality brushes. Of Kumano’s 27,000 inhabitants, 1,500 are fude-shi, or brush-making craftsmen. The town turns out a staggering 15 million brushes a year — 80% of Japan’s total production. The government has even recognized Kumano’s brush industry as a Traditional Industrial Art. When Japan won the Women’s Football World Cup in 2011, then Prime Minister Naoto Kan presented the team members with a set of Kumano make-up brushes. Chief Cabinet Secretary Yukio Edano said the brushes “showcase Japan’s traditional craftsmanship and global brand power”. So how did it all start? “It began about 175 years ago, towards the end of the Edo era (1603-1867)” explains Shin Takemori, president of Chikuhodo Ltd, founded in 1952 and one of Kumano’s 80 family-run brush-making companies. “This is a mountainous area, with little flat land for farming, so it was hard to survive in winter. To make ends meet, many men used to go off to Nara Prefecture to work in forestry.

They’d buy calligraphy brushes there and re-sell them on returning to Kumano”. Around 1840 some enterprising farmers decided to learn how to make the brushes themselves. They combined different brush-making techniques they’d learned on their travels, and developed the unique Kumano method. In 1877 the introduction of compulsory education, including calligraphy, triggered a surge in demand for calligraphy brushes. As sales soared the reputation of Kumano’s distinctive brushes began to spread. A brand was born. In more recent times, faced with declining demand for calligraphy brushes, Chikuhodo and many other Kumano companies have turned to producing high-end make-up brushes, while still using the traditional artisanal technique. Thanks to this adaptability Kumano’s brush industry has survived and thrived, producing brushes for cosmetics, painting and even medical purposes. Today Kumano brushes are exported all over the world and are used by people from all walks of life, from Japanese schoolchildren to European artists and American fashion models. Mr Takemori’s Chikuhodo company now employs over 100 workers. But what makes Kumano brushes so special? “Touch them and see!” Takemori says. He’s right: they’re so silky soft it’s like brushing your cheeks with rose petals. “Even today, Kumano brushes are all handmade” he adds with pride. “That’s the secret of their softness”. You can witness this time-honoured technique at Kumano’s Fude-no-sato Kobo Brush Museum, where local craftsmen are in residence to give demonstrations. The museum also houses the world’s largest calligraphy brush — a massive 3.7 metres long and weighing 400 kilos — suspended from the ceiling. While there, take a break at the museum’s excellent restaurant and sample some traditional dishes, like green-tea soba, tempura and local Inland Sea specialty, anago meshi (conger eel and rice). Kumano brushes are one of Hiroshima’s most sought-after souvenirs, so don’t leave without visiting the museum shop. They’ll engrave your name on the brush of your choice. Or how about a “birth fude” – a special brush for your baby’s hair? They’ll even make you a souvenir brush FROM your baby’s first hair. As the Japanese proverb says: A brush that writes beautiful letters will make for a bright child. You can also try your hand at making your own brush. Outside the museum the early morning rain has stopped by noon — just as NHK TV predicted with its usual accuracy.

The mountain air is alive with the smoky tang of yakisoba noodles, octopus dumplings and skewered squid sizzling on grills at colourful yatai (food stalls). At other stalls local companies sell their brushes at knockdown prices. Food aside, the festival is a vibrant celebration dedicated to the Spirit of the Brush and all things calligraphic. Thousands of visitors from all over Japan come to enjoy exhibitions, calligraphy writing contests and demonstrations of sumi-e (traditional ink drawing). It’s quite uncanny to watch an expert’s hand conjure a perfect bamboo grove with just a few magical strokes — brush and ink seeming to act with a life of their own. As the inscription says, the brush really does dance to the wind of the heart. If you prefer something more hands-on, a host of young volunteers are standing by to help young and old alike learn some basic calligraphy strokes, practise a little sumi-e, or design their own postcards with Japanese stone-paint. The heart of the festival is the 10th century Sakakiyama Shrine. Like many old shrines it lies at the top of a steep hill. There are ninety-nine steps to the top, up the path known as Brush Avenue, which is festooned with 10,000 brushes — some pencil-thin, others as big as brooms — all hanging down around head-height, “so everyone can touch them” as Takemori says. At the bottom of the steps clusters of brilliant red spider lilies bob about, “fluttering and dancing in the breeze”, as the poet Wordsworth put it. They only bloom around late September, hence they are given the name higan bana (equinox flowers). At the top, alongside the shrine, a magnificent gnarled cedar towers over the torii gate, looking as though it’s been there longer than the shrine itself. Blue tarpaulins stretch out on the ground around the shrine, displaying all manner of antique goods and old curiosities for sale.

Mr Takemori explains that “years ago there were virtually no shops in small towns like Kumano, so the stalls and flea markets which sprang up at festival time provided people with a rare opportunity to see and buy new things”. The festival’s high spot is a calligraphy demonstration by a master calligrapher on the broad esplanade below the shrine. Like a Japanese Jackson Pollock the master paces barefoot around his “canvas” — a large vinyl sheet spread on the ground — in a balletic whirl, wielding a heavy brush longer than his arm while an assistant stands by with an ink-pot as big as a barrel. In great graceful strokes the master composes his message. Each year the task falls to a different master and their message is eagerly awaited by the onlookers. One year it was a typically enigmatic haiku from legendary hermit poet Matsuo Basho: “This road, no one is going, autumn evening”. Another year, a message of solidarity with the victims of the Fukushima earthquake and in yet another a simple prayer of gratitude to the Fude no Kokoro (Spirit of the Brush). Once it is finished the message is then hung up for all to view. As the master bows to the crowd and the applause fades, an explosion of fireworks heralds the arrival of a boisterous procession led by a brightly-decorated bamboo boat. Inside is the kami, or spirit of the local deity. Men in colourful happi coats chant as they haul it up Brush Avenue — all ninety- nine steps —back to the shrine. There the kami will rest until the next autumn equinox, when Kumano will once more fall under the Spirit of the Brush.