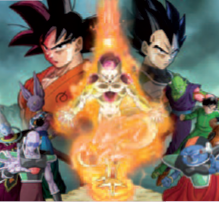 It’s no surprise to anyone that Resurrection F signals the return of the saga’s most symbolic protagonist. Years after Trunks crushing victory, the remnants of the tyrant’s army have not disappeared completely but remain at the edge of the galaxy. Its new leader a rather ridiculous despot called Sorbet, fails in his attempts at conquest so decides to return to Earth to summon Shenron and revive his master. Thus freezer returns to the world of the living once again, and takes the opportunity to build up his strength for several months to take his revenge. Resurrecting an old acquaintance, however iconic, is not enough to reassure aficionados of the saga who were let down by the previous film. It is undeniable that Kami to Kami was very disappointing, mainly due to its lack of action and absence of battle scenes. This new feature-film doesn’t make the same mistake. The focus is only put on a few main characters, allowing the battle scenes to unfold properly and build up the tension. When we reach the final battle it turns out to be very representative of the kind of action which made the comic series so successful. This is a film that returns to the series’ previous form, without forgetting to in troduce a n up-to-date touch.
Though fukkatsu no F never quite matches up to the nostalgia we feel, the result is, nevertheless, very successful.