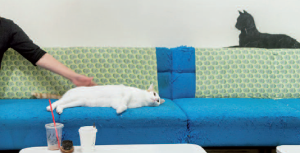 Not everyone is allowed to keep pets, but the Japanese have found a way around the problem.

An acute sense of alienation and isolation is one of the unwelcome by-products of modern urban life, and Japanese cities like Tokyo, Osaka and Nagoya see extreme examples of the problems many people face while living in “crowded solitude”. In a country where more and more people decide not to get married, let alone have children, many single people and couples decide to devote their time, energy and money to pets. But what if you are not allowed to keep one at home? In most Japanese rental apartments keeping a dog or a cat is forbidden (well, it might upset your neighbours!). Luckily, in the last ten years lonely and stressed out people have found a solution to this lack of animal companionship by going to a cat cafe. Though the world’s first cat cafe opened in 1998 in Taipei, Taiwan, the concept really took off in Japan after 2005, and these establishments have appeared everywhere.

From 2005 to 2010, 79 cat cafes opened across the country, and today there are an estimated 150. A typical cafe is a small apartment or shop where cats provide customers the kind of relaxing companionship they probably can’t find anywhere else. Despite the name, many cafes hardly serve any food or drink, and they can be considered more as a form of supervised indoor pet rental. Each cafe usually has between 15 and 25 cats of different ages, sizes, breeds and levels of friendliness, but some have as many as 50. They usually provide you with a ‘menu’ (often bilingual) introducing each cat with a photo, name, birthday, and a bit of information about its personality. This being Japan, most establishments are very clean and their cats are very well groomed and well cared for. All are required to obtain a licence and comply with the strict requirements and regulations of the nation’s Animal Treatment and Protection Law. However, in some very rare cases the cats seem to be a little disturbed and not very happy, and many animal-rights and animal-protection groups have complained about the long business hours. For example, though pet shops can’t display their animals after 8.00 pm, these cafes are generally allowed to stay open until 10.00 pm because many customers come in the evening – probably to relieve their work-related stress. Some places feature specific categories of cats, such as black cats or rare breed cats. They are generally purebreds purchased from a pet shop or breeder. A notable exception is the Neco Republic chain that specializes in cats from rescue shelters. Apparently Japan has a dire stray cat problem and unfortunately most cats that end up in shelters are put down. Neco Republic works with volunteers to help raise money and spread awareness of the problem. Their ultimate goal is to find a home for all these cats, as each of them is available for adoption. The chain’s first two branches opened last year in Gifu and Osaka (together they have already managed to place about 140 cats in new homes), and a third shop recently opened in central Tokyo.

In order to get a feel for what actually happens in a cat cafe, Zoom Japan visited Nyafe Melange, an attractive cafe in Ebisu, near Shibuya. Opened in 2009, this is one of the older cat cafes in Japan, and its large playroom has a welcoming, cozy feel. At first glance it looks like an ordinary living room, with bookcases, sofas and coffee tables, but there are also dozens of custom-made shelves and tiny stools on which the 22 resident felines can sit comfortably and preside over cafe business. You don’t need to order a drink, although you can get coffee or tea if you like. On the day of our visit the overall atmosphere is very quiet, with the cats lazing around the room, either napping or grooming themselves. There are about a dozen people here today, and the clientele is mainly people in their late 20s and early 30s who work in the neighbourhood. We are told that they get more couples visiting at the weekends. Even foreign customers seem to be on the rise. Each person interacts with the animals in their own way. One girl moves around the room with a stick, trying to get the cats to chase her; a couple sit at a table and chat while they stroke cats on their laps and another woman crouches on the floor and just watches the cats as they walk around her. According to Akimoto Yumi, the cafe manager, the customers’ average stay is about 90 minutes, but my impression is that unless you are willing to stay for longer and take your time to befriend the house cats and get into their good books, most of them are going to ignore you unless you lure them with the promise of food. They are cats, after all… “It’s very interesting to see how people interact with the cats,” says Akimoto. “Many of them, for instance, spend their time taking pictures or drawing the cats. Newcomers look kind of surprised because of the rather unfamiliar situation and just sit there, stunned”.

The reason for this is probably that most of these people have never had a pet cat or even touched one before, and they sometimes don’t know how to deal with the unpredictable behaviour of real cats. “Many customers seem to be quite shy,” says Akimoto. “That’s why newcomers often don’t have the courage to go up to a cat and play with it, preferring to read a book and sip coffee, secretly hoping that one of the cats will take a liking to them and come closer”. According to one of the staff, those who come in groups are generally more cheerful and talk a lot, using the cafe as a place to catch up with friends. “For them the cat factor is an added bonus, and the way they nonchalantly grab the cat toys lying around and play with the cats probably contributes to their higher rate of success,” she says. “It’s as if the cats are more attracted to those people who don’t go out of their way to grab their attention”. Apparently cat cafes even make excellent dating places. “Many of the couples who come here seem to be in new relationships or are still at the friendship stage,” another staff member says, “and use the cats to bridge the awkward distance between them”. When asked about the reason for cat cafes’ great success in Japan, Akimoto points out a couple of things most media seldom mention. “First of all, Japanese people are painfully shy, especially when they step out of their close circle of family and friends. You’ll never see someone having a casual conversation with a stranger on the bus or in a cafe. Even neighbours rarely go beyond a quick chat about the weather (a favourite topic of conversation in Japan). So I guess the wordless, tactile communication with cats is a great source of comfort for these people”. “Also, in a sense it’s not simply about the animals. Places like this cafe provide an oasis of peace and quiet, away from the traffic noise and Tokyo’s hectic life. When you consider that many of these people have to force themselves to go to and from work on overcrowded trains and buses every day, it’s easy to understand why many are attracted by cat or other animal cafes”. Apparently there are some people who sometimes take a day off sick and stay all day in cafes like Hapineko. “A woman once told me that there are days when dealing with the stress and workload is just too much, and she needs some time out,” Akimoto says. “I’m just happy our cats can provide such people with a little peace of mind”.