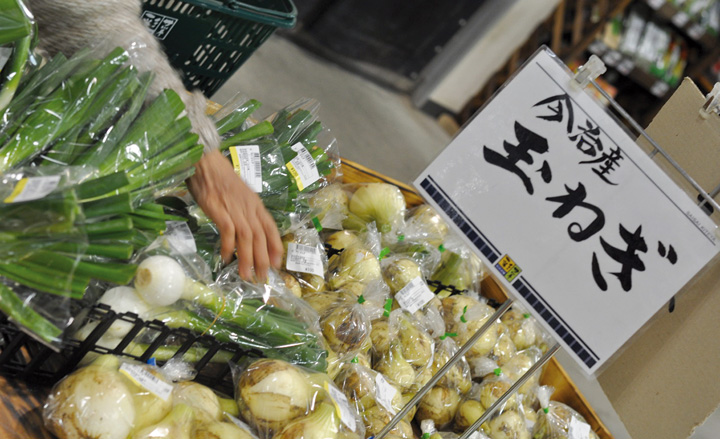 This town’s farmers have found a winning recipe in their search to promote local growth and supply good quality food.

These days everybody seems to be talking about Imabari. The second largest city in Ehime Prefecture is home to a large number of maritime facilities, but it’s not its trading or shipbuilding activities that have caught people’s attention recently, it’s something closer to their stomachs. Since the 1980s, Imabari has been actively promoting and supporting organic agriculture as a way to achieve both healthier eating habits and a stronger, more sustainable economy. One man in particular, Yasui Takashi, is behind the “chisan chishou” slogan (local production for local consumption) that sums up this new trend. This 55-year-old head of a local branch of Imabari City Hall has become a sought-after champion of a new system, which seeks to provide local schools with agricultural produce grown according to organic or quasi-organic methods. Yasui-san was kind enough to answer a few questions about his philosophy.

Tell me a little about your background.

Yasui Takashi: While studying agriculture in college, I became interested in organic farming. After graduating I spent time in Kumamoto and Saitama Prefectures to learn their growing methods with the intention of applying them later in Imabari. Therefore, when the better food for school lunches movement arose, I was very keen to help. Luckily they caught the Town Hall’s attention, so we were able to gather together several people and acquire the resources to put the ideas into practice.

In other words, it all started with school lunches?

Y. T.: Yes, all those mothers had kids who were attending the elementary school. They were particularly concerned about the food their children were eating at that time. Currently, the food you find in school lunches is usually purchased from central markets located in the big cities (e.g. Tsukiji in Tokyo). In other words, vegetables, fruits, fish and other products are grown or caught locally, and then sent to these central distribution places. The main reasoning behind this system is that few places are completely selfreliant when it comes to food supply. So you could say it’s an unavoidable evil. The fact remains, though, that people (and children in particular) end up eating food they know nothing about.

Recently, more and more people have been striving to follow Imabari’s example. What should they do to get their voice heard?

Y. T.: I think PTA members can play a very important role. After all, it’s the parents who pay for school lunches, so they have the best chance to get the authorities’ attention. As long as the families are willing to pay a little more in order to get organic food on their kids’ plates, I don’t see why the authorities shouldn’t agree with their request. That’s how everything started in Imabari. Our PTA was strong and motivated enough to attract a growing number of local groups. Eventually these mothers were able to meet the mayor and convince him. Of course, the presence of an enthusiastic and committed nutritionist in the school can also play an important part in the project’s success.

Can you give me an idea of what you have actually achieved in practical terms?

Y. T.: Currently 100% or our rice is locally produced and consumed. Also, 80% of our bread is made with locally grown wheat and nearly 100% of our tofu is made with local soya beans. As for vegetables, 4.1% come from Imabari’s organic production, 56.6% from the city’s quasi-organic fields and a further 7.8% from within Ehime Prefecture. The parents are so happy with the results that they don’t mind paying more for better quality food. Of course, this is the fruit of a rather long process. In my opinion, it’s important to understand that you don’t get results quickly. For one thing, organic agriculture takes time, and some farmers have never tried it before. My advice is to start with one thing, e.g. potatoes, and progress from there, little by little.

Did you find any resistance from the agricultural cooperatives who make a lot of money selling pesticides and other chemicals?

Y. T.: Actually we have never really dealt with them. Instead, we spent a lot of time and energy convincing greengrocers and markets to carry organic vegetables. It’s taken about two years, but now many of them seem to like our ideas.

What major goals have you achieved through this grass-roots movement?

Y. T.: I believe that developing the kind of production and consumption methods we managed to put together in Imabari was one of the key factors in establishing an independent, selfreliant regional economy. It’s also the best way to achieve two important things: On the one hand we can educate our children about a healthy diet, and on the other, we can implement an economic system where sellers and buyers belong to the same local market and don’t have to pass through big national distributors, thus ensuring that the locally-produced wealth stays here. What I really hope to achieve is to turn our children into responsible eaters and consumers, who will come to love our city and region, and support our local economy.