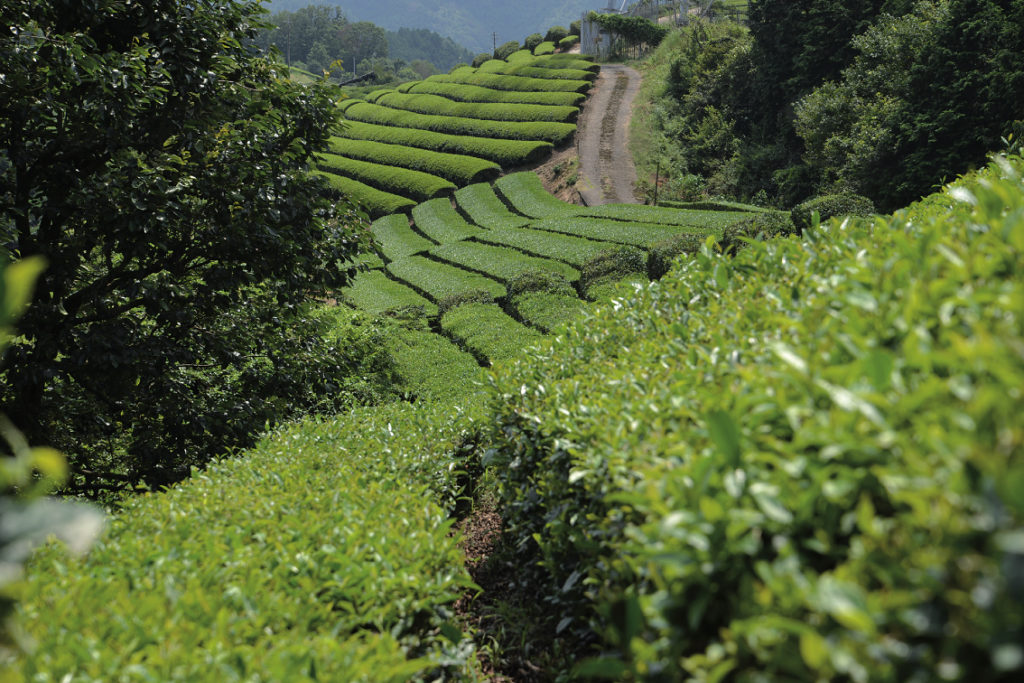 The Japanese really know how to enjoy tea, and cultivation knowledge gained gradually over time has become a true art form.

How do you make your guests happy with one sip of tea? He’d thought long and hard all his life to find the most pleasurable way of drinking it”. This passage from the novel Rikyu Ni Tazuneyo (Visiting Master Rikyu) by Yamamoto Kenichi conveys well the emotion that surrounds this beverage, around which the Japanese have built a whole art form in the tea ceremony (cha no yu) created by Sen no Rikyu. Despite the spiritual, almost religious aspect of preparing and drinking tea in Japan, we must not forget that consumption of this beverage only began recently. Although historians are starting to agree that tea was most probably introduced into Japan in the Nara period (710-794), most books on the subject claim that it was in 805, when the monk Saicho returned from China and brought back a tea plant, which he then planted in the gardens in Hiyoshi (Hiyoshi chaen) in Otsu, Shiga Prefecture. Ten years later, after having tasted the beverage in a Buddhist temple, the Emperor Saga (786-842) gave the command to have the plant cultivated in the regions around Kyoto, and even in the capital where he lived. This is why tea plantations in this area are still some of the most famous in the country. One of the places chosen was the town of Koka in Shiga Prefecture, where some of the best producers can be found. Yamamotoen (275-1 Kami Asamiya, Shigarakicho, Koka, www.yamamotoen.co.jp) is one of them, and while strolling across their magnificent tea plantation, we are transported back in time.

However, the Japanese population’s first encounter with tea did not immediately engender the popularity that it has today, as the way it was prepared originally produced a pungent smell that put many off. It was three centuries later when Eizai, another Buddhist monk who is credited with introducing the Rinzai sect of Zen Buddhism to Japan, brought over a different method of making tea from China and revolutionised peiple’s reception of the beverage. Steaming the leaves before drying, then grinding them into a powder gave rise to matcha, which remains a favourite to this day. Around the same time, Eisai also published the Kissa yojoki (Treatise on the Preservation of Health through the Drinking of Tea) after having successfully treated the shogun with the help of this beverage. Nowadays the health and nutritional benefits from the active ingredients in tea are widely known. The generic term “green tea” covers many different varieties, (Including Yutaka midori, Okumidori, Asatsuyu, Kanaya midori, Benifuki, Yabukita, Sae midori, Sayama kaori, Oiwase and Goko), which give each tea blend its own flavour depending on how it is prepared. In Japan green tea is not fermented, with the tea leaves heated (roasted in an oven or steamed) to prevent the fermentation process. This gives each variety its own particular character and makes for intense moments of pleasure for anyone who drinks a mouthful. Such a moment goes beyond the satisfaction of just quenching one’s thirst.