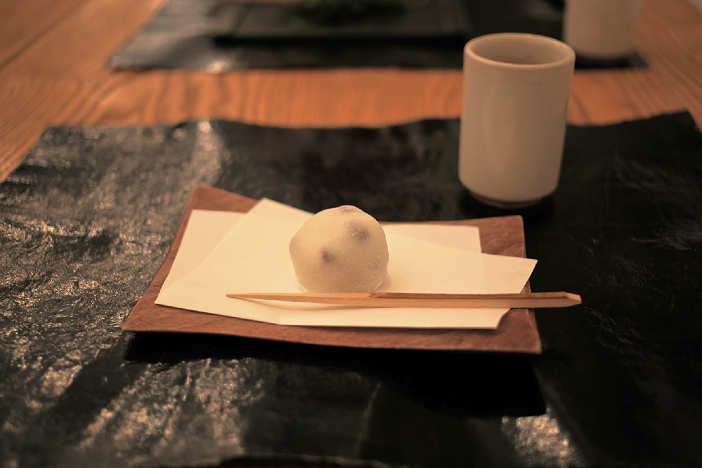 There’s nothing like Japanese confectionary to accompany a cup of tea. Don’t miss out on a visit to Higashiya.

Talk about Japanese green tea and wagashi immediately come to mind. After all, these beautiful and exquisitely made traditional sweets complement the beverage perfectly. Though wagashi have been around for at least 300 years, and are now an important part of Japanese cuisine, local sweet-makers are always eager to experiment and try new approaches to the art of confectionary. One such innovator is self-styled “lifestyle designer” Ogata Shinichiro. Starting out as an interior designer, Ogata has successfully branched out into product design (kitchenware and pottery) and the restaurant business, treating each activity as part of the same vision. “Using Japanese sensibilities and my own design philosophy as a base, my aim is to revitalize Japanese food culture, reinterpreting traditional ingredients, treating food and tableware as a single entity, and re-capturing the primeval act of ‘eating’” Ogata says. “My mission is to stimulate the evolution of traditional Japanese things to keep them relevant to present-day life. In this regard, food and eating play a fundamental role because they are at the heart of Japanese culture”.

Asked why he was attracted to sweets, Ogata points to the long traditions of washoku (Japanese cuisine). “Eating is a daily activity that is essential to our well being. At the same time, washoku is famous for using seasonal ingredients and taking extra care in “food design”. All these things can be found in confectionary too. On the other hand, I realized that the old way of sweet-making didn’t reflect modern life anymore, and there was still room for change”. Ogata admits that changing the centuries old Japanese confectionary tradition was a real challenge. “Until now, you had two main approaches to wagashi culture. On one hand, the stylish, dignified shops with a long history of making sweets for important ceremonies and family events; on the other hand, the humble neighbourhood store selling dango (dumplings made with rice flour, covered in a variety of seasonings and served on a skewer) and other cheap sweets. Recently, though, most people have begun to regard western sweets as the norm, and only buy wagashi for special occasions. My aim was to combine the best of both and adapt the wagashi tradition to suit the present day”. Ogata believes that he has probably succeeded because he is an outsider and was able to think out of the box, doing things an insider would never dare to do. “After all, I don’t even make the sweets myself,” he says. “But that doesn’t matter either. I’m like an architect who comes up with a project and then asks the carpenters to actually build a house. And speaking of architecture and design, I believe that in order to innovate you need to create a new environment. That’s why I opened a number of restaurants, shops and tea bars”.

Arguably the most famous of Ogata’s creations is Higashiya, a ‘modern tea room’ whose interior is clearly influenced by a traditional aesthetic sense, free from unnecessary decoration. Located on Chuodori, the main street in the upmarket Ginza district, in the same building as renowned cosmetics emporium Pola, here you can choose from among 30 types of Japanese tea, from elegant matcha to the stronger gyokuro tea. However, people are especially attracted to the wide range of delicious-looking sweets. Higashiya’s selection of what Ogata calls ‘everyday sweets’ is carefully balanced between old favourites and original creations (all inspired by regional specialties), and there is always something new to discover, like a green tea-flavoured blancmange (a soft cooked pudding) or a special monaka made of two black and white wafer cakes filled with bean paste and flavoured with spices such as cinnamon, cloves or cardamom.

Ogata is especially famous for creating what he has christened hitokuchi-gashi (bite-sized sweets) and asa-namagashi (freshly made sweets), smaller, organically shaped variations of traditional creations, often filled with surprising ingredients that go well beyond the usual red-bean paste. “You can find delicious manju and daifuku (rice cake stuffed with bean jam) in many places. But for me, traditional sweets don’t really fit in with our life and times,” Ogata says. “What would Japanese sweets have to be like today? The key, in my opinion, is their size. If you want to change the perception of food, you have to change its size. Once the size changes, the taste changes as well. This is how my sweets came into being, as a slightly smaller version of the traditional Japanese cakes. Too big, and they don’t look good; too small and they lack impact. They have to be the right size to suit contemporary eyes and taste buds”.

Even though Higashiya’s teas are often outshone by the shop’s sweets, they do play an important role in the wagashi experience. Ogata explains that in order to create a new style of tea, he had all his equipment custom-made. “Measuring cups and mixing glasses are made of white porcelain for serving delicious tea and sake, and for making the procedure look beautiful,” he explains. “As a matter of course, the tea utensils are carefully chosen as well. The vessel makes the taste – its feel in the hand, on the lips, and its texture and weight. As the body uses all five senses to relish what is being served, they should be aroused by the most appropriate dishes”.

Once a great admirer of western design, Ogata has become a staunch defender of Japanese culture. “When I was young and didn’t know much about the world, I longed for western design. However, I later realized that the most amazing cultural things were actually those around me at home, not those from overseas. In the past, Japanese culture has continually influenced western culture and art, and even now it is indispensable in a world seeking balance between mankind and nature. I continually strive to express this in my own way, through food, tableware and space”.