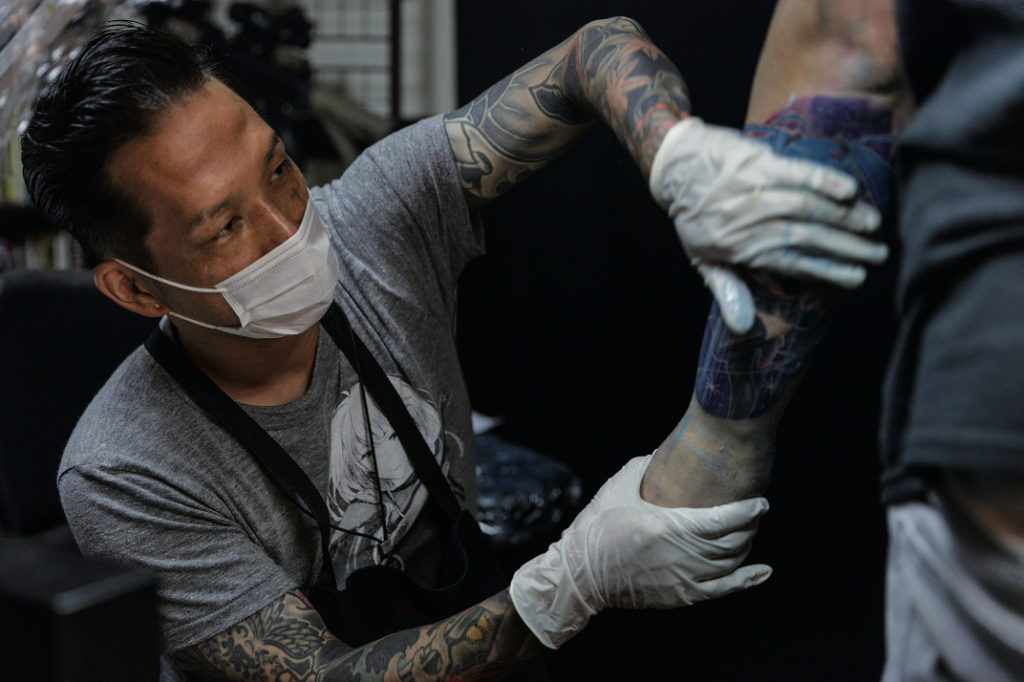 Once or twice a week Aki Bonten is asked for tattoos inspired by manga or anime.

Aki Bonten is certain that otaku culture will help irezumi emerge from the shadows.

The future of Japanese tattooing is hidden behind an unmarked apartment door just a ten-minute stroll away from Yokohama Station. The gaudy entertainment district is suddenly replaced by a drab residential area, not far from the waterfront, and it is here, above a skateboard shop, that we find Diablo Art, Aki’s tattoo studio. Part of the extended Bonten family of tattoo artists, Aki’s style ranges from traditional irezumi to black and grey portraits and geometric designs, but he’s especially famous for his otaku tattoos. Until a few years ago, the Yokohama-born artist played bass guitar in local hardcore band Days of Oblivion, but he has recently retired in order to concentrate on his artistic activity. This does not mean that he has given up on music though; when I step into his tiny apartment-turned-studio I find him enjoying some anime songs playing at full blast while he’s putting the final touches to a mangainspired tattoo.

It was aged 19, after finishing high school, that Aki began to seriously think about becoming a tattoo artist. “By this time I had already got a few tattoos myself, and of course I loved drawing more than ever, so I reached the conclusion that it would be cool to draw my own designs on other people’s skin. In a sense tattooing has just been a natural progression from drawing. “When I turned 20 I began to look around for a tattooist who would accept me as an apprentice. Eventually I heard about veteran tattoo artist Bonten II. I called him, arranged to meet him at his studio and he took me in. It was actually easier than I thought. He was very kind to me. He is very old school and rarely tells people what to do; you’re supposed to learn by just watching him work”.

Two years later, in 1998, Aki made his professional debut, working in his sensei’s studio in the Yokohama suburbs under the name of Hori-Ryushin. In 2004 he changed his name to Aki Bonten and finally opened his current studio in central Yokohama. He says that his approach to tattooing has changed somewhat in these 16 years. “In the beginning I didn’t have a clear idea about what I wanted to achieve with tattoos. What I mean to say is I was open to trying many different styles. It was only later I realized that what really attracted me about tattooing was the chance to practise my drawing skills and have people wear my art on their body. Even now I draw all the time, regardless of tattooing, and I keep studying in order to improve my technique”.

Together with his changed approach, Aki has seen a gradual but substantial change in his clients. “In the past I used to have many rough and ready types knocking at my door”, he says, “but they have been slowly replaced by regular guys and, in the last few years, quite a lot of foreigners. Then, of course, I seem to be very popular with otaku culture fans”. Aki began to make otaku tattoos (usually called otattoos) around 2006. “One day I uploaded on my blog an image I had drawn from the anime series Neon Genesis Evangelion”, he says. “Someone saw it and asked me to tattoo that image on his body. When we were finished he posted his tattoo on popular Internet forum 2channel, and it went viral. Since then I’ve had more and more requests for otatoos”.

“Even before then otaku iconography was popular with tattoo fans, but people in the trade said those images were too detailed to turn into tattoos. But when I got that first request I decided to give it a try and proved that it could be done, and with very good results. Now I tattoo otaku fans about once or twice a week”. Even though the average level of tattooing in Japan is very high and any professional tattooist can recreate an image on skin, Aki believes that it takes a real geek to create the perfect otattoo. “You have to understand that only someone who is familiar with manga and anime has an intimate knowledge of all the intricate details and personalities of those characters”, he says. “We’re talking about bishojo and bishonen (beautiful young girls and boys) and moe characters. Even for me it’s impossible to know them all. When a new client first comes to my studio we talk a lot about what exactly he or she wants me to do. I don’t like to start on a new tattoo if I don’t know the source material and the background story well enough, so if someone comes in with a drawing of a character I’ve never seen before, I’ll watch the series before doing any more work on the project”.

Even before becoming an otaku tattooist, Aki was convinced that the two subcultures were closer than many people thought. “In high school I was into a manga called Kinnikuman”, he says. Kinniku means “muscle” but the second character “niku” literally means “meat” and is tattooed on the protagonist’s forehead. There are other manga characters who sport tattoos, so in my mind I got the idea that the two art forms went well together”.

Even though some veteran tattooists don’t like the way irezumi have changed, Aki thinks that this new association with cute otaku iconography is a good thing for tattooing. “The main problem in Japan is that a lot of people think tattoos are dirty. They are also afraid of them because of their connection with criminals. But nobody can say that otaku tattoos are scary. On the contrary, they look cute and are non-threatening. I believe they have the power to silence all those people who are against tattoos”. When the interview is almost over I notice a bunch of flyers for the Save Tattooing in Japan campaign. We briefly talk about the problems the Japanese tattoo community has experienced in the last few years. “I think the only way to defuse this situation is to create a state-approved licensing system”, he says. “Only when tattooists are recognized as professionals with proven work and safety standards can we hope to be accepted by mainstream society”.