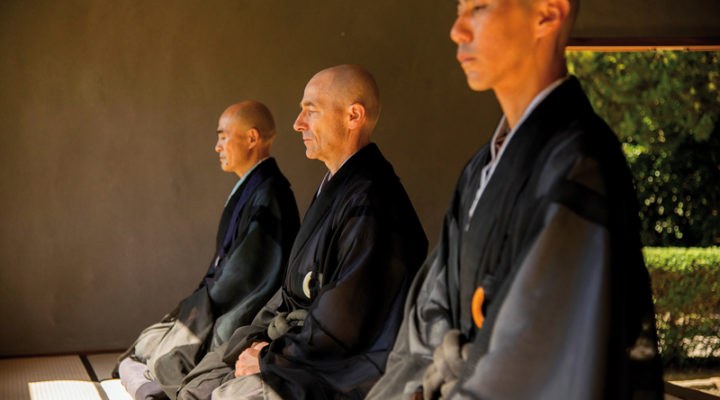 At first glance, sitting with a good posture to meditate looks difficult, but it’s actually quite easy. Just be careful not to doze off.

Nothing helps you recharge your batteries like a session of mindfulness meditation. Shinsho-ji is the ideal place to practise it.

In recent years, more and more people have found that meditation helps them in all sorts of ways, from focusing attention at work or school to recovering from trauma. Health authorities recognize it as an effective treatment for stress, depression, anxiety and even pain.

So it’s not surprising that an increasing number of visitors to Japan are seeking to discover the Zen roots of this kind of meditation. To cater for this demand, some Buddhist temples are opening their doors to the public, offering visitors a peek into their once-secret world. Eiheji in Fukui Prefecture, for instance, where Steve Jobs once found inspiration, is developing its facilities and building a billion-dollar hotel nearby, to attract high-end tourists. Shunko-in in Kyoto, where William Shatner (Captain Kirk of Star Trek) once beamed down, performs gay wedding ceremonies, but it also offers meditation practice, calling it ‘mindfulness’, the secular synonym popularized by Jon Kabat- Zinn to make meditation more appealing to western ears. Going one step further, Shinshoji Temple in the forest-clad hills outside Fukuyama in Hiroshima Prefecture, has rebranded itself as Shinsho-ji Zen Museum and Garden. Its aim? To make the world of Zen “fully accessible to the public for the first time ever, through all five senses”. The Zen experiences available to visitors at Shinshoji cover every aspect of a trainee monk’s life, including eating udon noodles served with five side dishes (a treat served to monks on shikunichi – days that end with four or nine), a tea ceremony, a traditional bathhouse for cleansing mind and body, vast grounds including a garden for contemplation and a museum of Zen art featuring a permanent collection of works by Hakuin. Hakuin was the 18th century monk who famously asked “what is the sound of one hand clapping?” – the best-known of all Zen koan (riddles), designed to break through a rational way of thinking to attain sudden and intuitive enlightenment. However, it’s the opportunity to practice authentic zazen, or seated meditation, that provides the ultimate taste of Zen. From the Shodo (Pine Hall) Temple Office and Information Centre, a guide leads you through the gorgeous Garden of the Appreciating Heart, where koi carp bask in a lake shaped like the Chinese character for “heart”, lined with maple trees on one side and cherry trees on the other. The graceful wooden arch of the Dragon’s Back Bridge takes you over the lake and up to the International Zen Training Hall, where a shaven-headed priest wearing robes of the ubiquitous “Hiroshige blue” awaits. He instructs you to remove your shoes and socks, put on the wooden sandals provided, then bow before and after entering the hall with your palms together in a gesture of gratitude. Inside the shadowy wooden hall are several low tatami-covered platforms. On each one thick futons have been folded in three, in such a way that the rear part is higher than the front. The priest then demonstrates how to clamber up backwards onto your futon and perch crosslegged on top. It all looks a bit daunting, but in fact the arrangement of the mattress not only makes it far more comfortable than you might imagine, it’s also surprisingly easy to sit withyour back completely straight. 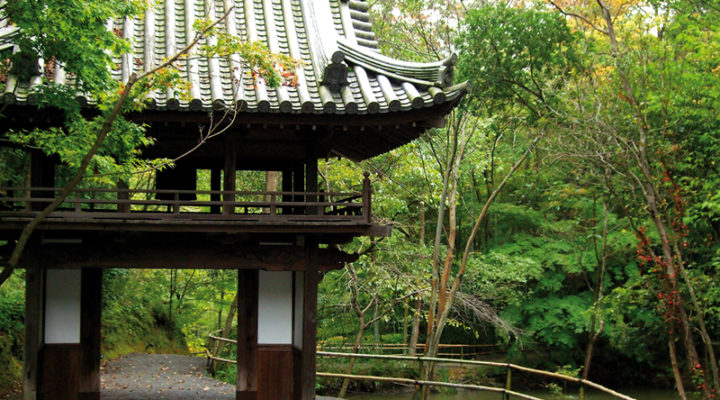 The door to the belfry invites you into the peaceful interior.

“Keep your eyes half open, to avoid falling asleep,” the priest instructs. “Fix your gaze at a point about 1.5 metres in front of you. If you feel yourself dozing off, and want me to wake you up with the keisaku, clasp your hands together and raise them in front of your chest”. The “keisaku” he alludes to is an intimidatingly big stick, flat like a paddle from a canoe. “Please don’t look on it as punishment,” he reassures you, “it is simply to help you focus”. With that, he lights a stick of incense, strikes a small handheld bell four times and we begin our meditation, concentrating on the breathing as instructed. Silence descends on the hall, broken only by the occasional birdsong in the trees outside. In this stillness, you become alert to a world of sensations: the mountain breeze blowing through the open windows, caressing your skin, the fragrance of the bare wood and incense and even the gentle purr of a far-off aeroplane. Through half-closed eyes you see the priest walking with sloth-like slowness, raising one foot, then waiting a couple of seconds before bringing it down and raising the other. His intimidating keisaku is always at the ready, but the first fifteen minutes pass without anyone feeling the need to request a wake-up call. Then, just as we begin to feel a bit fidgety, the priest strikes the bell and announces it’s time for a short break. “Change position if your legs are getting stiff,” he advises. Five minutes later he strikes the bell again to begin the second session, the sound resonating in the silence like ripples in a pond. This time, one brave young woman soon raises her hands in supplication. Through half-closed eyes we watch the priest shuffle slowly toward her. He comes to a halt in front of her, bows are exchanged and he holds his keisaku horizontally in front of her, as if presenting it for inspection. She bows deeply and he gently pushes her back down a little further, until it’s completely straight. Everyone has stopped meditating, unable to resist watching how the ritual will unfold. Thwack thwack! Thwack thwack! The priest delivers four hefty strokes to the woman’s back, two on either side of her backbone, and the other meditators audibly wince in sympathy. Yet far from putting them off, the rest of the group soon follow suit and put their hands up, eager to get their own taste of the keisaku awakening. No one leaves without trying it. Somehow the experience wouldn’t feel complete otherwise, like going to a hot spring resort and not soaking in the hot tub. Although it stings momentarily, the experience is actually quite invigorating, like a good massage. The second session continues for some twentyfive minutes, long enough for you to feel your mind emptying of all its usual chatter as you focus on the rise and fall of your chest with each breath. You begin to glimpse the total now-ness of the moment, uninterrupted by conscious thought. The bell sounds again, signalling the end of the session. The priest’s closing message is simple: “Every day, in the midst of your busy schedules, make sure you find a little time to devote to yourself. Even just for five minutes. Even just one minute. Find time for yourself”. With that, he slides the wooden shutters over the windows, you bow as you leave the hall, put your shoes back on and it’s all over. We float back out into the afternoon sunshine of the gardens in an elated state, feeling alive and alert. The priest is right. How often do you have the chance to sit in silence without checking your email or fretting about all the things you ought to be doing? Without even moving a muscle? By 2040, some 27,000 of Japan’s temples are expected to close, as the exodus to the big cities leaves rural temples with dwindling congregations. Hopefully initiatives such as Shinshoji’s will not only help keep more temples open, but also enable more people to experience the benefits of zazen.
PRACTICAL INFORMATION
To get there, just take the shinkansen from Hiroshima, osaka or Tokyo to Fukuyama railway station. Then catch the Tomotetsu bus to miroku no sato. The temple is about fifteen minutes away from the Tenjin Yama bus-stop.
Address: 91, Kamisanna, Numakuma-cho, Fukuyama-shi, Hiroshima-ken 720-0401
Tel: 084-988-1111