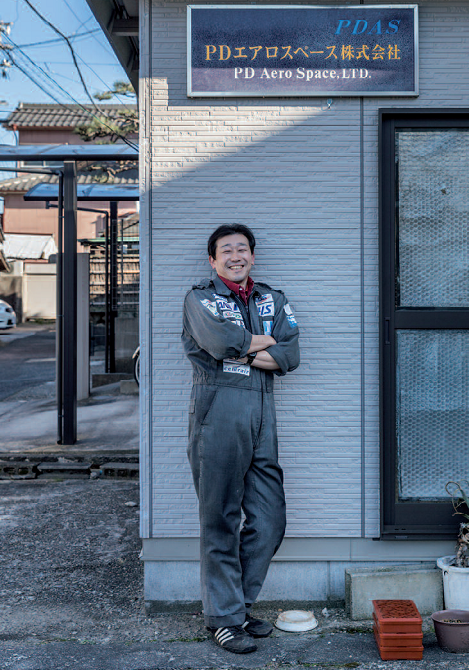 The CEO of PD Aerospace has never abandoned his childhood dreams.

Based in the suburbs of Nagoya, Ogawa Shuji dreams of making space travel available to all.
In Arimatsu, a district full of history in the suburbs of Nagoya, a display of dozens of Japanese dolls hung along the length of a wall catches one’s eye. It is an original decoration for the traditional celebration to welcome the arrival of spring on March the 3rd, and adds a bit of colour to this sleepy town. It is almost certain than nobody would expect to encounter a business whose ambition is to conquer outer space in this quiet suburb. Ogawa Shuji, born in this neighbourhood and founder of PD Aerospace, welcomes his guests with a large smile. At 46 years old, his appearance is similar to a TV presenter. His office and business HQ measures only 20 square metres, and his laboratory-comefactory is only sightly larger.
However, the apparently limited resources of his business don’t prevent him from thinking big. His ambition is to make tourism in space available to all, by halving cost of the materials involved. “If we succeed in reducing costs and making the journey from earth safer, we could exploit the immense potential of space,” he tells us. Last year, PD Aerospace brokered a financial agreement with HIS and ANA Holdings, two Japanese heavyweights in the areas of tourism and air travel. This is unheard of for a small business such as the one Ogawa created on his own in 2007. To understand the history of PD Aerospace, one must first look at Ogawa’s own life. When he was just a boy, he entertained himself by tinkering with engines and repairing and inventing toys with his father who was called the “neighbourhood Thomas Edison”. “We even experimented with reactors,” he remembers with a touch of pride. This is how he learned about aeronautics, and specifically the pulse engine, a type of reactor that looks like a long cylindrical pipe. Back then, Ogawa didn’t suspect that this reactor would become the key to the success of his future projects.
He was already dreaming about becoming a pilot or an astronaut “like all boys do”. He tried several times to join the Japanese Self-Defence Forces, but in vain. Far from abandoning his childhood dream, after his studies at Fukui University, Ogawa joined a team of engineers from Mitsubishi Heavy Industries, Japan’s flagship company and the engineers behind the famous Zero fighter jet. For four years he refined his knowledge of aeronautics in a part of the company that was developing fighter planes, but in 1999 he left to join the University of Tohoku in Sendai, where he worked on methods of space propulsion. He also studied to become an astronaut, but his hopes were dashed with the accident of the Columbia space shuttle in 2003. “They then stopped recruiting astronauts,” he tells us.
It was at the time when he was studying in Sendai that he came across the idea that would become the foundation stone of his future project: the similarity between a jet engine and a rocket engine in the second the fuel ignites. It’s a fact that one of the biggest problems with the rocket engine used in most space shuttles, whose structure resembles a pulse reactor, is the oxidizer used to ignite the flame in the combustion chamber. “It’s just too heavy, when we need it to be as light as possible to reduce costs,” Ogawa explains. He tells us how the weight of the shuttle is the key issue for every spacecraft engineer. For example, Virgin Galactic, an Anglo-American start-up, has designed a plane that takes the space shuttle up to 15,000 metres before its rocket engine ignites. This means the shuttle doesn’t need fuel for take off, but incurs maintenance costs for both the plane and the shuttle. The jet engine, unlike the rocket engine, uses air as an oxidizer, so Ogawa’s idea is to create an engine that combines the characteristics of both. “What if we replaced part of the oxidizer with air?, I asked myself”. This idea to create an engine with two means of propulsion, that uses both air and a separate oxidizer, had never been hit upon before and Ogawa patented it in 2012. A shuttle equipped in this way, with a pulse detonation engine (an engine similar to the pulse reactor but more powerful), will travel up to 15,000 metres before the oxidizer kicks in once the air is used up. For the return journey, the shuttle does the same but in reverse order. “To this day, Virgin Galactic estimates the cost of travelling into space at $250,000 per person. 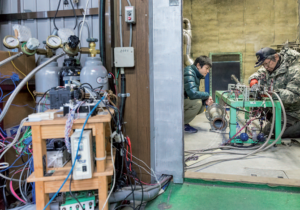 The success of his project largely depends on the development of a dual propulsion engine. 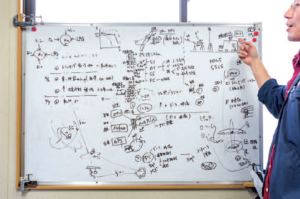 The former Mitsubishi engineer convinced travel giants HIS and ANA to invest in his project.

We think it’s possible to cut this cost by 45%,” he suggests.
Making space accessible to everyone is only the first step for Ogawa Shuji, who aims go much further. With his revolutionary engine, he wants to make it safe and easy for people to travel into space, and open up an era of commercial space travel. From setting up solar panels in space to creating a system for monitoring the weather, from the concept of a “space wedding” to the development of a high speed transport system using suborbital routes, the potential uses for Ogawa’s Shuji’s engine are limitless. This vision of the future is exciting, and led him to leave Mitsubishi to create PD Aerospace in 2007. “On TV, I saw an American start-up called Scaled Composites win the famous Ansari X Prize,” he recalls. “I had the ideas and the required expertise, and I told myself that I could do the same”. 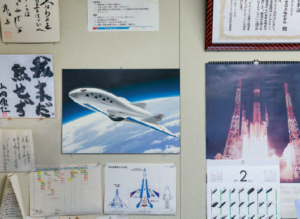 Ogawa’s goal is for a first flight test in 2020, in time for the Tokyo Olympic Games.

Yet setting up a company such as PD Aerospace in Japan, even with Ogawa’s experience and determination, was not an easy ride. Back then the start-up concept was hardly known in a country where the overwhelming majority of 22-year-olds were used to the idea of working in the same company until retirement. “I invited colleagues to join me, but no one dared. They preferred to lead a stable life-style,” he muses. That’s why he went back to his father’s “lab” where he used to have fun repairing toys thirtyodd years ago. Without any employees or the support of a large company, and with no money, Ogawa Shuji had to rely solely on his passion. “If I had complained about lacking this or that, it would have been impossible to create a space shuttle!” he jokes.
To solve the issue of finance, he travelled around the Japanese archipelago to meet investors, and tried to convince them of the huge potential of his project. In 2009 he entered a hackathon event and came second. That evening, after the competition, he approached Sawada Hideo, CEO of the tourism company HIS, who had voted for his project in the final round. With his usual outspokenness, Ogawa asked for financial help, and Sawada, who had also dreamt of becoming an astronaut when he was a child, agreed to give him that help. His project also caught the attention of the president of All Nippon Airways (ANA), Katanozaka Shinya, who visited his laboratory. “His lab was neither large nor well equipped,” the former joked during a press conference to publicize the collaboration between the three companies, “but I was impressed how passionate he was about his work”. 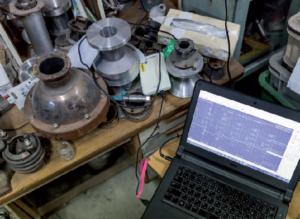 This partnership allowed him to raise the equivalent of around £357,000, a big step forward for Ogawa Shuji, who had been forced to postpone some of his project due to lack of investment. “With the support of both companies, finally, my project is making progress,” he says. “But it’s only the beginning. It’s still far from enough to implement my project fully”. Ten years after it was founded, PD Aerospace now has a team of forty people, including both paid staff and those who volunteered at the beginning when they were still unable to recruit. Despite progress with finances and human resources, it’s clear that Ogawa’s project is far from complete. “If there were a total of a hundred stages, I’d say we’re at the third stage,” he explains, frowning. Developing an engine with two propulsion systems, the key to the project, is only half finished. “We’ve already completed the rocket engine. Now we need to work on the pulse detonation engine and assemble them together,” he explains. Time is of the essence, as he wants a test flight to take place in October, and a space shuttle and crew in the air by 2020, the year of the Tokyo Olympic Games. “I need ten brains,” says Ogawa Shuji, a man who has never given up on his childhood dreams.
YAGISHITA YUTA