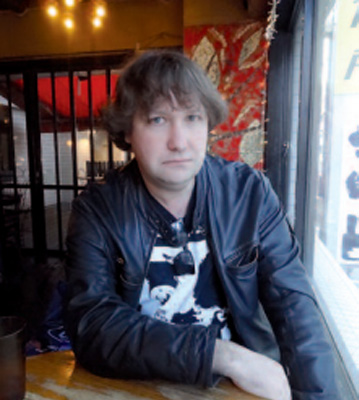 In one of Tokyo’s trendy districts,we met up with someone who’s an expert on the Japanese rock scene.

For English-speaking pop and rock music fans,it’s always been difficult to find reliable information on Japanese bands new and old. That’s especially true for books covering the indie and underground scenes. Luckily, a couple of excellent guides have been published recently that offer a frank and accurate look at the subject: Kato David Hopkins’ Dokkiri! Japanese Indies Music 1976 1989: A History and Guide,and the more recent Quit Your Band: Musical Notes from the Japanese Underground by Ian F. Martin. As I’m too lazy to travel all the way to Osaka, where Hopkins lives, Ihead instead toKoenji, inTokyo’s western suburbs, to meet Ian Martin. Koenji is one of the capital’s main centres of alternative youth culture and the go-to place to enjoy indie music of any kind. So it’s not by chance that Martin has chosen to base most of his work here.

Ian, you’ve lived in Japan for the past 15 years. what differences have you noticed between the Japanese and western music scenes?

Ian F. martin : It’s difficult to make any generalizations, but the local music industry tends to be more controlling. You can see it particularly in the case of the mainstream music scene. In the West, for example, the manager is someone who works for the artist, whereas in Japan the artists
are employed by at a lent agency (their manager is an employee of that agency)and are paid as alary. I guess in many case seven the artists feel comfortable with this situation because the iragency takes care of everything, and they feel they are well looked after. The problem is that changing agency can beareally big deal. There have been a number of cases where really famous acts (e.g. Ami Suzuki and Glay, who were two of the biggest selling stars ofthe‘90s)left their management company, were blacklisted from the music industry and found it difficult to keep working.

In your book you mention the “domestically dominated pop and rock music industry”. I’ve always been surprised by how insular the Japanese music market can be.

I.F. m. : The language is certainly a problem. But I think it also has to do with the local management system. If you want to have a hit in Japan, getting your video some airplay on MTV is not enough. You have to appear on variety shows and talk to some idiotic TV presenter, or get your song used in some TV commercial (a very common tie-up practice in Japan). This is your manager’s job, and foreign artists don’t have the kind of access and connections local talent agencies have. They also don’t have the time and energy required to deal with the Japanese market. But those who actually put in the time to do all these things, like Lady Gaga, have reaped the benefits.

You wrote that most indie bands end up quitting after a few years. Have you noticed a certain pattern?

I.F. m. : You have something you want to say and you say it. That’s how all these bands are born. After that, you need to have a very good reason to carry on because it’s not a talleasy,and the music scene gives you no reason at all. One of the things that makes the local music scene so interesting is that, basically, no one has a chance of becoming famous, so you just do what you want. There’s no pointin chasing some ghostly illusion of success — you’re never going to grasp hold of it, so you may as well do what you really like.That’s why so many people do such amazing things. The downside of it is that once you’ve made it, once you’ve produced a record, nobody cares about it. The same ten people are coming to your shows,and then gradually they get married or go on to do something different. Of course, this is a little bit of an oversimplification.

So almost everybody ends up quitting music.Is that why you called your book Quit Your Band?

I.F. m. :Yes, but I was also inspired by a song by Nakigao Twintail, a wacked-out, oddball punk girl band that I saw live almost by accident about four years ago. They were still in high school at the time. They came out on stage and played this insane, wild punk-rock set. In one song they sang,“I’m gonna quit!I’m gonna quit this band!” Then they stopped in the middle of the set, walked off stage, and when they came back they had turned into an idol group! And they said, “We’re going to do a song called ‘Suicide’.” I was like, what! And on top of that, their moms werethere – becausethey were just young kids at the time – standing with their faces in their hands thinking, oh god, what have we done!They split soon afterwards, but reformed about a couple of years ago after moving to Tokyo to go to university. So I grabbed them, threw them into a studio, and told them to record everything they had written so far.

Back to Call and response — apparently your first release was numbered 99, the second was 98, and you are planning to quit your label when you reach zero. what number have you reached so far?

I.F. m. : I must confess that I give a catalogue number to anything I produce, beita CD, cassette or zine. But anyway, my latest release was #62. And, of course, I’m definitely quitting when I reach zero. People have asked me what my defi-nition of success is regarding Call and Response. Well, my definition of success is that it’s going to end (laughs)! Unfortunately, I’ve miscalculated and set myself a very difficult goal. I guess it will take 20 more years until I finally reach zero.

Obviously there are many things in the indie music scene that annoy you, but is there one thing in particular that you really would like to change?

I.F. m. :If it were up to me, all gigs would cost 1,000 yen, and there would be no obligatory charge for drinks. 1,000 yen is areas on able amount of money to pay,and it would surely attract more people to the shows. The events would be more fun, with a wider cross-section of people. Of course, it’s very hard to make it financially viable, but it would attract a larger audience, because that’s what’s missing from the music scene right now: the audience. Or if we look at it another way, there are too many bands around. So,as the title of my books says, you should quit your band because your music is rubbish (laughs)!

No49 [Well-being] The zazen experience

No47 [Exclusive] First visit to the Hokusai museum