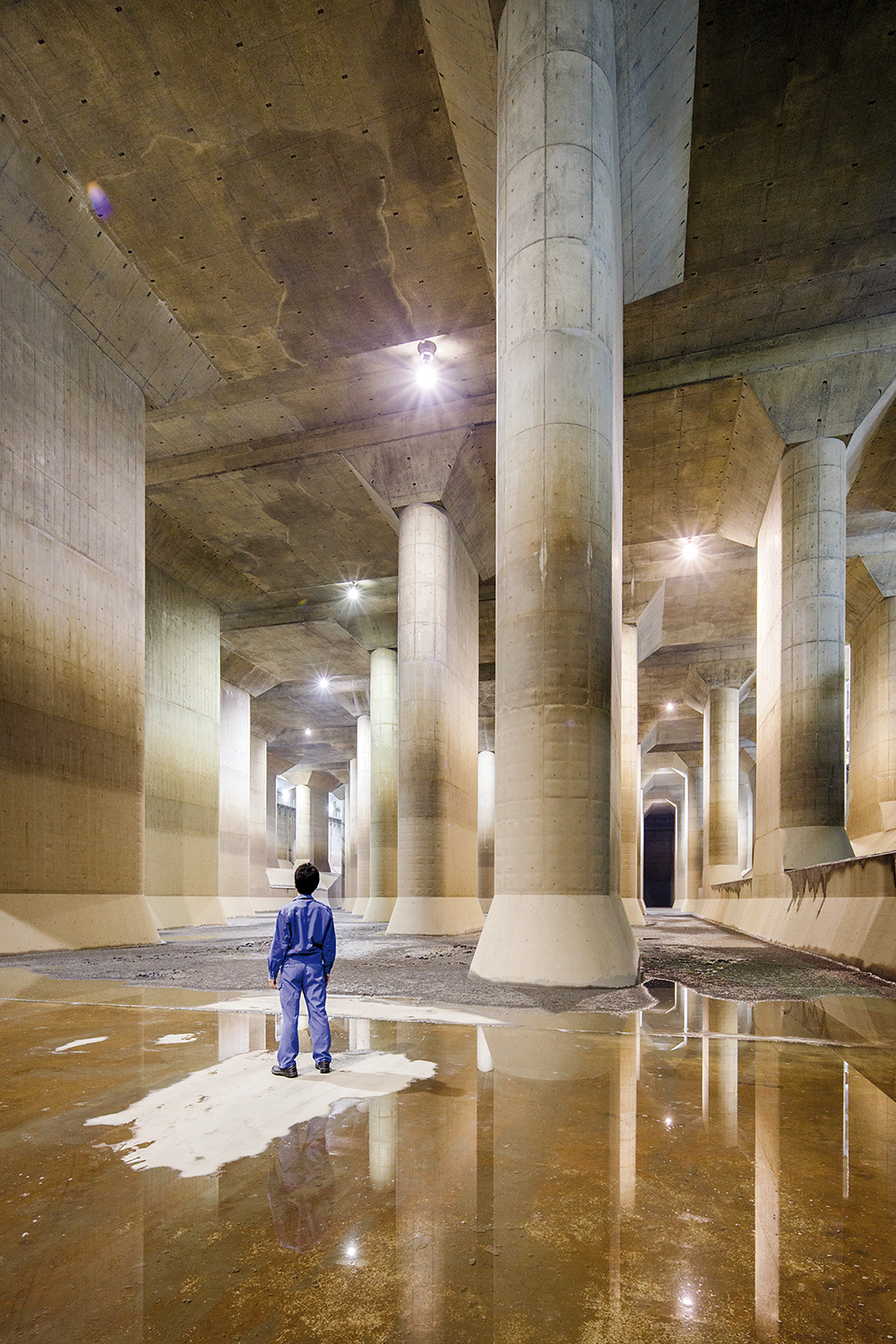 Built to prevent catastrophic flooding in the capital, the G-Cans Project can’t fail to impress.

What’s the use of a football field in the middle of nowhere? And why is there a concrete bunker on its sideline? This intriguingly surreal scene is completed by the strange guy who emerges from the bunker and walks towards us. He’s in blue overalls like the ones the former Apollo astronauts used to wear… We are in Kasukabe, a city north of Tokyo made famous by Crayon Shinchan, a kindergarten-aged manga character who is hugely popular among Japanese kids. However, we have not come here to celebrate Shinchan’s naughty adventures. The guy in blue overalls leads us into the bunker and down a flight of stairs. The danger signs hanging from the walls look quite ominous, but it’s too late to go back: our destination is awaiting us 22 metres below ground, just under the football field. It’s here that our apprehension turns into amazement when we finally stand in front of the “Underground Parthenon”.

Welcome to the G-Cans (short for Gesui Canal i.e. drainage channel), one of the architectural and technological wonders of the 21st century. As you can gather from its overlong official name (Metropolitan Area Outer Underground Discharge Channel), its purpose is to divert the massive amount of flood water during typhoons. What really sets it apart from similar places is its prodigious size. In fact, our futuristic Parthenon is a giant tank, 177 metres long and 78 metres wide. Part of this underground cave is taken up by 59 massive concrete pillars (from where the similarity to Parthenon stems), each one 18 metres tall and weighing 500 tons. A sign fixed to the pillars four metres from the ground marks the water level above which the turbine pumps spring into action. While this tank is in itself something that must be seen to be believed, it’s actually only a part (the most famous one) of a much bigger project – the world’s biggest underground drainage system.

Contrary to what is often reported in the foreign press, the G Cans is not located in Tokyo but in Saitama prefecture. However, it plays an important role in ensuring public safety in the capital city.

According to a Central Disaster Management Council survey, if the G-Cans were not in place to protect the metropolitan area from natural calamities, when the Arakawa (one of Tokyo’s main rivers) overflows as many as 97 underground stations would be flooded.

As FUKAGAWA-san (the men in blue overalls) explain, several rivers cross the Kanto plain (that extends across Tokyo and its surrounding prefectures) and flow into the Pacific Ocean or directly into Tokyo Bay. Four rivers in particular are channelled into the tank located to the north of Tokyo, and two of them – the Ayase and the Naka – flow across Saitama prefecture.

Because of the lie of the land, rain water has a tendency to accumulate in this area, and the many typhoons that cross Japan between the end of August and the beginning of October cause these rivers to overflow. 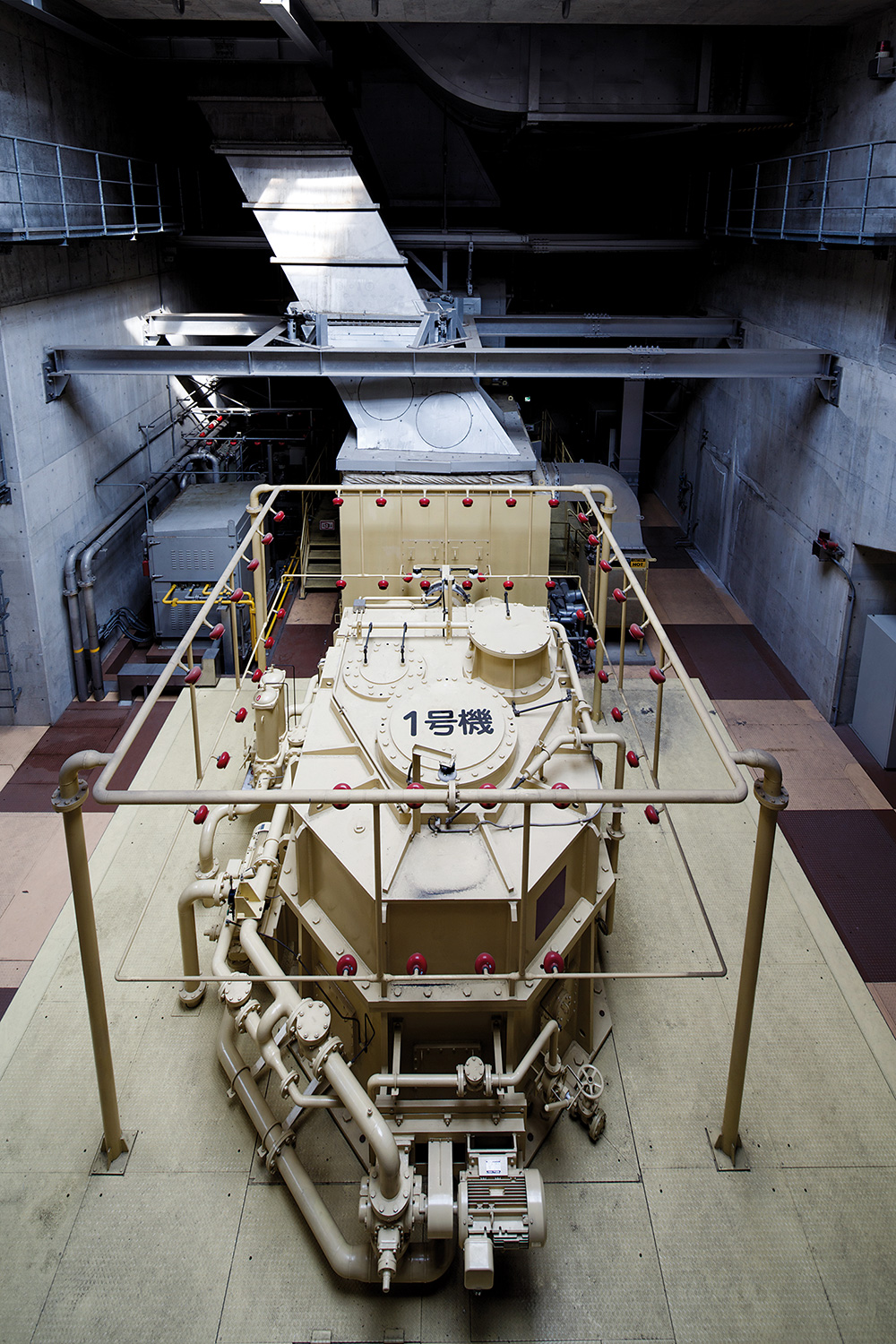 One of the 14,000-horse-power pumps used to drain the water into the Edogawa River.

In the postwar period alone, this region has experienced no fewer than seven disastrous floods that have destroyed up to 41,000 homes. This phenomenon was further exacerbated in the second half of the last century by the uncontrolled urban development that has turned this traditional rural area into a gigantic residential suburb. For instance, while in 1955 forests and cultivated areas still covered 85% of the region, thus absorbing some of the rain water, they have been gradually replaced by roads and buildings. By 2005, almost 60% of the region had become a residential area. In such conditions, the outdated drainage system could do little against typhoons that, on average, can deliver as much as 150-200 millimetres of water in 48 hours. According to the Ministry of Land, Infrastructure, Transport and Tourism, for instance, a particularly disastrous flood in 1991 affected an area 24,710 acres wide and dam- aged more than 30,000 houses.

Two years after the disaster, the government de- cided to solve this recurring problem by building a huge channel that flows 50 metres underground. The 6.3 km-long channel intersects the region’s major rivers at five different points. At each of these intersections they have dug an enormous 65-metre-deep concrete containment silo big enough to contain a space shuttle or the Statue of Liberty. Seen at close range, these silos somewhat resemble a launch pad for nuclear missiles from a James Bond movie. As a matter of fact, they play a fundamental role in keeping the region disaster-free as they have a maximum capacity of 670,000 cubic metres.

All the water collected in these silos is then pushed eastwards by four 14,000-horsepower pumps until it flows into the Edo, one of the re- gion’s biggest rivers and the natural border between Tokyo and Chiba prefecture. The pump- ing station is the heart of the whole system as it also houses the control room where all the operations are monitored. 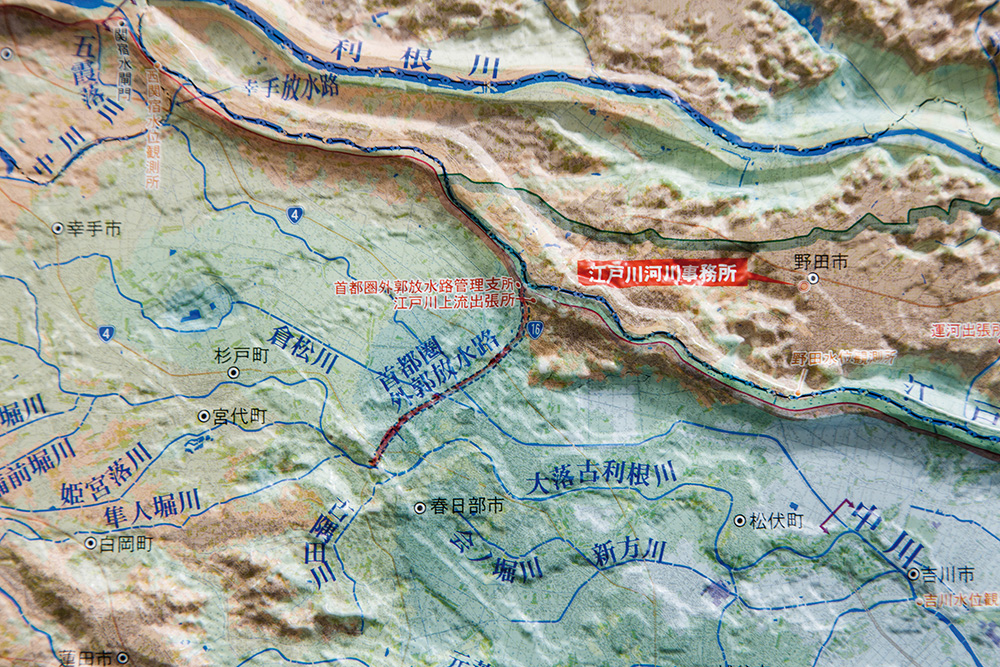 The impressive network of rivers and streams surrounding Tokyo can be seen on this relief map.

It took 17 years and 238 billion yen to complete the project, but it was worth the effort. It has been estimated that the G-Cans has reduced the risk of floods by 80%. A few years ago, for instance, another big typhoon passed through the Kanto region, and rain fell to a depth of 200 mm in the area north of Tokyo, yet only 14 houses were damaged.

Incredibly enough, visits to the underground Parthenon are free. You just need to apply by visiting their website. Alas, not only all the information on the website but even the application form and the visit are in Japanese, but the place is well worth the effort. With luck, you will find someone there who can help you translate. Inside, it looks like an SF film set. Indeed, this place has already been used to shoot several Japanese superhero films (and a Land Rover TV commercial in 2006). The tour starts with a visit to the information centre where numerous maps, photos and dioramas are on display. After watching a video, a guide leads you to the control room. Next comes the Parthenon, and no matter how many photos you have seen beforehand the actual sight will take your breath away. Just be warned that only part of this area is open to the public, and the whole place can be closed at any moment without warning.

The best way to reach the G-Cans is by train: from Shinjuku station it takes about one hour. Take the Saikyo Line towards Kawagoe. When you reach Omiya, change to the Tobu Urban Park Line. Get off at Minami Sakurai, and from there you can either walk the last 3 kilometers or take a taxi.