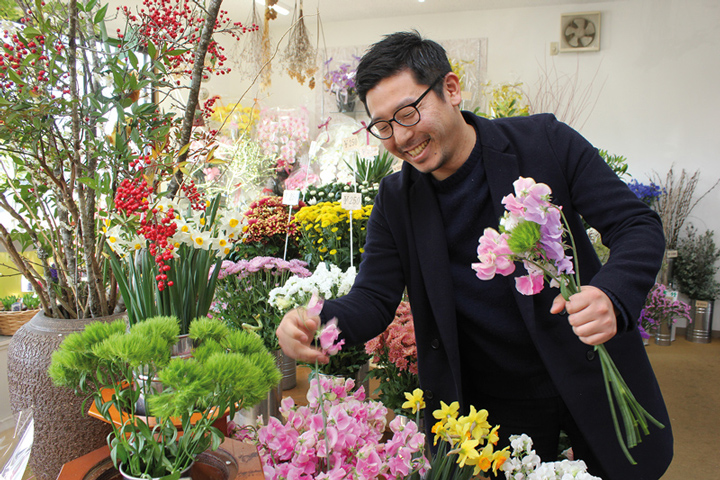 Oka Yasufumi uses flowers to bring colour back to the region.

Since the disastrous earthquake of 11 March 2011, the region of Ishinomaki has become a shadow of its former self. Though food, clothing and shelter are indispensable for survival, everyone is aware of the importance of other vital elements necessary to ensure peace of mind. Originally from the Inai district of Ishinomaki, Oka Yasufumi returned to work in the family flower shop in Hanaki after the disaster. He had never imagined “taking up this work again”, but it has now become his full-time occupation. Through his work he has brought colour back to this region.

In his youth, he always kept quiet about his parents’ job as florists. “Flowers are a girl’s thing, I was ashamed…,” he remembers. This same feeling of shame is what pushed him into enrolling in a secondary school for vocational training in Ishonomaki, but during his final year, he had to face up to reality. He thought long and hard, and decided to follow in his parents’ footsteps. “The shop would have had to close down if I hadn’t taken over,” he remembers. “So I agreed to work in the flower shop, but on condition that I was the manager”. He signed up to study economics and business administration at Tohoku Gakuin University. After graduating, he wanted “to leave Ishinomaki, as the family shop felt too much like a quick-fix solution”. So he got a job with a florist in Tokyo specialise in weddings. After working there for six years, he gave in his notice in February 2011, and went to work with another florist. But on returning to Ishinomaki after the March earthquake, he found the family shop completely flooded. That’s when he decided he would move back once it had been restored.

“I was in Tokyo when the earthquake struck. I couldn’t imagine what the people in the region had to endure, and I found it impossible to talk about the earthquake,” he says, attempting to describe the way he felt at the time. But something changed in him: he was taking part in the “Ishinomaki Reconstruction Project” set up by people from Ishinomaki living in Tokyo, and at the same time following the day to day events in Ishinomaki. “You can’t travel back in time.

I’ll never really know what happened. But by returning to Ishonomaki, I could at least find out how the reconstruction was progressing”. In July 2012, Oka Yasufumi returned to the family shop. For the past four years, in addition to his occupation as a florist, he’s taken part in many regional activities: organising musical events, setting up an art association called “Makithing”, and participating in the “Wedding in Ishinomaki” project, whose young members organise weddings. As for his work as a florist, he says that “flowers create a link between the person who gives them and the person who receives them. You can lead a life without flowers, but life seems richer when full of flowers. During happy or sad times, flowers are always part of your life.”

Currently, he works as the “florist he didn’t wish to become!” But, for him, what matters most is to adapt to his situation, rather than complain about it. “Our generation’s responsibility is to show younger people what Ishinomaki has to offer,” he says. One by one, he wants to reveal all those opportunities… guided by the dream of rebuilding the region of his birth.