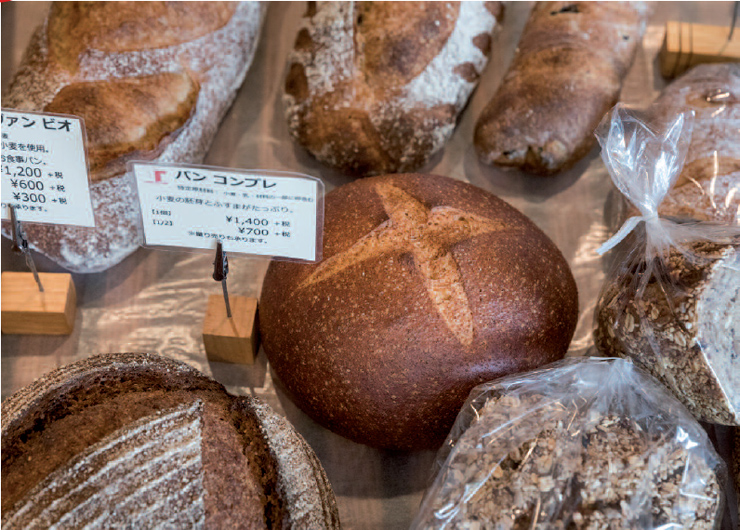 Some of the speciality bread made and sold at the Signifiant Signifié bakery in Tokyo.

It has become one of Japan’s favourite foods since the end of the Second World War.

T his morning, Mayumi will eat bread and jam for breakfast. “It’s more practical and less complicated than making rice,” she explains. “If I eat bread, all I need to do is get the butter and the jam out of the fridge. If I were to start making rice, I would need to prepare it, wash it, cook it, etc. Then I would have to think of what to eat with it: meat? fish? vegetables?” Choosing to eat bread represents a considerable gain in time when getting ready for work in the morning. If she’d wanted to eat a Japanese breakfast, she’d eat rice, vegetables, fish or meat, a miso soup, and she’d have needed to get up early. She is an active and dynamic 30-year-old, and she still loves the traditional morning meal, but now she keeps it for her days off, or when she’s spending time with her family: “when I go home to see my parents for example. Generally, when I visit my family, we eat a lot more rice than I usually do.”

But today, like every other morning, she will make do with toast. “I love the taste of bread! I also often eat it for lunch. I like baguettes as well as rye bread, which I tried in France, but they are difficult to find in Tokyo. I also like shokupan, which Japanese sliced white bread that I toast. I like the different kinds of shokupan, such as those with walnuts and raisins.” Mayumi is far from being the only Japanese person to have chosen to eat bread. Several months ago, a programme on Nippon TV interviewed young people in Tokyo on their way to work, to find out what they had eaten for breakfast. Most of them said they had toast and something to drink. Sometimes the answer was cereals, yogurt or fruit. Others, when they needed to get to the office early, would use the kombini solution, a supermarket that’s open 24/7, and sells a large range of bread, drinks and yogurts for breakfast on the run. Almost none of those interviewed in the Japanese capital said they had had rice on that day.

With the idea that “Understanding dietary behaviour allows one to study the links between generations”, the Norinchukin Bank, the main financial partner working with the agricultural, fish farming and forestry cooperatives, regularly studies Japanese eating habits. Since 2004, it has delivered a yearly study on the eating habits of high school students. The survey is of 400 high school students living in the capital, and it usually asks questions such as “Do you eat more rice or more bread?” “How frequently, at what time of day, and in what quantities?” In 2006, nearly 70% said they ate bread for breakfast. That was a slap in the face for the traditional Japanese breakfast, which requires more preparation time for parents and the working population.

The origins of the rise in bread consumption go back to the 1950s. “After the Second World War, famine hit Japan, there wasn’t sufficient rice to feed the local population,” the head of the professional journal Pan News, Yaguchi Kazuo, explains. “Wheat flour was then imported from the United States, and that’s where the great increase in bread consumption stems from. It’s also one of the reasons why Japanese people who are now over 60 still enjoy their bread to this day: they ate a lot of it for lunch in the school canteen when they were young.” Nevertheless, rice seems to be making a comeback. “There’s been a real attempt to gradually reintroduce rice into the meals of the younger generation,” he adds. “Especially in school canteens, where bread is now only served once a week; the rest of the time, the pupils eat rice.”

This is corroborated by Norinchûkin Bank’s data: 90% of pupils still eat rice for lunch, generally in the form of a bento prepared by their parents (91.8%), but which is sometimes bought off the school premises, or even served in the canteen. Nevertheless, 55% of the pupils in secondary school also say they want to keep a watch on their weight. This is a point in favour of bread, which is seen to contain fewer calories, an argument also used in marketing advertising. For this reason, out of the 200 female high school pupils who were interviewed in Tokyo, 73.5% of them said they ate bread for breakfast, as well as expressing concern about their weight (82.5%, compared to 27.5% of the boys). This is a trend that barely existed 11 years ago. Out of the 27.3% pupils who buy their breakfast at kombini, 51.5% of the girls consume the greatest amount of bread and sandwiches. 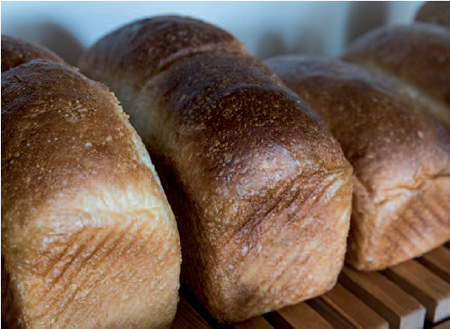 White sliced bread is a very popular part of the Japanese diet.

Though the consumption of bread has made a considerable breakthrough in Japan since the Second World War, the history of its arrival in the archipelago is much older. Bread is said to have made its first timid appearance in Japan in the 1540s, when missionaries brought some over from Europe by boat. Documents are said to exist in which the feudal lord and military general Oda Nobunaga describes the taste of the bread that he was given by the missionaries. During the period of sakoku, when Japan isolated itself from the rest of the world, bread practically disappeared. It wasn’t until the end of the 19th century that Japan started to produce its own bread for the first time, under the impulse of the politician Egawa Hidetatsu, who considered it to be the most practical food for soldiers on ships as they wouldn’t be discovered by the steam created by cooking rice.

In 1875, Kimuraya Bakery, the most famous Japanese bakery, put bread on the map by making the very first anpan, which are sweet rolls stuffed with red bean paste and were much enjoyed by the Emperor. In 1888, Sekiguchi Furansu-Pan introduced authentic French baguettes to the archipelago. He then created his own varieties, such as the matcha baguette, a black sesame baguette with cream, and more than a hundred other kinds. After anpan, jamupan (jam filled rolls), started appearing, as well as kurimu-pan (cream filled buns) and melon-pan (sweet buns). On the savoury side there were kara-pan (curry rolls) and katsu-sando (breaded pork sandwich). Little by little, bread conquered households before reaching unprecedented popularity. In a column focusing on the modern history of bread, published in the English speaking Japan Times, journalist Shoji Kaori explains the way “bread became a treasured moment of comfort for her mother, like many women in Japan. It was a guilty pleasure, eaten while sitting on the couch, with a cup of tea, once the whole family had left for work, and she had finished serving the tiresome full-Japanese breakfast demanded by her brothers and father.” After the Second World War, bread was definitively included in the Japanese diet. But “for many, bread remained a symbol of the American occupation,” the journalist adds. “It was a poor substitute for white rice. The bread served in Japanese canteens during the American occupation was tasteless. It wasn’t until the end of the 1970s that Japan started to produce its own bread. It took another twenty years for the country to give it its own unique taste.”

Nowadays, the archipelago has thousands of bakeries. Shokumpan, the soft and thick-sliced white bread that can be found everywhere across the country, accounts for 70% of Japan’s bread consumption. It’s delicious and cheap, eaten fresh or toasted, and can be bought in bakeries as well as supermarkets and kombini. For some years now, shops entirely dedicated to artisan shokupan have been opening across the capital. Since 2013, when 7eleven’s Kin no shokupan was launched, this “premium” bread has flown off the shelves. All the wholesalers, such as Yamazaki Pan, which represents 20% of the bread market, have launched their own ranges to satisfy customers who are ready to spend more to get the best product made from quality ingredients.

“The Japanese like bread, but they like it very soft and fluffy,” says Kozaki Yoshimaru, the president of the Japanese Gastronomic Institute. Shokupan’s soft texture reminds them of rice, as well as traditional Japanese pastries. It’s harder to sell crusty bread in Japan. There’s a lot of work to do to educate Japanese palates if we want to encourage them to enjoy products other than their traditional bread.” Unfortunately for the French baguette, which is well represented by brands such as Viron, Joël Robuchon and Maison Kayser in Tokyo, “despite its prestige and quality, today, it still suffers from its reputation of being too hard and difficult to eat,” concludes Kozaki Yoshimaru.

No57 [CULTURE] Singing for a better life

No56 [GUIDE] Nine places to avoid… or not

No61 [AMBITION] Resolved to do it her way