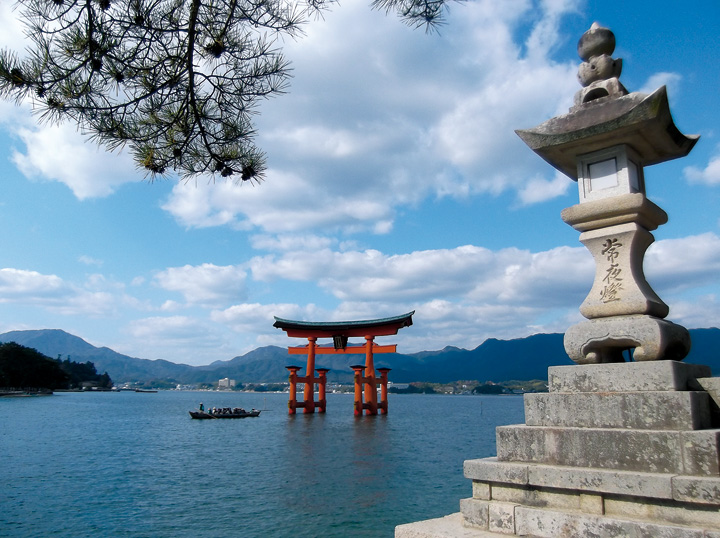 The miyajima torii is as celebrated as mount Fuji around the world. / Angeles Marin Cabello for Zoom Japan

Known for its floating shrine and its torii rising out of the water, the island is also a gourmet’s paradise.

Everyone loves Miyajima. It’s a World Heritage Site, one of Japan’s Top Three Beautiful Views and a sacred island where the gods are still said to dwell. All just a ten-minute ferry ride from Hiroshima. Miyajima’s huge red torii gate rising out of the sea and the ‘floating’ shrine of Itsukushima are as much Japanese icons as Mount Fuji itself. Yet for the local people of Hiroshima, it’s the island’s unique foods that keep them coming back.

“Miyajima has four attractions”, says university student Maiko Takemura. “The torii, the shrine, the view from Mount Misen, and the food!” “I love the views of Miyajima, but I love the food better!” says her friend, Ayumi Otawa, echoing the feelings of many locals.

Fortunately, as the island only has a handful of streets (the rest is all temples, shrines and primeval forest) you don’t have to look far to turn your trip into an unforgettable culinary experience. And don’t worry if you don’t know your kakidon from your yakisoba. This being Japan, the restaurants all have window displays featuring realistic reproductions of the dishes they serve. Arriving around 9.30 am, before the bulk of daytripping hoards emerge, the first thing you’ll notice as you step outside the ferry terminal buildings into the warm morning sunshine is the deer. “How cute!” you think. “Tame deer lounging around the streets”. But beware. Just as you’re fumbling for your phone to snap a quick selfie with them, they’ll spring into life and make off with your ice cream, sandwich, lunch bag, hat or whatever else they can grab.

They are believed to be messengers from the gods, so they roam the streets unhindered and get away with robbery.

On the short walk from the ferry to Itsukushima Shrine, instead of following the seafront path, make a detour along Omotesando, the main shopping street. It’s crammed with back-to-back restaurants and souvenir shops on both sides. At this time of day, the street echoes to the clanging sound of metal blinds being rolled up as the stores open for another day.

You can’t help noticing the smell of oysters on the breeze. Oysters are Miyajima’s prime delicacy. Hiroshima accounts for 70% of Japan’s total production. You’ll have seen scores of oyster beds on the ferry ride over. They’re dotted all around Hiroshima Bay, like wooden rafts, from which the oysters are suspended. 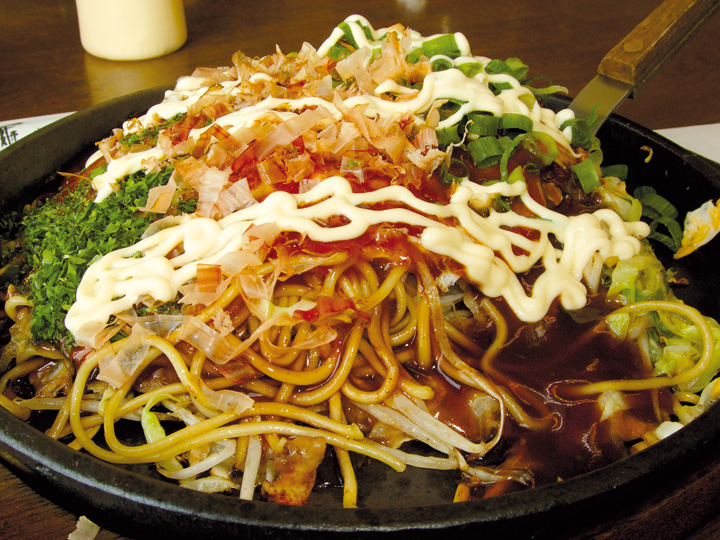 Oysters are known here as sea milk, because of their high nutritional content. You’ll find them in rice dishes, noodles, stews, or simply grilled right there in the shop front, which is why the air along Omotesando is always filled with the smoky sea-scented tang of oysters.

If oysters are not for you, then try nibbling a nigirinbo – hollow circular sticks of fish paste brimming with bacon, cheese, asparagus and other scrumptious fillings. They’re available to take away at many stores along the street.

For something more substantial, there’s the other local speciality: anago, or conger eel. As with oysters, anago are prepared in multiple ways. The most typical dish is anago meshi – conger eel served on a bed of rice. But Tachibana restaurant, near where Omotesando starts, also serves anago udon – substituting rice for thick udon noodles. Make yourself comfortable on the tatami floor and tuck into a steaming bowl of noodles topped with generous chunks of tender eel, with pink and white slices of chikuwa fish paste, wakame and a raw egg swirling round in yellow threads. It’s a scrumptious, hearty dish, far more substantial than its more famous rice-based counterpart. Another fun option is Yasokoi, a first-floor restaurant along the seafront path parallel to Omotesando. Here, not only can you sit by the window and enjoy sublime views of the bay, you can also treat yourself to anago okonomiyaki – a fusion of Miyajima’s conger eel specialty and okonomiyaki, the wondrous pancake topped with a mountain of cabbage, squid, bean sprouts, pork and egg – Hiroshima’s signature dish.

Now you’re nicely set up for a strenuous day’s sightseeing.

But first, for dessert, you can’t leave Miyajima without trying the island’s most emblematic treat: momiji manju – soft cakes in the shape of a maple leaf and stuffed with a variety of fillings. Just a few years ago, the only filling available was azuki bean paste. Nowadays, you can choose from cream, custard, green tea, cheese, chestnut puree, chocolate, lemon and more.

And even more recently, deep-fried momiji manju (agemomiji) have become increasingly popular. “They’re crispy on the outside and soft inside”, enthuses Maiko.

Manju are Miyajima’s favourite souvenir, so Omotesando is full of shops selling them in beautiful ornate gift boxes. In some shops, like Daikon- ya, you can watch them being made on fullyautomated conveyor belts. It’s quite hypnotic. And at the rear of Daikon-ya, you’ll find one of Miyajima’s best-kept secrets: a tiny traditional Japanese garden complete with bonsai, koi pond, stone lanterns, and even a waterfall.

There, you can munch your manju and contemplate the owner Kenzo Arimoto’s prize-winning koi (“Worth around a million yen each”, Arimoto- san says with pride).

He also explains that momiji manju originated back in the Meiji period (1868-1912), when Ito Hirobumi (four-time prime minister of Japan) was drinking tea in a Miyajima teahouse. On seeing the delicate hands of the waitress he is said to have exclaimed, “What a beautiful hand! It’s just like a maple leaf!” The remark inspired the teahouse owner to start making maple-leafed shaped manju, and they’ve been Miyajima’s most famous souvenir ever since.

For something more hands on, head for Yamadaya manju. Here, if you book ahead, you’ll get taken upstairs to a small kitchen where you can make your very own manju. Under the chef’s expert guidance, it’s much easier than you’d think – there’s even a machine that wraps them for you when you’ve finished. What better souvenir to take home with you?

By now it’s lunchtime, and the street is beginning to get very crowded with groups of tourists from all over the world led by flag-waving guides, and parties of elementary school children walking two-by-two and wearing their bright yellow hats. You may well get stopped by high school girls wanting to interview you. It’s an assignment for their English class, so spare them a few minutes and have a laugh with them.

Peak hour at Omotesando is a good time to go off and do your sightseeing at the shrine, or ride the ropeway to the top of mystical Mount Misen to be filled with awe while savouring the view over the labyrinth of misty islands. Alternatively, just lose yourself in the shady cool of Momiji Dani maple forest park, listening to the chattering of the stream and the whispering of the wind in the trees.

As bustling as Omotesando is by day, by 18:00, stores begin to close, the street quickly empties and by 18:30 it’s largely deserted. If you’re hungry again after all your sightseeing, one of the few places left open is the charming Mametanuki bar, open from 17:00 till 23:00. Unusually for Japan, it even has a little terrace out front, so you can sit outside and savour the evening. Mametanuki lies at the rear of one of Miyajima’ oldest ryokan, Kinsuikan, founded in 1912, which also has a historic spa.

Mametanuki also offers you your final chance to sample anago meshi before leaving the island. They bring it to you in a delightful little wooden box along with side dishes of pickles, miso soup (with local asari clams) and hijiki seaweed salad. By the time you head back to the ferry terminal, the sun is going down and you’re just in time for one last moment of Miyajima magic: the lighting of the stone lanterns that line the seafront path to the shrine. It’s worth staying just to watch them cast their ethereal glow over the water. As you board the ferry, you cast a last look back at the torii and the darkening peak of Mount Misen. You feel a deep contentment because, just for one day, you’ve dwelt with the gods and dined like royalty.