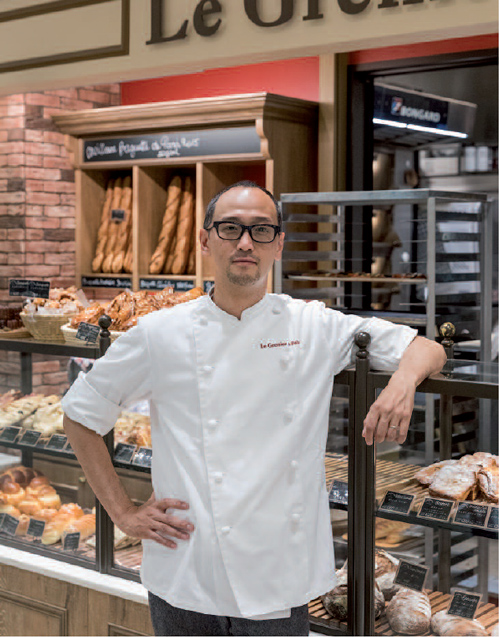 Aware of the need to educate Japanese’ taste buds, Kozaki Yoshimaru has taken on the role of teacher.

The Japanese prefer soft-textured textured bread. How can they be encouraged to turn to more crusty breads?
K. Y. :
By informing them and encouraging them to try new tastes. In most Japanese bakeries, such as Vie de France, you pick up a tray. You see the bread you want to eat on the shelves, help yourself, and go to the cash desk. You pay and then you leave. There’s no communication throughout this transaction. We can’t apply this same system here. Firstly, people would find it difficult to choose. We have a large selection of different bread including those that are cereal-based, which is quite rare in Tokyo. Most Japanese don’t know rye bread or wholemeal bread, so it’s important to explain the different types to make them want to try. We explain how a baguette is eaten, and have jams on offer so that people can have jam on toast at home for breakfast. It’s necessary to take your time and the sales assistants take care of every customer. I believe that this time devoted to giving advice is fundamental.

What other difficulties have you encountered?
K. Y. :
In parallel with this major need to educate palates, there’s also the need access the raw materials for making bread. Bread is a mix of flour, water, yeast and salt — that’s all. It’s easy, but if you want it to be good, you need the knowhow and basic ingredients of high quality. That’s why we use La Tradition French flour from Minoteries Viron. The use of this flour is rare in Japan, and it costs three time more than American or Canadian flour, which are generally used by most Japanese bakers. Another detail is the water. In France, you can easily use tap water for bread as it’s sufficiently hard for that purpose. Here, it isn’t suitable for bread making: we buy bottled French mineral water (Contrex). So it costs much more to produce, which in turn affects the sale price, and this discourages some consumers. But it’s the price one has to pay for the best artisanal bread. Japanese craft-bakers who choose to make French bread usually encounter many difficulties, especially when setting up. They train in France, return to Japan and have no idea of the number of obstacles they’ll encounter when starting up.

You decided not to sell shokupan or other kinds of Japanese bread.
K. Y. :
No, we sell exactly the same products as are sold in the 29 Grenier à Pain bakeries in France. That’s also what we promote in the shop, all that’s typically French: instead of shokupan, we offer our own white bread, and it sells well. The Japanese like to try foreign products. Personally, I love shokupan and other Japanese breads, but it’s not what I am after in this shop, that’s not my approach. In Chez Lui cafés, which I also manage, we focus more on Japanese people being served in an old-style French café. It’s a completely different kind of shop selling totally different products.