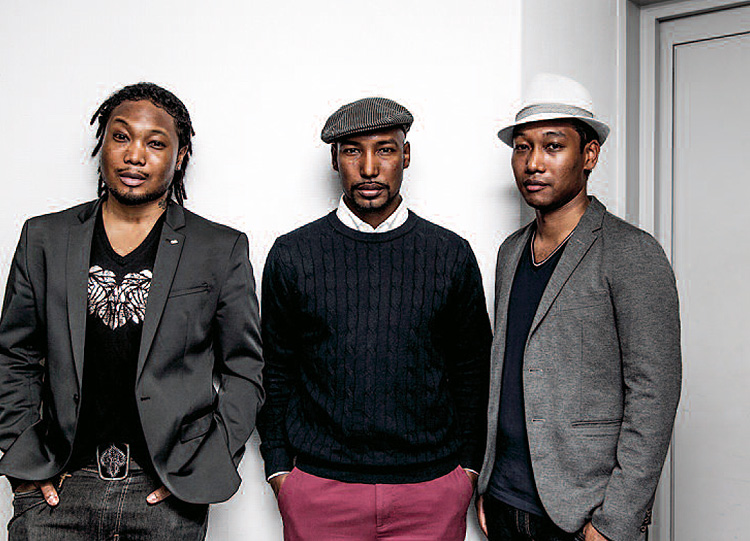 Michael, David and Sanshiro Yano had a tough time before they became well-known.

The Yano Brothers have known both highs and lows since their arrival in the archipelago.

with his slanting eyes and dreadlocks, Michael Yano makes his entrance singing “I’m an African in Japan”, his personalised version of Sting’s “I’m an Englishman in New York”. “That’s the theme of your report, isn’t it?” he laughs. In this cafe in Shinjuku, the skyscraper district of Tokyo, his very dark skin and relaxed manner contrast with the other Japanese customers. This is quite normal, as Michael’s father was Japanese and his mother Ghanaian, known as an “ovni” (alien) in Japan. Aged 38, he’s the eldest of three brothers born in Ghana, who all look alike, but each with his own different style. Sanshiro, 33, looks more Asian but has an afro hairstyle, while David, 36, with his moustache and his carefully trimmed goatee, could come from India or Yemen.

All three of them formed the Yano Brothers, a trio who sing about love and unity, but also about discrimination. They had a long and hard journey before they were able to express themselves through their Afro-Japanese roots, an identity they call ‘Jafrican’. “We’ve always been treated differently, even when we were in Ghana”, Michael recalls. The unusual family story began in 1975, when Yano Mitsuaki, a 35-year-old Japanese architect, was sent to Accra to build the Noguchi Hideyo Research Centre, named after the eminent Japanese bacteriologist who discovered the syphilis pathogen.

Noguchi, whose image is on the 1,000 yen note, died of yellow fever in 1928, in Ghana, then known as the Gold Coast. This first visit to Africa changed Mr Yano’s life. “One evening, my father agreed to accompany a colleague who had a date with a Ghanaian. She arrived with a friend, a dancer, and my father fell in love with her. She became our mother”, says David. He’s returned numerous times to Ghana since then, and says it’s still quite rare to see expatriate Japanese dating Africans. “Many are afraid of catching diseases. Unfortunately, this negative image of Africa persists”, he says. Only Michael has some childhood memories of Accra. “I remember my mother inviting people to our house to do traditional dancing. When she danced with other men, my father always pulled a funny face!” His brothers look at him reproachfully. Michael is the most voluble in the family, and it’s he who writes the songs influenced by hip-hop. “All I remember is reading manga by candlelight!” says David. “He has the worst eyesight of us all!” his brothers laugh. In Accra, their parents started to raise chickens and opened a kebab restaurant. “Our father resigned from his job to set up on his own. He wanted to spend more time with us”, explains Michael. The restaurant attracted lots of expats who enjoyed the good food, the easy-going atmosphere and the live music provided by local groups at the week-end. But one night, the family was burgled by around 30 armed men who targeted the district where the expats lived. By the time they arrived, their father had already made everyone hide under the bed, and had seized a revolver that didn’t work. “They were armed to the teeth. My father was sitting on the bed and told them he was the foreigner, they could kill him, but that his family was from here. In the end, they took everything, but spared our lives”, recalls Michael. After that had happened, and with the growing unrest in Accra, Mr Yano decided to return to Japan with his wife, Gifty, and his three children. It was a complete upheaval. “In Ghana, we led a normal family life. Our parents had time to spend with us, and they worked together in the restaurant. But in Tokyo, my father often came home from work after 10 pm. My mother didn’t speak Japanese and didn’t have a job. At home, there was a cultural divide”, notes David. “I remember the looks we got when we walked down the road or took the metro with our mother. The moment we went anywhere, the whole atmosphere changed”, adds Sanshiro. During an interview on NHK TV’s programme Break, he said he used to wish he could change his skin colour to be like the other kids. “I didn’t understand why I was different, and especially why being different was a handicap”. In Japan during the 1980s, even in Tokyo, foreigners were rarely seen, let alone people of colour. In addition, the capital had always conveyed the image of a unique kind of Japanese identity that excluded mixedrace people or others from different cultural backgrounds in the archipelago, such as the Ainu, from Hokkaido, or the Okinawans. “If you imagine a green coloured Martian arriving, people would be curious as well as frightened. It was a bit like that for us”, Michael adds.

The three brothers went to school in Japan, but didn’t speak the language. Their mother went back to Ghana; it was a difficult time. “I went straight to college after a time at an American school. You wear the same uniform as the others, but wherever you go all eyes are on you!” explains Michael, who remembers that standing out in a Japanese school caused him many problems. “You’re not allowed to be different in Japanese schools. The children must all have the same coloured hair, the same shoes. It’s not allowed to have permed or dyed hair. And there we were, with our afros! (laughs) The pupils went to see the teacher, and asked ‘why are they allowed to have a punch pama?!’” A punch pama, from the English “punch perm”, is a tightly permed male hairstyle that appeared in Japan in the 1970s inspired by afro hairstyles. However, from the 1980s, this style became synonymous with delinquent behaviour as it was worn by all the yakuza (organised criminal gangs). “In class, they shouted in my face: ‘Go back home!’, ‘Go back to America!’ I always fought back, often in English as I lacked the vocabulary. The teachers always pretended they saw nothing,” he continues. One day, he heard his younger brother Sanshiro speaking in Japanese. “He said: ‘You piss me off Takashi!’, and it was the first time I’d heard him speak in Japanese. It was a great shock!” 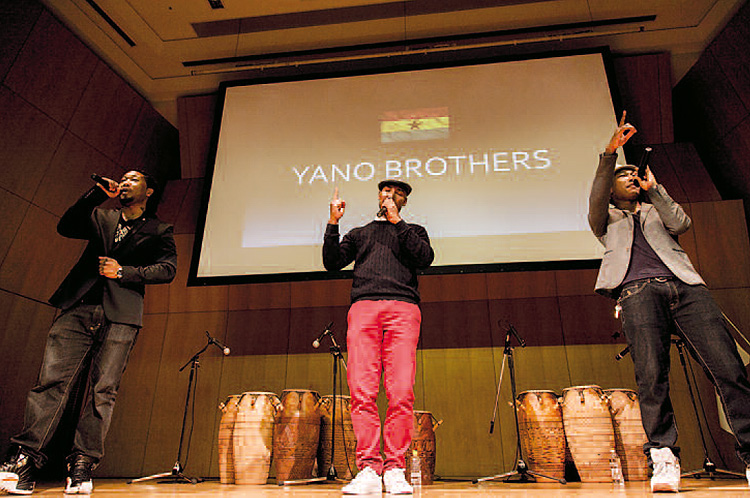 Since 2013, the Yano Brothers have found their way in life through music.

Sanshiro speaks the best Japanese and finds it easier to adapt due to his young age. “He quickly learned to sing in Japanese,” says David. Michael, on the other hand, found it more difficult and turned to sport. “I tried volleyball, but didn’t like being cooped up. In fact, when I first arrived in Japan, I didn’t even like wearing shoes! In Ghana, I’d always gone barefoot. I told myself that football was best for me.” As soon as he joined the team, he realised that being different could be an advantage. “So I developed a survival strategy!”.

David, for his part, decided to adapt by learning all the in and outs of Japanese society. “I felt it served no purpose for me to rebel, I had to study Japanese culture and language. I may well have been able to speak Japanese, but I was always treated like a gaijin, a foreigner.” At the age of 22, David decided to leave for Accra by himself. “I thought I would be accepted as a Ghanian! But everyone stared at me. I asked a taxi driver whether I looked like a foreigner. He burst out laughing and thought I was joking!” (laughs)

This was another blow to him in his search for identity, and he returned to Japan thinking he would never go back to Africa again. But, in the end, he decided to set up an organisation to help children in Ghana. “Now, I go back every year. I’ve come to realize that Ghana is a happy country at the human level, and Japan could learn a lot from that.” Michael, for his part, joined the professional football league, but didn’t feel at home there either. He ended his sporting career and played with several rap groups. Sanshiro continued his university studies. The brothers didn’t see each other again until one day in 2013. “David had written a song and suggested we all sang it for a birthday celebration. That day, we felt a connection between us for the first time, it was an overwhelming experience”, says Michael. The trio were immediately successful, and Michael started to write more personal lyrics. “I’d written a song on the occasion of Obama’s election. Having lived in the United States, it meant a lot to me. Obama reminds us of our African heritage, slavery, the Ku Klux Klan. The lyrics of One Step speak of all these things, but my agent advised me to tone down my comments. You don’t talk politics if you want to be star in Japan.” The Yano Brothers make television appearances in Accra where they made a music video for their song I Believe. A return to their roots and a reunion with their mother were both made possible through the means of pop music. “Thanks to music, we’ve discovered our true identity. I’ve been very influenced by the life of Joe Yamanaka, one of the only mixed-race Afro-Japanese of his generation to have made a career in music. He has also started the search for his unknown Jamaican father, and has made an album about it”, explains Michael. The Yano Brothers also have a unique message for all mixed-race people in Japan, and throughout the world. A message in which they don’t hesitate to use their own language, Jafrican. “Jafrican isn’t about nationality, it goes back to the roots of humanity, which originate in Africa. Ganbambe (from the Japanese ‘Gambare!’, meaning ‘Take courage!”

No55 [INITIATIVE] The importance of thinking big

No53 [IDOLS] Timeless Yuriko and Rebecca

No52 [ENCOUNTER] The importance of family ties

No33 [Gunma] Ancestral tradition under threat