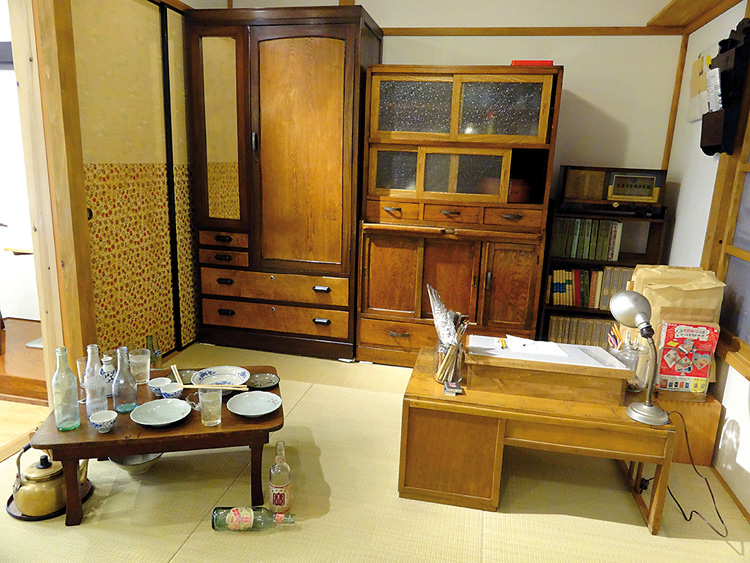 This is the route to follow if you want to retrace the footsteps of Tezuka, and immerse yourself in the history of manga.

Ikebukuro – once considered one of Tokyo’s sleaziest districts – has recently become a family-friendly playground attracting shoppers and pleasure-seekers from everywhere. Even on the otaku front, Ikebukuro is now one of the city’s major centres of activity and the main attraction for otome or female fans. However, you only have to take the Seibu Ikebukuro Line train and get off at Shiinamachi Station, a mere two kilometres away, to discover a completely different reality. Indeed, it feels like travelling not only through space but through time as well. Minami Nagasaki, the district south of the station, has a distinct Showa period feel, as many of the oldest buildings probably date back to the “golden 50s and 60s”.

Minami Nagasaki is far from being a tourist spot. On the contrary, it smells of decay and neglect. Many shops are boarded up, and if you visit the area on a weekday afternoon there are very few people around. But in the 1950s, it was a vibrant district and, most importantly for us, became what even today is known as “manga no seichi” (the Holy Land of manga), because for about a decade between the mid-50s and the mid-60s it was home to many comic artists, some of whom went on to become national pop culture icons.

The epicentre of manga activity was Tokiwa-so (Tokiwa Mansion), a two-storey apartment building that used to be located in a backstreet. Its grand name notwithstanding (the suffix “so” means manor or villa), this was a very basic building with a shared kitchen and no bathrooms, not even a communal telephone for its residents. But Tezuka Osamu, who at the time was living in Yotsuya, in central Tokyo, was particularly attracted to this area because, at the time, many manga artists were living along the Seibu Line. Eventually, he was able to find a room at Tokiwa-so, thanks to a Manga Shonen magazine editor. Tezuka moved into a second-floor room in 1953. He paid 3,000 yen (about 30,000 yen today) for a 4.5 tatami (9 square metres) room with a built-in wardrobe.

The year Tezuka moved to his new home, Kimba the White Lion, Tetsuwan Atom/Astro Boy and The Adventure of Rock were already being serialised, while Princess Knight had just begun its weekly run in January. Incredibly enough, the increasingly busy Tezuka was ranked as the biggest money earner among Japanese artists in 1953. A reporter for the Shukan Asahi weekly magazine visited Tokiwa-so and was surprised to find the successful mangaka living in such a cramped space. “In a sixtatami room in a cheap apartment building, furnished only with a desk and bookshelves, this popular artist was drawing manga late at night, wearing a simple blue jacket and tortoise shellframed glasses. He is just a lean-faced young man”. As Tezuka recalled later in his autobiography, he was so angered by the unflattering article that he immediately bought several expensive pieces of furniture, including a piano, so that, eventually, he could barely move in his small room.

After a few months, he was joined by mangaka Terada Hiroo. However, the following year Tezuka moved to Namiki House, a better building in Zoshigaya, to the east of Ikebukuro Station, where he probably had more space for his furniture. Nevertheless, when he left Tokiwa-so, he didn’t take back the deposit he’d paid, which meant that the manga duo Fujiko Fujio (the future creators of Doraemon and long-time Tezuka fans) could move into his old room. They remained there until 1961.

The building quickly became a magnet for aspiring artists, as Fujiko Fujio were soon joined by future manga greats such as Suzuki Shinichi (55-56), Moriyasu Naoya (56-57), Ishinomori Shotaro (56-61), Akatsuka Fujio (56-61), Yokota Tokuo (58-61), and the only woman among them, Mizuno Eiko (58). Other people would often drop by, resulting in a tightly-knit community of comic creators.

The Fifties were a time of rapid economic growth, but the life of an aspiring mangaka was far from easy. Still, this motley crew of twenty-somethings devoted all their time and energy to their art, even though many of them had to exist on a daily diet of cabbage and radish. Terada even went so far as to create, with the help of his younger house mates, the New Manga Party.

Tokiwa Mansion remained in its original form until 1982 when it fell victim to old age, redevelopment and general lack of interest. The building was rebuilt – this time with all mod cons – but at the height of the economic bubble and its rampant speculation, even the new building was demolished, and for several years the plot was left empty. The current building houses the Nihon Kajo Publishing Company.

Today, almost nothing remains of the places related to the “heroes of Tokiwa-so”. However, the district has retained that genuine atmosphere of past times, which modern society has obliterated elsewhere. At Shiinamachi Station we take the south exit (南口) and navigate the backstreets towards our destination. It’s along these narrow backstreets, rather than on the wide Yamate-dori, that you can feel the true atmosphere of the area. Notice that many places are boarded up, while others are overgrown with greenery. We finally reach Mejiro-dori, one of the area’s two main shopping streets, but before turning right, notice the red plaque commemorating Mejiro Eiga, the local cinema, which provided the main form of entertainment for most locals in the 1950s,including our penniless heroes. Though Mejiro Eiga is gone forever, you only have to go back to Ikebukuro to enjoy a pretty similar experience. Shin-Bungeiza (3F Maruhan Ikebukuro Bldg. 1- 43-5 Higashi Ikebukuro, www.shin-bungeiza.com) is a double-bill cinema showing re-runs of popular films and Japanese classics at low prices. Definitely recommended for film buffs. 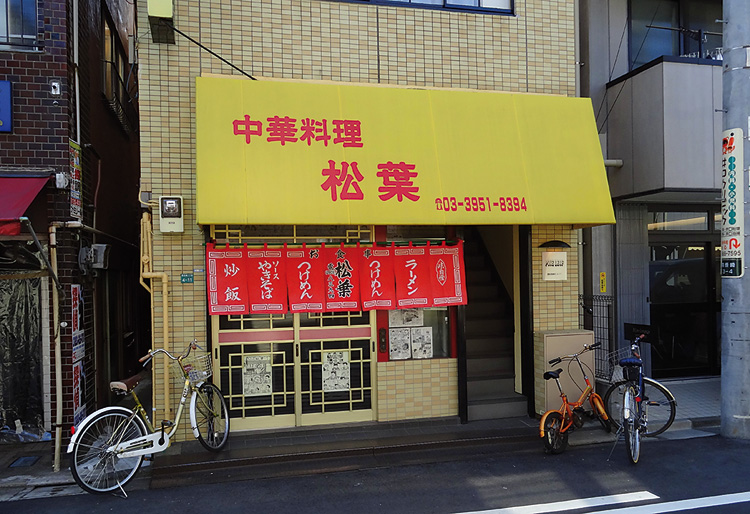 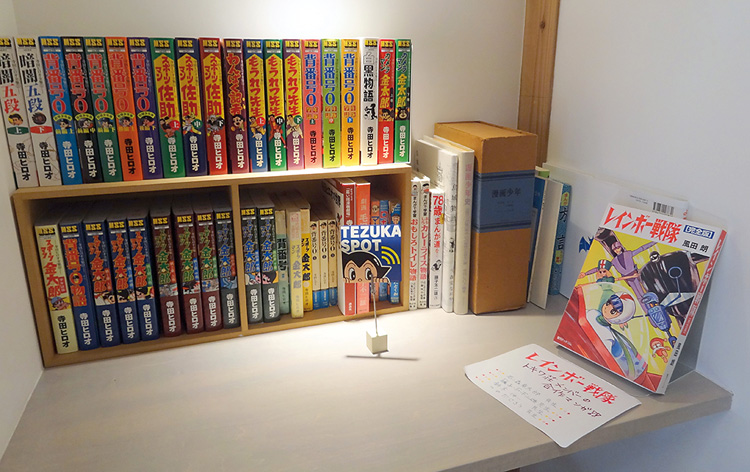 About 100 metres further down Mejiro-dori, there’s a building on the right with a blue signboard with MEVIUS written in white. Yokota Tokuo and the newly-married Akatsuka Fujio used to live here after leaving Tokiwa-so. The ground floor was occupied by a bakery, Kikukado, whose cheap bread, rolls and cakes they and other mangaka enjoyed.

We keep to the right when reaching the fork in the road with the police box in the middle, and finally enter Tokiwa-so-dori. One of the newer buildings on the right houses the Tokiwa-so Street Resting Station. This tiny two-story gallery-cumlibrary was opened in 2013 in order to preserve the memory of the long-gone Tokiwa Mansion and its residents. The first floor mainly serves as a reading space where you can freely peruse manga by the aforementioned “Heroes of Tokiwa-so”. The second floor features original art by several artists, photos, and a reproduction of Terada Hiroo’s room at Tokiwa-so.

Two streets later we turn right, and the third building on the left (the one with a light grey front, facing a car park) is Shiun-so (紫雲荘). When Akatsuka Fujio finally became too busy to do all his manga work himself, he rented a room here and hired a few assistants. The building was so close to Tokiwa-so that they could actually talk to each other from their windows. In a romantic twist to Akatsuka’s career, he eventually married his first assistant, and the couple moved to the apartment mentioned above.

Let’s keep walking past the car park, and on the second building on the right we can see the NTT (Nippon Telephone and Telegraph) logo. This is the Ochiai NTT office. In the 50s, when the Tokiwa-so residents had to make a call or send a telegram (do you remember telegrams?), they would come to this office or use the pay phone that was outside the building. With the growth of the weekly manga magazine business, when schedules and deadlines were impossibly tight, it was important for them to be able to keep in touch with their editors, and in an age when many houses didn’t have a private phone (including Tokiwa-so) and mobile phones were still the stuff of Sci-Fi stories, this telephone box was indispensable. We retrace our steps to Tokiwa-so-dori once again and find another red plaque on the next corner. If we follow the pointing finger, we’ll finally arrive at the former location of Tokiwa- so. On the left, we can see the apartment building’s original gatepost (the only remnant of the old house), while a small grey reproduction of the building has been placed in the right-hand corner. The whole scene is rather sad, and at the same time typical of the way historically and culturally important sites are treated in Japan.

At this point, you may be hungry and eager to have a break, and what better place to eat your fill than in the diner with the bright red and yellow sign. It’s called Matsuba, and it’s one of the very few places left from those years. It’s an old-style chuka ryori (Chinese food) restaurant. Here, you can choose between the usual range of ramen (Chinese-style noodles), tsukemen (cold Chinese noodles accompanied by soup for dipping), chahan (fried rice) and yakisoba (fried noodles). The Tokiwa-so gang used to eat here quite often, and they even featured the place in some of their stories (reproductions of some pages are attached to the door). Matsuba doubles as a sort of mini museum, and while you enjoy your food you can admire the many drawings the artists donated to the owner.

Full of food, we turn left towards our final destination: Hanasaki Park. This is the heart of the neighbourhood, and it’s not by chance that it’s devoted to our heroes. On the left past the entrance, there’s another bronze reproduction of Tokiwa-so, featuring Tsunoda Jiro’s scooter. This mangaka lived not far from here and used to pay frequent visits to his pals in Tokiwa-so. On the base of the monument we can see their self-portraits and autographs. The Shiinamachi 5-chome 2253 sign on the lamppost displays Tokiwa-so’s old address.

The great news is that Toshima Ward has decided to build a museum devoted to their story. The project started this year, and the museum should be ready in 2020, in time for the next Olympics. Tokiwa-so occupies an irreplaceable place in the history of Japanese comics, and if you want to check out how working- and lower-middle-class neighbourhoods looked and felt in the “good old days”, without all the fake tourist trappings, this place is definitely worth a visit.