students from iNsEAd were able to discover an unexpected side to Japan while on a trip to iida.) 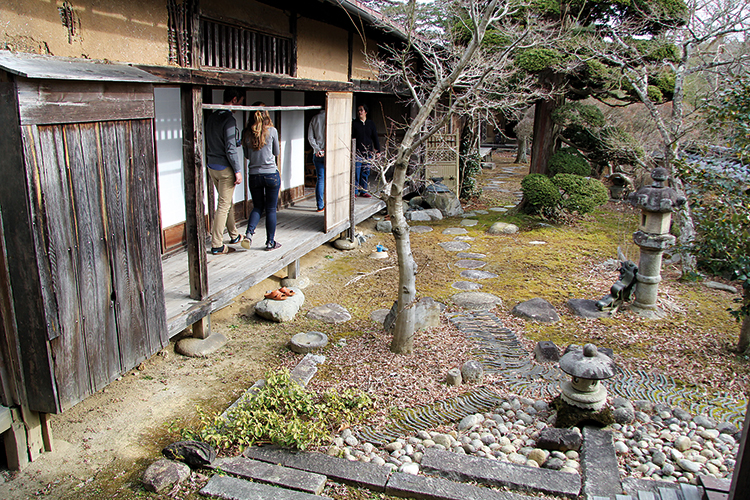 Staying with a resident is one of the best ways to learn about the country. in mrs aGemaTSu Tae’s home.

It’s in small cities like ours that you can really discover the heart of Japan,” boasts Shirota Akihisa, the town hall official in charge of education. You have to admit that Iida is really quite charming. Surrounded by mountains, this small, peaceful city is situated in the south of Shinshu Province (the former name of Nagano Prefecture), a name still used affectionately by its inhabitants. Here, they cultivate fruit, particularly apples, as well as all kinds of vegetables and rice. A rural district of around 100,000 inhabitants, Iida is also known throughout the the archipelago for its efforts in preserving the art of ningyo joruri or bunraku (traditional Japanese puppet theatre) by supporting its Imada Puppet Troupe, and the festival it organises every August. On this particular day, there’s a feeling of quiet euphoria in the city, not due to the arrival of spring weather, but because the bus has just arrived and everyone is ready to get down to work.

Around forty-three pupils from the European Institute of Business Administration (INSEAD) have travelled from Fontainebleau, Singapore and Abu Dhabi for a week-long visit to Japan, and they’re eager to discover what Iida has on offer for their weekend stay. In charge of organising the trip are NakayamaNarune, Makijima Takao and Nagase Jin, three Japanese students who are all part of INSEAD’s 2017-2018 intake. “At the start of the project, we simply wanted to let other students know about our country,” recalls Nakayama Narune. “To do this, we undertook to form partnerships with Japanese businesses, primarily those linked to higher education, but also travel agencies, then we decided on the itinerary.” Visits to Kyoto and Tokyo were obligatory, but “we didn’t want to limit ourselves to these two cities”. They added a visit to the hot springs of Arima Onsen and “after some research, Iida was an obvious choice”.

Why Iida? March 2017 was the first time the city welcomed 128 students from the London Business School. They rolled out a programme that completely won over the participants: they all went to a bunraku performance and also learned how to manipulate the traditional puppets, they visited Iida’s former school, which today serves as a centre for arts and crafts workshops and, finally, the outstanding event of the weekend’s activities, the 128 students were invited to have a taste of life on a farm for one evening and an overnight stay. “In Iida, we’ve been offering accommodation on farms for the past twenty years,” declares Yuzuwa Hidetoshi, who’s in charge of tourism for Iida. “It’s a very widespread practice among school pupils and Japanese tourists who come to visit the region. But it’s only recently that we’ve opened it up to international visitors.”

The city has been rewarded by the Japanese government for its efforts in promoting tourism. Last year’s visit by British students was such a success that word-of-mouth reports were all it took for INSEAD to come forward to enrol its students on the same programme this year.“The whole of the visit was planned around this key activity,”confirms Nakayama Narune. “The overnight stay on the farm is what really makes a difference,” insists Miyashita Toshihiko, from the city’s department of tourism. “There’s a great family atmosphere. Some farms even offer to involve their visitors in cooking the evening meal; it’s all very friendly.” Iida now has around a hundred farm lodgings, which can be booked at the local tourist office (Minami-Shinshu Tourist Bureau, Ltd). The experience differs according to the type of farmhouse, but it’s always unique and an unrivalled opportunity for human interaction. The INSEAD students are divided into groups of four for the overnight stay. So tonight, Agematsu Tae will welcome Gabrielle, a French student based in Abu Dhabi who’s getting ready to return to Fontainebleau at the end of this week in Japan, and Magdalena and Gonzalo, both from Seville, but currently based in Singapore. Built around 1500 in the hills surrounding the city, the farm where Agematsu Tae now lives alone is a piece of history. The thickness of the wall by the main entrance leaves you guessing about its past. Though, nowadays, no rice is cultivated there, the farm testifies to a former way of life when the family all huddled together around the irori (hearth), “the corner where the fire was kept alight day and night,” she explains. A very lively sixty-year-old, Agematsu Tae moves through the familiar rooms and corridors recounting anecdotes. “This was my room when I was little. I was born in Iida, and didn’t leave the city until I was eighteen years old,” she says with a smile. She closes the shoji (wooden sliding doors) and continues down the passage, which looks out over a beautiful garden. Above the surrounding wall, you catch sight of an incredible view of the mountain. The three students are lost for words.

Once the little group is settled into the farm outbuildings, which have been refurbished as guest rooms, they are taken on a walk in the countryside around the farm. The students follow Agematsu Tae across a field of onions, garlic and apple trees. “There are lots of wild animals around here,”she explains. “It’s not unusual to come face to face with a wild boar, tanuki (raccoon dog) or even a monkey.” The walk has made everyone hungry and it’s time to turn back for supper provided by the mistress of the house in the part of the house she usually reserves for her private use.

For the evening meal, Agematsu Tae has provided a salad of raw fish, shellfish soup, chicken with lemon and cabbage, tofu, and quantities of chirashi-zushi (raw fish and vegetables on rice) as is customary on Girls’ Day. The students think the food is quite delicious. Around the table, none of them share a common language, so a lot of juggling about is needed to understand each other. Despite these complicated verbal gymnastics, the conversation is very lively and the questions flow as well as the laughter. Gabrielle wants to know all about Agematsu Tae’s family, and the latter, whose daughter lives in Paris with her husband, remembers her last stay in France with pleasure, as well as the bread she enjoyed eating there. Galvanised by and to the delight of the mistress of the house, Gonzalo and Magdalena set about making a potato tortilla in the kitchen, just as they would at home. “If you’d told me that one day I’d prepare this dish in Japan, I wouldn’t have believed you,” confides Gonzalo, quite captivated by the situation. “This will definitely be the best evening I’ve spent in the archipelago.” In the morning, it’s difficult to say goodbye. The three students insist on leaving their contact details: “If you ever come to France or Spain, call us,” they murmur.

The following day, the Imada ningyo joruri theatre has been waiting for them since early morning to come and watch a performance followed by a lesson in operating the traditional puppets. To begin with, the students are not that impressed, but they rapidly discover that it’s not so easy to control the puppets. It takes three people to bring a bunraku puppet to life: hands, legs, facial expressions, accessories, all need to be manipulated at the same time.“To express sadness, the hand of the female puppet must cover her eyes, and there’s a small hook near to her mouth to help you hang the sleeve of her kimono,” explains Matsuoka Noriko, a local resident who’s come to help translate into English. “Then you need to move her hand towards her eyes.” Everyone is enjoying themselves.

The students continue their trip with a final stop at Kinehara School, of which the locals are especially proud. This impeccably preserved former education establishment is now reserved for special events such as handicraft workshops or film shoots. Some of the rooms serve as a museum displaying farming implements and weaving looms from times past. The school is an opportunity to explain to the students that Iida is also the capital of mizuhiki, a traditional, delicate decoration made of washi (traditional Japanese paper) and principally found on envelopes (for ceremonies, funerals, etc.). The students are invited to take away the items they’ve been shown how to make for themselves, and some of them continue to fashion knots while chatting with their friends over lunch in one of the classrooms. “Here, you can discover how the schoolchildren of Iida used to live,” says Inoue Masao, who’s in charge of the school. “In former times, the students ate lunch at their desks with their teacher sitting opposite them, just like now!” The centrepiece of the bento meal of the day are gohei mochi, a local speciality made of sweetened rice with miso, which are devoured by the students. It’s already time to say goodbye. On Monday morning, the 43 students from INSEAD will all fly to different destinations. “Our school has three campuses, all on different continents, so this has been an opportunity to spend some time together, to share a unique experience and strengthen future ties.” Like most of his colleagues, Nakayama Narune worked in finance for several years before enrolling on this supplementary study year, which allowed him to widen his international horizons. His course completed, he will return to his post in the Ministry of Finance in the Japanese government having made new acquaintances and with an address book filled with contacts. As the bus leaves for its four hour journey to Tokyo, around twenty Iida residents continue to wave goodbye to the students..