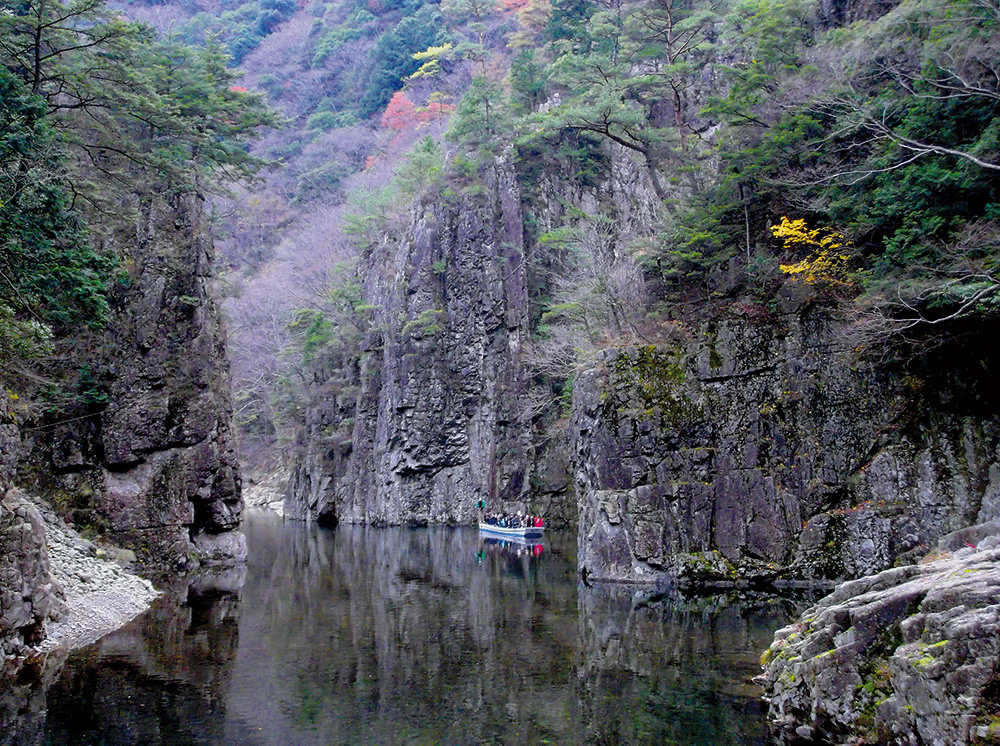 Located less than an hour and a half from Hiroshima, those who love stunning scenery will be delighted.

The cherry blossom has all blown away for another year, but there are still plenty of reasons to be cheerful in Japan this month. The weather is warming up nicely after a long cold winter. Cascades of lilac wisteria have replaced sakura as blossom of the month, closely followed by the multicoloured masses of azaleas. Plus we’re entering the new Reiwa era (see Zoom Japan no. 70, April 2019). And, for those living in the Hiroshima area, Sandankyo Ravine is finally open again for hiking after being snowbound for most of the winter.

Sandankyo Ravine is Hiroshima’s most spectacular natural beauty site, and favourite hiking trail. The 13-kilometres-path follows the Shiwagi River, a tributary of the Ota River, through a primeval landscape of sheer cliffs, dense forests, and crashing waterfalls (Sandankyo means “three-tier waterfall gorge”). And this natural wonderland is just 70 kilometres northwest of Hiro-shima City, so it’s an easy day-trip.

Yet hardly anyone knew of Sandankyo’s existence until 1910, when photographer NANPO Kuma discovered it and introduced the site to the rest of the world. Since then, it has remained largely unspoilt. This is thanks to the protection it enjoys as part of the Nishi Chugoku Sanchi Quasi-National Park, and also to its status as a National Special Place of Scenic beauty since 1953. It’s one of only six ravines to be so designated by the Japanese government. France’s highly-respected Guide bleu travel guide series awarded Sandankyo Ravine its highest rating of three stars, putting it on a par with Hiroshima’s two World Heritage sites, Miyajima and the Atomic bomb Dome.

Spring, summer and autumn all have their own distinct appeal up here in the ravine. At this time of year, it’s full of the soft exuberance of spring, while high summer is a refreshing few degrees cooler than down in the sweltering city. In autumn, it’s at its most spectacular, as the trees put on their fabulous annual show of reds and yellows and golds. At that time, visitors are disgorged by the coachload and swarm along the narrow path.

but now, in spring, the atmosphere is far more relaxed. You may even spot the fabled Japanese giant salamander. This indigenous amphibian grows up to 1.5 metres long, making it the second largest salamander in the world. And it loves to hang out in a fast-flowing rocky river environment like Sandankyo.

First, however, if you’re going by car from Hiroshima, it’s well worth making a little detour to see the Ini Tanada rice terraces. They are in the picturesque area of Akiota, like Sandankyo. Ini Tanada is officially one of Japan’s top 100 traditional rice terraces. CNN Travel featured it in their list of Japan’s 36 Most beautiful Places. You’ll see more than 320 terraced rice paddies, carved out of the hillside, and irrigated solely by mountain water. The oldest stone wall is said to date back some 500 years to the Muromachi period (1336-1573). even if you visit out of the rice-growing season when the paddies are just brown stubble, it’s quite mesmerizing to see the contours of the walls winding around the mountainside. 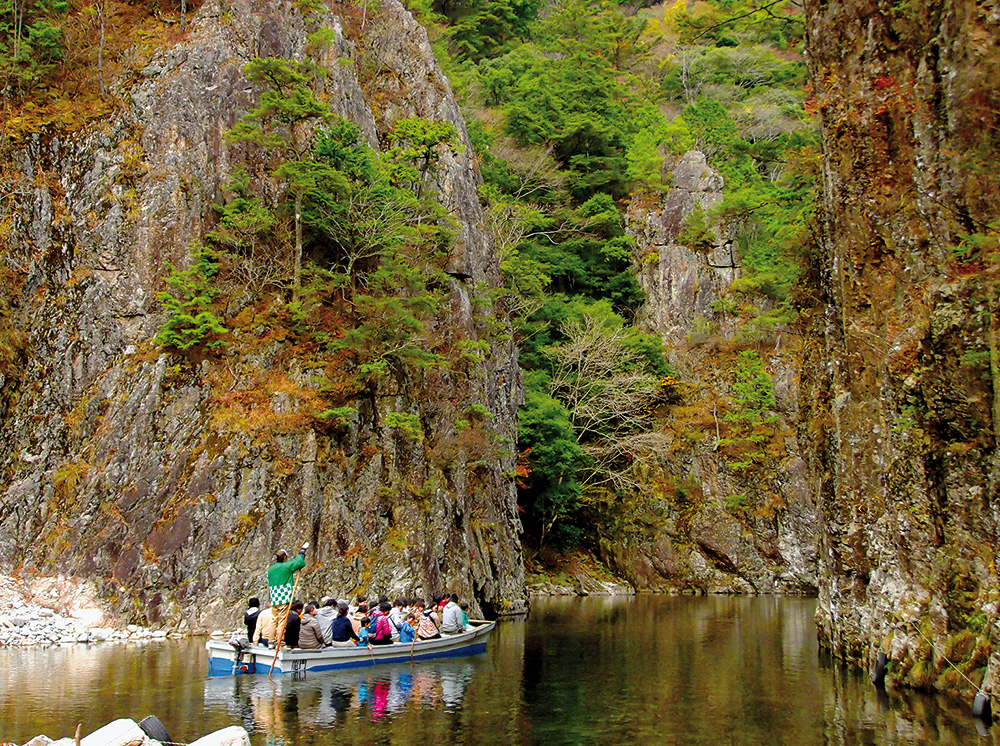 At Sandankyo, a broad street of little shops and restaurants awaits you, lending it the atmosphere of an old frontier town in the crisp mountain air. From there, you walk across the red bridge, past the charming Sandankyo Hotel (the ideal place to soak your weary muscles in the onsen on the way back) and on to the start of the path which follows the river. Here, the river mellows into a deep calm pool where you’ll see people in rental canoes, the bright pink and blue craft adding a splash of colour amid the foliage.

Soon the river narrows as it winds and rushes and splashes over ancient boulders. The path is flanked on one side by a rocky drop down to the river and a steep, impenetrable forest on the other. but it’s not an arduous hike, which means that it’s popular with people of all kinds and ages – serious hikers in sensible clothes, elderly ladies with bells on their backpacks, families with kids, and groups of workers in designer sportswear.

As you walk on, the riverbed flattens out, and the waters become calmer. Waterfalls cascade down the mountainside into limpid pools of emerald green, overhung with pine trees. Some cenof the ravine’s most famous beauty spots are around here, all with evocative names like Tatsu no Kuchi (Dragon Mouth Torrent), or Shimaidaki (Sister Falls – two parallel waterfalls). After an hour or so, depending on how often you stop to take photos or just gaze in wonder at the idyllic landscape, you come to the boarding point for the ferryboat. The ride only takes a few minutes, but it’s well worth the 500 yen (£3.50) round trip. The two ferries are long flat bottomed craft, sitting low in the water. Although they have outboard motors, these are seldom used so as not to disturb the serenity of the surroundings. Instead, a cheerful pilot in a green happi coat uses a long bamboo pole to punt the boat round the bends in the river, past sheer rock walls where tenacious trees cling, apparently rooted in the rock itself. The close proximity of the tranquil water and towering canyon walls induces a dreamy sense of wellbeing, making it the perfect way to get your daily dose of wonder.

The ride is over far too soon, and you disembark at a point called Kurofuchi (black Abyss). Despite the grim name, this little outpost of civilisation is an enchanting spot, dominated by Kurofuchi-so – a rustic teahouse, which, after all your exertions, looks like the restaurant at the end of the universe. Most passengers from the boat head straight for the entrance, anxious for their fill of scrumptious udon noodles and musubi rice balls. 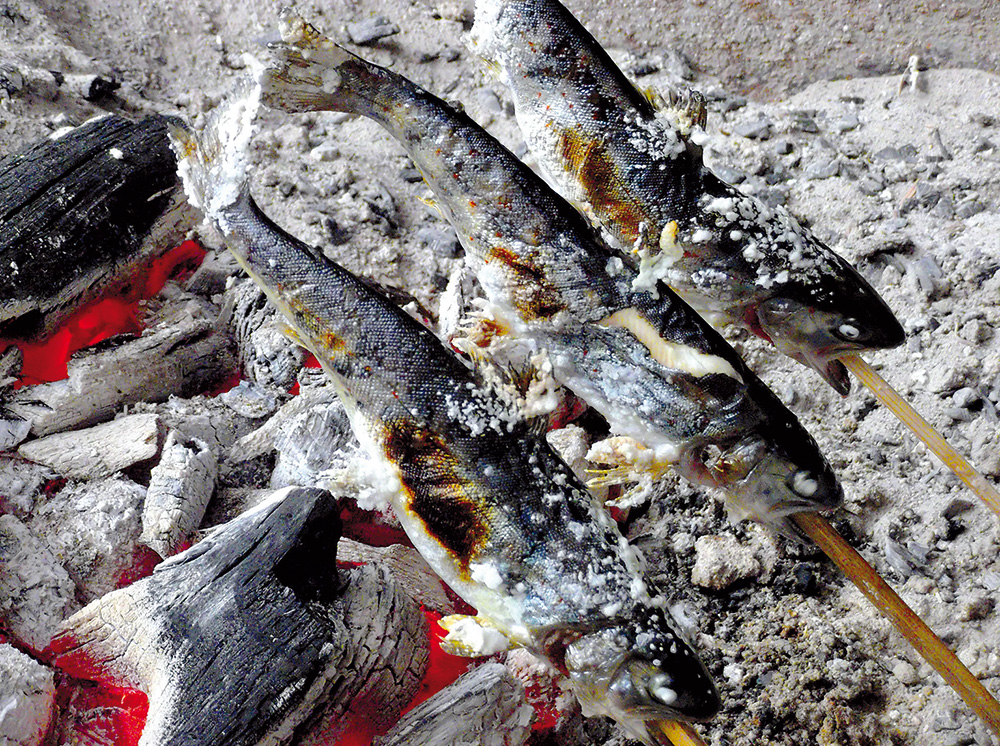 Outside the teahouse, ayu (sweetfish) freshly caught from the river below are grilling over an open fire. Alongside the fire stands a large glass tank. You get closer to find out what’s inside and stare in disbelief at what you see: a pair of Japanese giant salamanders. Looking like catfish with legs, and a big head that’s nearly all mouth, they are two of the oddest animals you’ll ever see. They are adorably cute, in an ugly sort of way. The poor things look bored, like most captive animals do. Yet one can’t help but feel grateful for the chance to see such primordial creatures.

After all, spotting one in the wild is about as likely as meeting a platypus in Harajuku.

Kurofuchi is far enough for many day-trippers. Once they’ve finished their noodles, they line up to take the ferry boat back. Alternatively, you can walk across the hanging bridge, which sways gently in the breeze, back to the path on the other side of the canyon. but if you still have time and energy, there’s still plenty to see, including the three-tier waterfall that gives Sandankyo its name. You can also take another boat ride, through the narrow passage known as Sarutobi, where the steep dark canyon walls are barely 2 metres apart. The entire trail, ending at Hijiri Lake, can take up to 5 hours each way.

The wonderful thing about Sandankyo is that however remote and inaccessible it sounds, you can catch a bus from the bus Centre in the centre of Hiroshima that will drop you right by the front gate. Just make sure you don’t miss the bus – there’s only one express bus a day!

FROM HIROSHIMA the express bus leaves from platform 7 at Hiroshima Bus Centre (3rd floor of SOGO Department Store).
Buy your ticket at the window. It costs 1,400 yen (£9.80), one way, and leaves at 08.00.

Travelling time: around 80 minutes.
When to go: from the end of April to the end of November.
Accommodation: Sandankyo Hotel
postmaster@sandankyo.co.jp
tel: +81-(0)826-28-2308