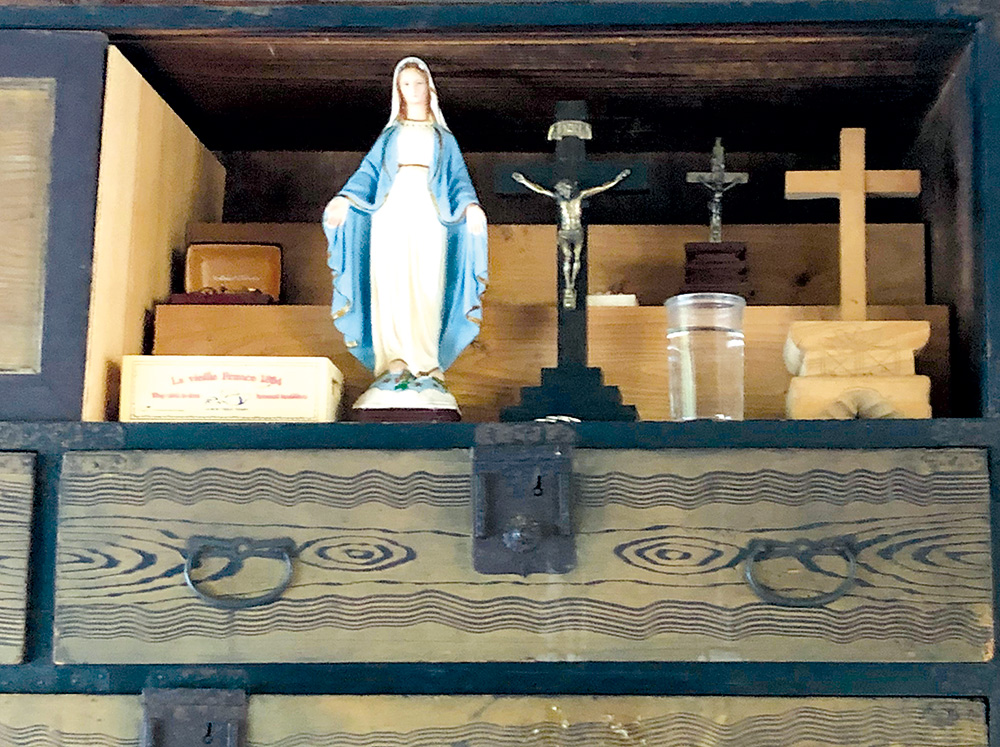 In Sakitsu’s streets, here and there you can catch sight of Christian religious items.

The Amakusa islands were one of the principal centres of Christianity in Japan.

Located in the south of Shimoshima, which alongside Kamishima is one of the two largest Amakusa islands, the little fishing village of Sakitsu embodies the peaceful coexistence between the three major religions of the region: Buddhism, Shintoism and Christianity. A symbol of this harmony is the shuincho, a stamp-book handed out to the faithful in which they can collect and display the seals of the temples and shrines they visit to pray. Unlike any others you come across in Japan, the one you get in Sakitsu is unique. It has a third page featuring the vermilion seal of the local Catholic church. The Fuoken temple superior sports a wide smile because the document illustrates the particular characteristic of this village, which was registered as a Unesco World Heritage site at the beginning of summer 2018 and at the same time as Oura Cathedral, in Nagasaki, as well as other sites connected with the persecution of Christians at the turn of the 17th century.

Amakusa did not escape from this campaign to eradicate the Catholic religion launched by the shogunate in 1614. It was even more vigorous in this part of Japan, where there was a greater number of Catholics. The Portuguese missionary Luis de Almeida, who took an active part in the evangelisation of Kyushu, converted a large number of people there at the end of the 16th century. Amakusa became a very active centre thanks to the setting up of the Amakusa Gakurin or Amakusa Collegio, which de Almeida founded, and thanks to a Gutenberg printing press he encouraged the distribution of religious and literary texts. In addition, missionaries and other Catholic followers from the Kyoto region fled here to escape being attacked, so the region became one of the most important bastions of Catholicism in Japan.

This explains why political resistance to the ban imposed by the shogunate authorities was particularly vigorous, especially around the time it was enforced in 1637. Until then, those in power tried to get the residents to prove they were not Christian by means of the fumi-e test, which consisted of forcing people suspected of being Christians to trample on effigies of Jesus or the Virgin Mary. Those who refused to renounce their faith were either deported or, more often, executed. The violence that progressively descended on Amakusa led a large number of faithful to rebel under the leadership of the young Masuda Shiro, better known as Amakusa Shiro. A memorial was dedicated to him in Amakusa (977-1 Oyanomachinaka, Kami-Amakusa. Open from 09.00 to 17.00, 600 yen). Almost 27,000 insurgents took refuge in Hara Castle, an ancient fortress in Nagasaki Prefecture, which they fiercely defended against the shogun troops, which numbered 120,000 men. The remains of the ruined castle are also registered on the Unesco World Heritage list, and you can see an impressive diorama of the battle at the Amakusa Christian Museum (19- 52 Funenoomachi, Amakusa. Open from 08.30 to 18.00, 300 yen). The rebels’ banner is also on display, a direct witness of this commitment to defend their faith against a powerful force determined to destroy them. The shogun even obtained the support of the Dutch troops in Hirado, to the north of Nagasaki, in order to attack the castle from the sea.

Several months later, the siege resulted in a disastrous defeat for the Christians, and most of the ringleaders were beheaded. This uprising, known as the Shimabara Rebellion, was followed by numerous atrocities carried out on the orders of the shogunate powers, as can be seen just a few steps away from the Amakusa Christian Museum where you can see the Stele of 1,000 martyrs, situated in the park named after the city it overlooks. It was here that Hondo Castle once stood, the former stronghold of the Christian daimyo Konishi Yukinaga, who was defeated in the famous Battle of Sekigahara (1600), which allowed Tokugawa Ieyasu to tighten his control over Japan and subsequently to strengthen his rejection of any kind of Christian influence. As in other parts of Japan, this anti-Christian policy was reinforced after 1638. Despite being persecuted, Catholics continued to practise their religion in secret, which gave rise to the term “Hidden Christians” (kakure kirishitan). If you visit the Rosary Museum (1749 Oe, Amakusa-machi. Open from 08.30 to 17.00, 300 yen) located in a part of Oe Church, which was built of white chalk in 1933 by Father Ludovic Garnier, you’ll discover the ingenuity of these persecuted followers who organized small, secret prayer rooms and created little statues of the Virgin Mary disguised as Kannon, the Buddhist goddess of mercy, to escape being caught and tortured as were so many others. In Sakitsu, in the Suwa Shrine which towers over the church built in 1934 half in wood half in cement due to a lack of resources, the Hidden Christians forced to worship there chanted “Anmenriyusu”, a distortion of “Amen Deus” so as not to draw attention to themselves. For more than two centuries, the Christians of Amakusa had to prove their ingenuity. The fact that these sites are now on the Unesco World Heritage register shines a light on this tragic history, of which the local population is very protective. When the freedom to worship as a Catholic was reestablished in 1865, it meant that leading foreign missionaries from Paris could return, such as Father Ludovic Garnier to Oe or Father Augustin Halbout to Sakitsu. Though inhabitants might once have feared persecution, nowadays those who believe in Jesus or the Virgin Mary no longer hide away. The churches, where you sometimes take off your shoes and sit on tatami mats, are full during services, and in the streets of Sakitsu, if you look up you can see statues of Mary in some of the houses.

At the port entrance, a larger statue of the Mother of Jesus has been erected. She protects the fishermen who each wave to her as they pass by. But that doesn’t prevent them taking part in matsuri (local festivals, see Zoom Japan no.33, July-August 2015), largely influenced by Shintoism. In Sakitsu where the three religions harmoniously cohabit, before the present church had been built, the former place where Christians worshipped was adjacent to the Suwa Shrine, as testified by the presence of statues of Mary, and a cross. Beneath the blue skies of Amakusa, religions have made peace.