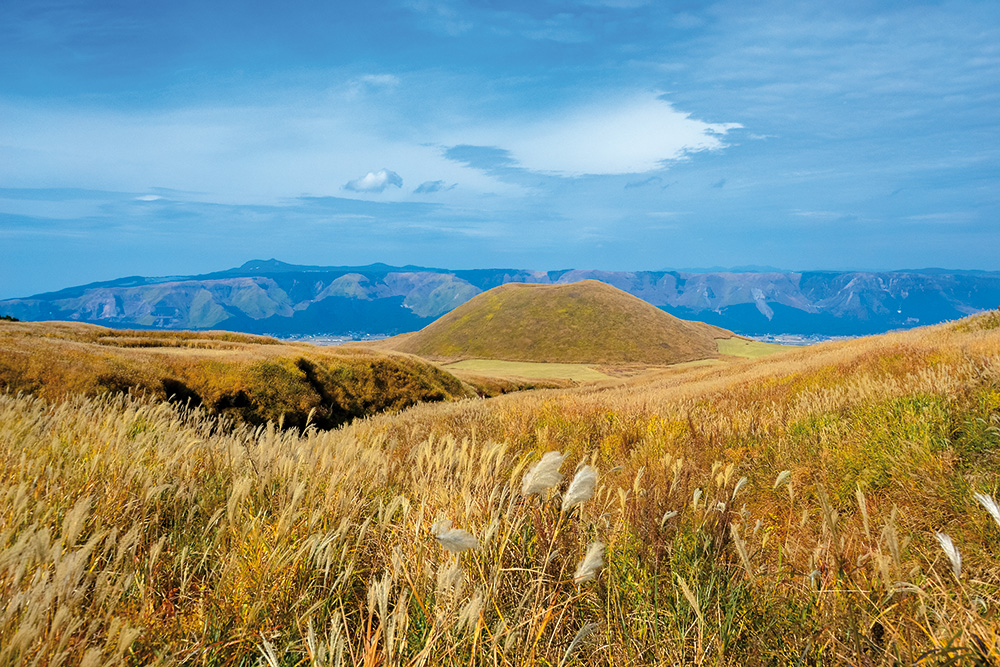 The perfect cone shape of Komezuka, one of Mount Aso’s five volcanic peaks.

This impressive volcanic site has so many surprises in store for lovers of nature.

The route called the Aso Panorama Line twists and turns around the slopes of volcanos hidden from view behind the white feathery plumes of pampas grass, though we’re not in Argentina, but in the west of Japan on the island of Kyushu, a vast volcanic region in the heart of Kumamoto Prefecture. “Look, here’s Nakadake,” calls Yui, our guide, pointing to a smoking crater at a height of 1,506m. Mount Aso’s caldera is one of the largest in the world, within which there are five active volcanos, including Komezuka, a perfectly symmetrical cone covered in yellow flowers which resembles an enormous caramel flan placed on the ground. The road continues to climb up to the entrance to Aso- Kuju National Park (Aso Kuju kokuritsu koen), then towards Nakadake, enveloped in impressive amounts of white steam escaping from fumaroles. The 300,000-year-old volcano is the most active in Japan and the only one you can get close to despite the toxic gases it emits in varying amounts from day to day. “People suffering from asthma or respiratory problems are asked not to approach the edge of the crater!” the loud-speakers announce in three languages. “The cable-car that takes you to the crater is still out of service,” warns Yui, moving towards the booth to pay the entrance fee. The influx of tourists has decreased sharply since the earthquake that struck Kumamoto in April 2016. It caused little loss of life, but did a lot of material damage. The member of staff asks us once again if we are in good health, then give us a leaflet which is more like an emergency instruction manual than a tourist guide. “Danger!! Volcanic gas emissions!!” is written in red on a map with explanations of symptoms in the event of inhaling sulphur dioxide or hydrogen sulphide. “The volcano is particularly active today,” explains Yui, noting the absence of hikers who usually walk along the paths to reach the crater. A few minutes later, we stop in a car park close to several barriers destroyed by the earthquake. The air is heavy with gas and the bunkers give the place a touch of the infernal. Aso is the god who protects you from disaster, but Mount Aso has erupted 160 times since 533, which was the first angry outburst to be documented in Japan. It remains one of the 110 most active volcanos in Japan (see Zoom Japan no.26, December 2014). At the edge of the 600m diameter giant crater, there’s a thick pall of smoke. The lake below is completely invisible. “It only needs the wind to change direction for you to see it,” confirms a steward protected by a mask, who tries to persuade the visitors to be patient. This National Park employee works a rota with three other stewards due to the toxic gases. By his side, a vendor is trying to attract the attention of some Chinese tourists: “Come and buy some Nakadake sulphur! It’s a very effective repellent against snakes, ants, moles, even crows!” he exclaims pointing to his stall covered in the yellow ore. “You should have seen the boulders thrown out during the eruption two years ago – they weighed at least 35t,” adds the steward. In October 2016, the turbulent volcano had an “explosive” eruption, which resulted in the danger level rising to 3 out of 5. The surprise eruption covered the town of Aso with a thick layer of black ash, and made the 100,000 inhabitants somewhat fearful. In 2014, Mount Ontake, in the centre of the archipelago, became active completely unexpectedly and killed 60 people, mainly hikers, reminding everyone that nature is unpredictable. 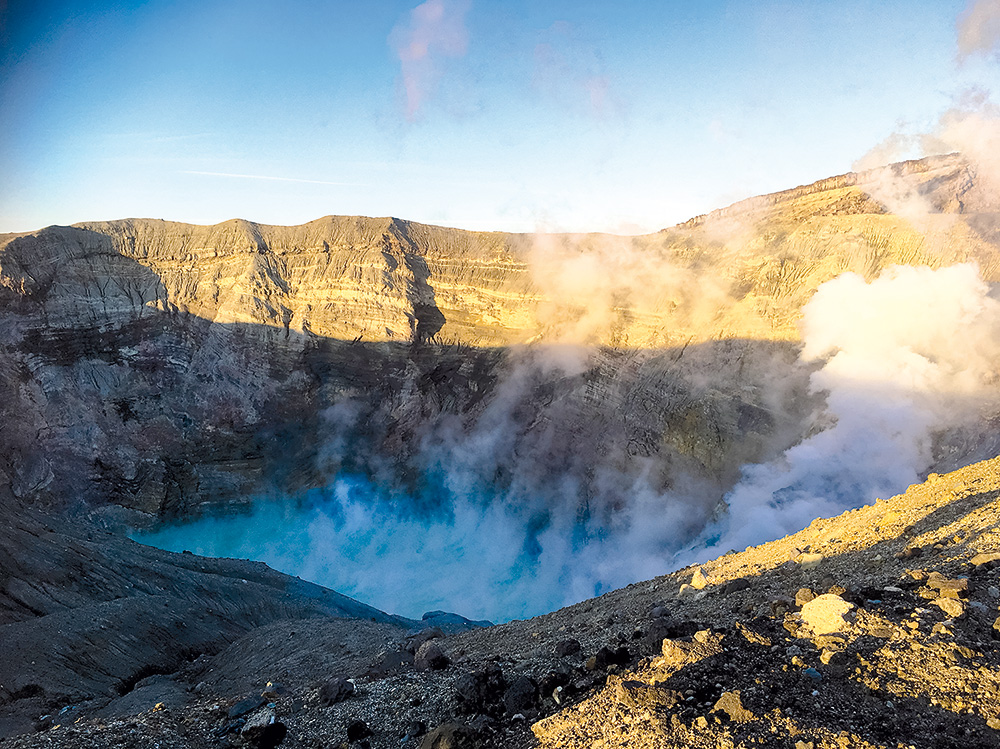 Nakadake, the only active volcano that can be approached, has an acid lake that is 160m deep.

A ray of sunshine pierces the steam from the mass of fumeroles. At last, the cloud dissipates and the beautiful turquoise colour of the lake becomes visible. It’s a vast pool of acid, which reaches a temperature of 60 degrees and plunges to a depth of 160m. A few minutes later, the lake is obscured again by the gases which seem to double in intensity. Throats are burning and people can be heard coughing. The loud-speakers order us to descend quickly. “Hurry up, this is an emergency evacuation!” About twenty tourists rush to reach the smoke filled car park. “Access to the crater is sometimes completely forbidden, we were lucky to be able to see it,” affirms Yui, quickly getting into his car. When the site is closed, visitors can make their way to the Mount Aso Museum (Aso-kazan Hakubutsukan, Nagakusa, Aso. Open from 09.00 to 17.00, 860 yen. www.asomuse.jp). Located at the park entrance, it has a great many interesting documents on display and retraces the history of the Aso volcano and its inhabitants. “There are also beautiful hikes on the slopes of Mount Nakadake and Takadake,” adds Yui, showing us pictures of Sunasenri, an amazing volcanic desert accessible on foot from the park. You can also ride a horse across the green plateau of Kusasenri at the foot of the crater if the gas fumes allow it… Suefuji Yoshikazu, born in Aso and around 60 years of age, puts it into perspective: “In my day, there was no warning system and everyone lived with the gas fumes. Since someone’s death was attributed to gas inhalation, the authorities have put all these access restrictions in place!”. 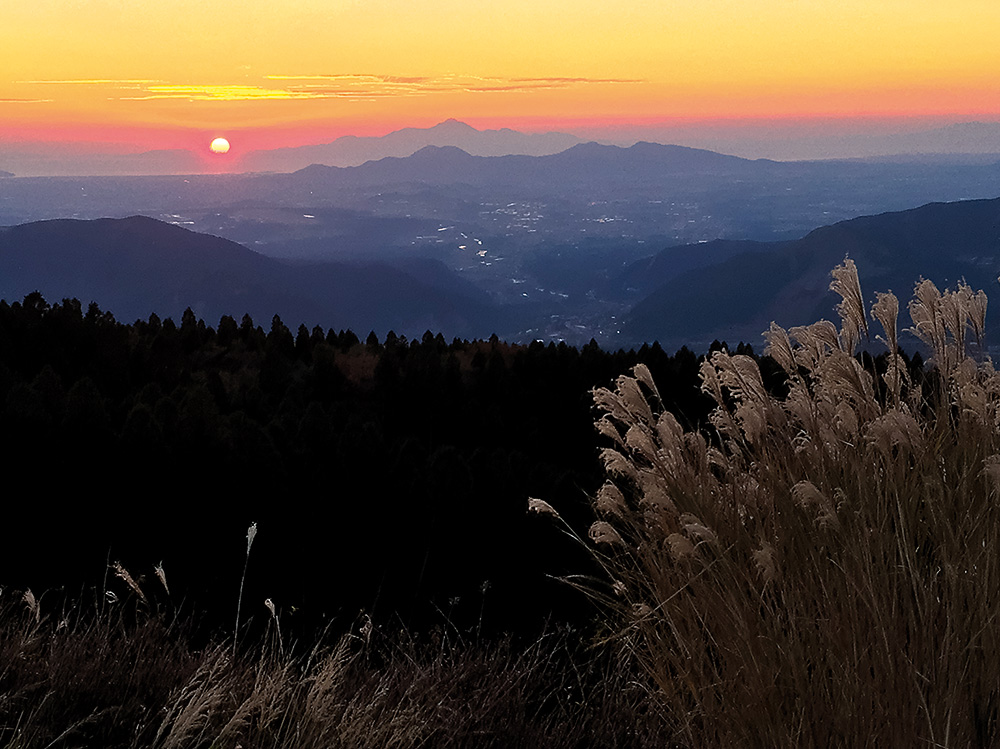 A horse breeder for 33 years, he admits to having the fright of his life when he saw Nakadake explode in the middle of the night several months after the Kumamoto earthquake in April 2016. It was the first time it had happened in 35 years. “The site was closed for a year. Now, things are starting up again slowly,” he grumbles, showing us a row of horses idly waiting to be rented out. The Aso horses are well-known throughout Japan as the Ban’ei breed, an equine cross with European characteristics (see Zoom Japan no.59, March 2018). “It was all down to the Percheron and Breton horses that were brought from Belgium and France to Hokkaido, to be put through their paces by taking part in the celebrated Ban’ei races,” explains Suefuji Yoshikazu, describing the races where horses must pull heavy loads over several hundred metres. These competitions were all the rage after the Second World War and remain popular even if more classic horse racing has superseded them. Nowadays, breeding these extremely valuable horses is very costly and has become the prerogative of a few breeders who rent them out for somewhat off-putting prices: 8,000 yen (£54) for 25 minutes. “It costs more than a million yen to buy a mare!” insists the breeder.

The Aso horses are also sold for their meat, which is used for making the famous basashi, horse meat sashimi. Numerous restaurants offer another Aso speciality: akaushi steak, a breed of wagyu (Japanese beef) that’s particularly tender, which you can enjoy after a session at an onsen. Among the 1,500 hot springs in the region, the most celebrated is still the Jigoku onsen, or “baths of hell”, constructed in the crater of Mount Yomine after it had erupted. This very old establishment (2327 Kawayo, Minamiaso Village, http://jigokuonsen. co.jp) is made up of several hot spring baths and a lovely restaurant where you can enjoy kebabs cooked on an irori, a traditional stove used for heating and cooking. Unfortunately, it’s closed for refurbishment, like many establishments damaged by the last earthquake, and should reopen sometime in 2019. Yui then takes us towards the west of Aso, to the hot spring baths of Iwakura Onsen (http://iwakura0026.com), with a superb view over the Kikuchi River flowing through a valley. It’s an opportunity to discover the Kikuchi Gorge on foot, which is celebrated throughout Japan for its magnificent autumn scenery. On a hike that takes around two hours, along a trail known as a “power spot” as it is capable of regenerating both body and soul, we walk through the forest bordered by waterfalls and cascades of red and gold foliage. On our return, we walk along a road with farmsteads and houses on either side which are typical of Mount Aso, before branching off towards Aso Shrine. It is 2,300 years old, houses many important cultural objects, and is said to be run by the 91st generation of the same family. Part of it, the famous twostorey Romon gateway, was damaged by the earthquake and is being rebuilt at the moment. However the Shinto shrine still welcomes pilgrims, many of whom are local inhabitants who come to appease the volcano god Takeiwatatsunomikoto, grandson of the Emperor Jimmu and founder of Japan. According to the ancients, the eruptions of Mount Aso were a symptom of the anger of the kami (gods) and could be followed by famine and plague. This is easy to believe when you watch the craters aflame with the colours of the setting sun. The incandescent reeds sway like hair and the caldera is covered in grades of beige and ochre. In the shadows, only Nakadake’s fumaroles are still spitting out steam, which remains visible for a long time in the dark sky, offering us a final view of its volcanic power.

FROM KUMAMOTO, it’s easy to travel either by train or bus. By rail, it takes between 1 hour 10 mins and 1 hour 40 mins to reach Aso station via the Hohi Honsen line. However, as reconstruction work following the 2016 earthquake has not been completed, it’s best to catch the Kyushu Odan bus (nos.1,3 or 7). It takes 1 hour 40 mins from Kumamoto Bus Terminal (bus stop no. 26, 1,500 yen, first departure at 07.44) to Aso station. Then 35 minutes on the Aso crater bus (650 yen) to the “Asosan Nishi-eki mae” bus stop for access to the Nakadake crater.