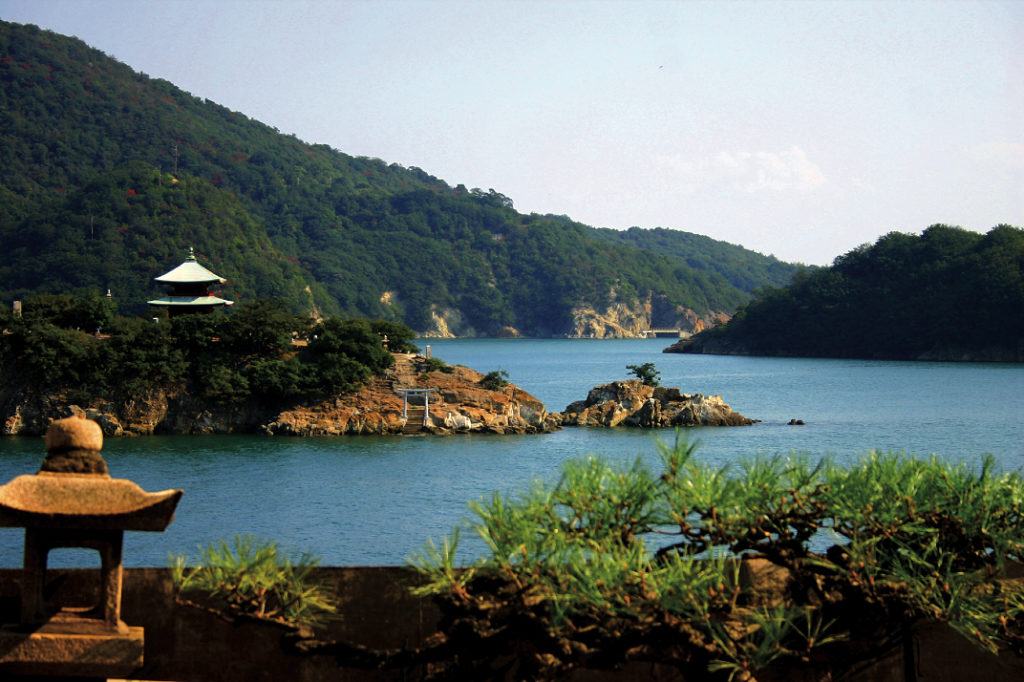 “The most beautiful view in Japan”. This is how a Korean emissary described what he saw from a window at the Taichoro guesthouse in 1711.

Hiroshima Prefecture is full of wonderful places. One of them is the charming port of Tomo-no-ura.

The priest from Fukuzenji Temple, sitting cross-legged on a cushion in the Taichoro Guesthouse, is explaining the significance of the astounding view that lies beyond the window. Floating in a sapphire sea, looking close enough to touch, are the tiny islands of Sensui and Benten. On the latter, a bright orange pagoda pierces the dark pines like a flame, while a little torii on the shore lets visitors know the island is sacred. In 1711, Korean envoy I-Pan-On referred to it as “the most beautiful view in Japan”.

But, continues the priest, it’s not just a pretty view. For centuries it also served as a cosmic calendar, written in stars across the sky.
“The positions of the stars and the planets relative to those islands told people when it was time to celebrate the solstice, equinox, October moon, and New Year,” he explains.

He then brings out a box of ancient relics: sundials, scales, lanterns, scrolls – a treasure trove of memories spanning hundreds of years. Each object has a tale to tell, and the priest intends to recount them all. But the guide bows, his head nearly touching the tatami, and apologises, telling him that his small audience of about twenty visitors is out of time and has to hurry on to the next stop on the trip.

The priest shoots him a quizzical look, then shrugs his shoulders good-naturedly, looking just like the Dalai Lama. Time? Hurry? Such concepts are alien to his universe.

In the street outside, the dazzling morning sun sparkles on the waters of Tomo-no-Ura bay. Tomo is a delightful little fishing town at the tip of the Numakuma Peninsula, 14 km south of Fukuyama, in Hiroshima Prefecture. Taichoro is a National Historical Landmark, built in 1690 as an annex to Fukuzenji Temple to serve as a guesthouse for visiting emissaries. The story of the celestial calendar is just one of a thousand charming tales woven deeply into the town’s fabric.

Nestled in its half-moon bay overlooking the Seto Inland Sea National Park, Tomo has been inspiring poets and artists for centuries. A thousand years before I-Pan-On’s visit, eight poems about Tomo were included in the Manyoshu (an 8th century collection of Japanese poems), including this one by Otomo Tabito:
“Whenever I see that juniper on the rocky beach of Tomonoura
I will remember my wife who used to see the tree with me
How can I forget her?” 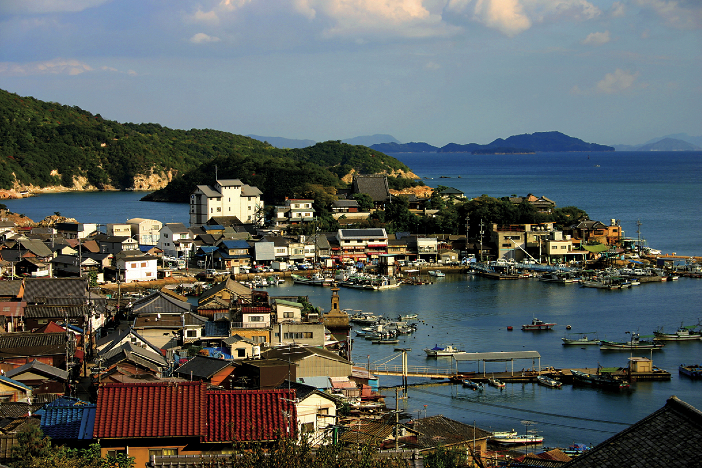 Tomo-no-ura owes its prosperity to its ideal location.

In 1929, Tomo’s seascape inspired blind koto master, Michio Miyagi (1894–1956), to compose Haru no Umi (The Spring Sea). More recently, in 2008, anime director Hayao Miyazaki chose Tomo as the setting for his Gake no Ue no Ponyo (Ponyo on the Cliff) after spending two months at a house overlooking the port.

More recently, in September 2012, Hollywood director James Mangold, actor Hugh Jackman, and rest of the cast of The Wolverine descended on the town to shoot some scenes for the film. Mangold chose Tomo out of more than fifty villages throughout the country because it evoked the beatific Old Japan he knew from the films of Yasujiro Ozu. Jackman went fishing in Tomo bay and tweeted photos of himself with Tomo’s iconic 17th century Joyato stone lighthouse in the background.

1,300 years after Otomo penned his poem,
Tomo’s timeless view still bewitches
everyone who sees it.
Well, nearly everyone. 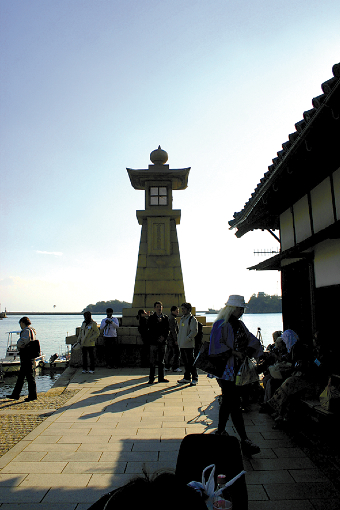 The Joyato stone lighthouse, one of the city port’s
treasures.

In 1983, this invaluable piece of living history was threatened by local authority plans to build a 180-metre bridge right across the old port area, along with a 4.6-hectare landfill site and a large car park, which would have obliterated the fabled view. Despite vociferous opposition from residents, Tomo seemed doomed to lose its most charming asset.

Its plight attracted attention from over 45 national and international preservation groups, including the World Monument Fund (WMF) and the International Council on Monuments and Sites (ICOMOS). The WMF even helped restore one of Tomo’s historic merchant’s houses, with a grant from American Express. The house is now an information centre and guesthouse.

In April 2007, around 160 local residents filed a lawsuit beseeching Hiroshima District Court to prevent Hiroshima’s governor from issuing a reclamation licence. Nevertheless, in June 2008, local authorities proceeded to request permission to commence work on the project. Then, in October 2009, the court made a landmark ruling, blocking the project and recognising the residents’ right to preserve their townscape. Even so, the local authorities declared their intention to appeal.

Happily, in June 2012 three decades of intense struggle paid off when incoming Hiroshima Governor Hidehiko Yuzaki scrapped the bridge project and undertook to preserve the port area. It was a rare victory for conservation over concrete.
“It’s a big and good step forward when we think about the future of Japan, not only about Tomonoura,” commented Ponyo director Miyazaki. So what inspired such tenacious resistance? Well, there’s far more to Tomo than its enchanting view. For a start, it’s the only complete Edo-era port in Japan, boasting around 80 Edo-era buildings. But its historical importance goes much further back. Tides from east and west converge here. Since ancient times, ships would wait here for the tide to turn, earning it the name shio machi no minato (port of waiting for the tides). Other vessels sought refuge in its sheltered bay while waiting for a storm to pass.

During the Edo Era (1603-1867), it prospered as a port for trade with continental Asia. It’s said that its shops were so busy they remained open around the clock. Emissaries from Korea and the Netherlands praised the beauty of the town.

It’s also believed that poet and scholar Sanyo Rai (1780-1832) worked on his influential history of Japan, the Nihon Gaishi, in Tomonoura, while anti-shogunate royalist Ryoma Sakamoto hid out here after his ship, the Irohamaru, was sunk in 1867. The wreckage was only found 100 years later, and is now on display in the Irohamaru Museum, beside the Joyato lighthouse.

This rich historical legacy infuses Tomo´s labyrinth of narrow streets, old temples and windwhipped alleys, where every other building is a Designated National Asset. You can smell it in the old wood of the merchants’ houses. Like the Ota Residence, a former homeishu (a sixteenherb rice wine, the local specialty) brewery, famous not only because its early-Edo owners had the exclusive rights to producing homeishu, but also because in 1863 Sanjo Sanetomi and six other court nobles stopped off here on their flight to Choshu (present-day Yamaguchi) following the coup of September 30, 1863.

Then there’s the legend of the Whispering Bridge, Tomo’s very own Romeo and Juliet story. During the time of legendary Emperor Ojin Tenno (reigned 270-310), two lovers rendezvoused in secret at the bridge each night. The man was Takenouchi noomi-Watari, in charge of entertaining envoys from Korea. The woman: a hostess named Enoura. Gossip spread around town, and the two mysteriously drowned at sea. Today, the bridge is just an unassuming hump in the middle of the road. But who can resist a good romantic mystery?

Yet Tomo is no mere museum piece. It’s still a functioning port. Wherever you look in the port area, you’ll see fish and octopi hanging on racks to dry in the sun. The tranquil streets are still home to shadowy old stores – kimono shops, chandlers selling oars, lanterns, and ships’ wheels, artisanal stores still brewing homeishu, reputed to cure fatigue and promote longevity. 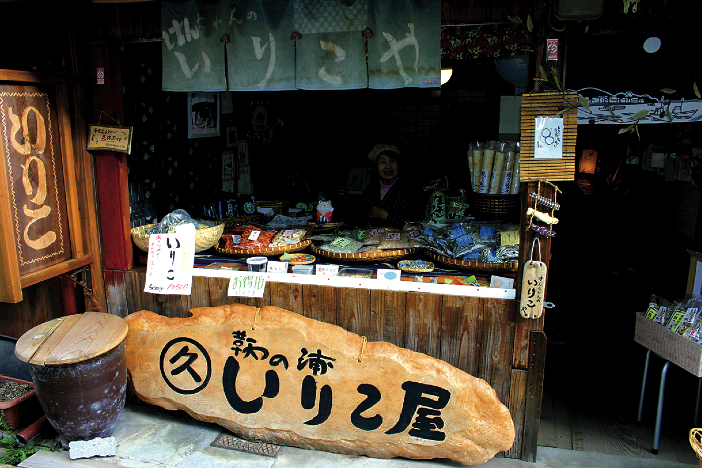 Moreover, new memories are continually being added to the old ones, like new strata in an ancient rock face. You can now follow the “Wolverine Route”, featuring such must-see places as the historic Ken-chan irikoya shop, where Hugh Jackman stopped to sample dried sardines, or the tunnel that appeared in the Ponyo movie, where Jackman’s Wolverine co-star and Ponyo fan, Rila Fukushima, tweeted a photo of herself. Tomo even has an AKB48 connection, after the girl group’s singer Misaki Iwasa had a number one hit with Tomonoura Bojo in January 2014. The accompanying video features all Tomo’s quintessential sights, including the view from Taichoro, the one where it all started.

It’s a privilege to still be able to contemplate this tranquil timeless scene today, unblemished by some monstrous bridge. After all, it’s not every day you get to gaze upon the most beautiful view in Japan.