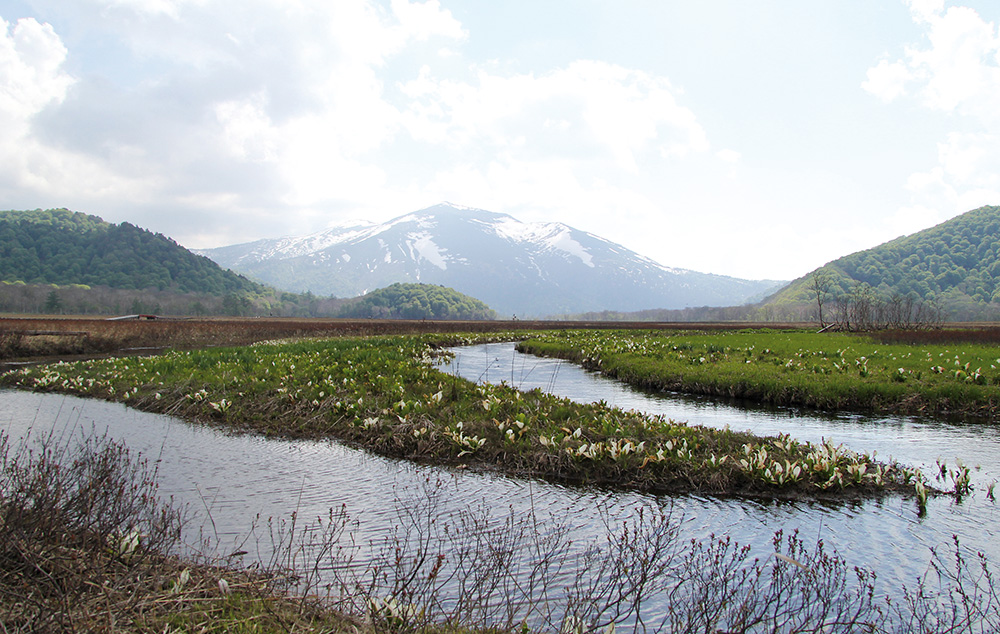 Ozenuma Lake offers a magnificent view of the surrounding mountains.

A real gem, this national park encompasses several mountains and the largest area of marshland in the country.

If you love mountain hiking, Oze is, without doubt, the most beautiful place in Japan”. For many years, this has been the recurring recommendation of friends and acquaintances. Oze, the national park in question, straddles four prefectures: Niigata, Fukushima, Tochigi and gunma. It encompasses mountains, rivers, miles of hiking trails, several summits to scale for the more experienced as well as the largest area of marshland in Honshu. Though the Archipelago naturally turns its attention towards its coasts and the sea, it’s also a land of mountains, and many Japanese are passionate about climbing these peaks that are part of the region’s terrain. In Oze, the highest point is Hiuchigatake (2,356 metres).

It’s 07:00 at the bus terminal in shinjuku. The outgoing express bus to the Oze trailhead entrances, which only runs between mid-May to mid-October, sets off. The passengers are laden with all the gear for the perfect hiker: shoes, hat, walking sticks. some even carry camping equipment and bells to frighten off the brown bears that live in large numbers in this area. I look at my jean jacket and suddenly wonder if it’s up to the job. The person sitting next to me is also travelling alone. smiling broadly, she’s also keen to see this stunning natural landscape she’s heard so much about. “My aunt used to come to Oze every year to recharge her batteries. she adored this park. she’s just died at the age of 92. In her memory, I wanted to discover the place for myself.” Originally from shizuoka, Kyoko likes challenges. she has travelled “to europe and lived for a few years in the united states.” Nowadays, she helps her father, a farmer, in his rice fields, but also in the cultivation of fruit and vegetables from his native prefecture. When she has any free time, she “travels alone, especially in mountainous regions. I love hiking, but also climbing mountains.” Hiking is a very popular leisure activity in Japan.

Oze National Park is open from April to October. In winter, snow and temperatures of 20°C below prevent any access to the lowlands and mountain peaks, even for the most experienced climbers. The end of May and beginning of June are undoubtedly the best time to visit the area as it’s the season when mizubasho (white skunk cabbage) is in bloom in the Ozegahara marshland and around Lake Ozenuma. The most daring will rub shoulders on the summit of Mt. Hiuchigatake, but the last patches of icy snow remain at this time of year and can cause bad falls.

My trip will last for three days. After reaching the marshes on the first day and spending the night at Akatashiro, I will start out at dawn to get to Lake Ozenuma, and then on to find the historic Chozogoya mountain hut, before hiking down to Oshimizu on the third day. The first part, between Hatomachitoge and the trailhead entrance to Yamanohana, is bordered by four rivers: Hatomachisawa, Yosezawa, Tenmazawa and Kawakami. In May and June, you can delight in admiring the rhododendrons and azaleas. After a good hour’s walk, the Ozegahara Marshland is revealed: it’s the most popular area of the park for visitors, who are particularly numerous at the end of May, the beginning of June, and in the second fortnight in July. At a height of 1,400 metres above sea level, walking along the wooden boardwalk you can smell the scent of countless flowers, while admiring the mountain peaks visible on the horizon. If you listen carefully, at certain points along the way you can hear the ushibuki, the song of the wind, which intensifies when its passage is restricted. You are surrounded by a tangible and exhilarating sensation of having left civilization behind you for the ends of the earth. As the marshland comes to an end, you’re faced with a choice: the path to the waterfalls of sanjo and shibosawa or the path leading to Lake Ozenuma. Both routes encircle Mt. Hiuchi. The area around the lake, which I chose, is dense with conifers and is the habitat for numerous species of birds like the iwatsubame (Asian house martin). If you’re very lucky you’ll catch sight of an okojo, a beautiful local stoat. This part of the park is also dense with flowers, which bloom in succession in harmony with the rhythm of the seasons.

There’s a twisting mountain trail that leads you to the lake after leaving the marshland behind. 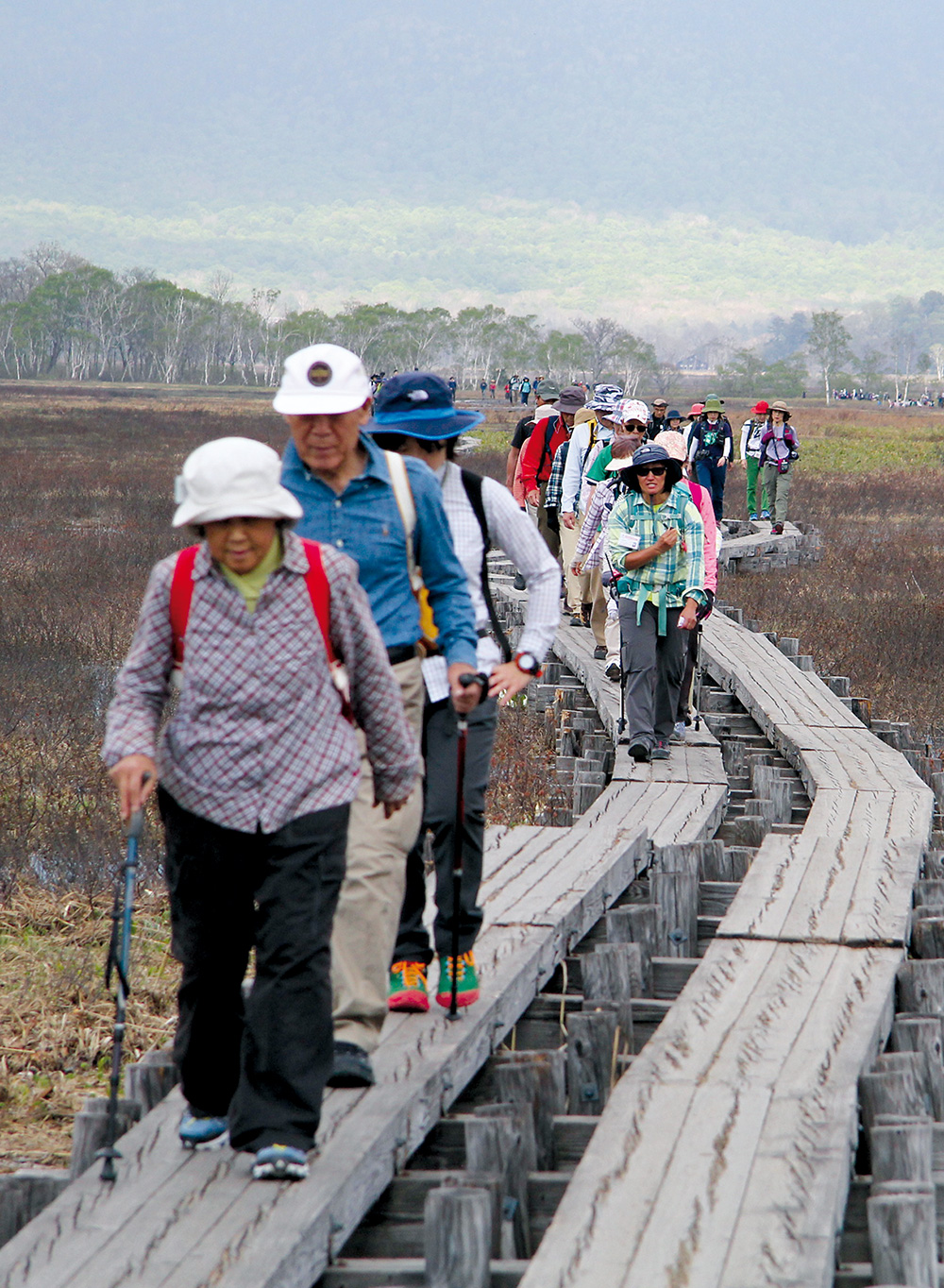 Oze National Park has been very popular with Japanese hikers since the 1950s.

The remaining snow makes it difficult to locate the edges of the path. At the start of the season, the weather is mild, but patches of ice can cause falls. “There are many accidents at the moment, almost daily,” confirms the caretaker of one of the shelters along the lakeside. “The hikers are often quite old, usually over 70 years of age, and they don’t pay attention. They chat, take photos without looking where they’re going, and over they go.” The shelter smells of freshly cut wood, and you can buy coffee and sweets there before going on your way. “There’s been no electricity here for a long time,” smiles the chatty caretaker. “Beforehand, we could offer you udon and soba noodles, but after a power failure, everything burned down. so we decided to stop everything. We use solar panels for the toilets.”

I soon realise that the lush and unspoilt natural setting of Oze is hard earned. In order to protect it from the crowds of hikers who visit it every year, drastic measures have been put in place to ensure the damage they cause is kept to a minimum. At the beginning of the 1950s, the region experienced an increase in the number of visitors, and the massive influx of hikers had a very negative impact on the park’s vegetation. Measures were quickly imposed to protect the area. It began with the removal of 1,400 waste-bins, and now hikers are asked to collect and remove their own rubbish as long as they are in the park. At the heart of Oze, in the 23 mountain huts used by walkers, no soap, shampoo or toothpaste is allowed in order to prevent water pollution. electricity is turned off at around 21:00 to save money, and in the park there’s no telephone, let alone internet connection. Complying with the rules of the mountain you rapidly learn that far from being restrictive, they give you a real feeling of satisfaction by adapting to the conditions around you. You have to admit that you feel quite small and insignificant in the midst of so many natural wonders, and it’s easy to learn respect for your surroundings. The rising and the setting of the sun mark your waking and sleeping. In the embrace of the benevolent and soothing atmosphere of the mountain, you discover a feeling of complete freedom.

For HIRANO Taro, aged 50, the preservation of Oze is part of his family history. Born locally, he lives in Tokura, on the gunma Prefecture side of the park, with his wife, who’s from Kumamoto, and their five children aged from 6 to 17. He manages two mountain huts and a lodge that is now used by winter sports’ enthusiasts. His great-grandfather Chozo, born in August 1870 in the village of Hinoemata, Fukushima Prefecture, built the first mountain shelter in the park in 1910. It was he who actually built Chozogoya (around 9,000 yen (£70) for dinner and breakfast. http://chozogoya.com), close to Lake Ozenuma, which is run now by HIRANO Taro. Chozo also founded the shrine on Mount Hiuchi, which he built after becoming a shinto priest at the age of 20. 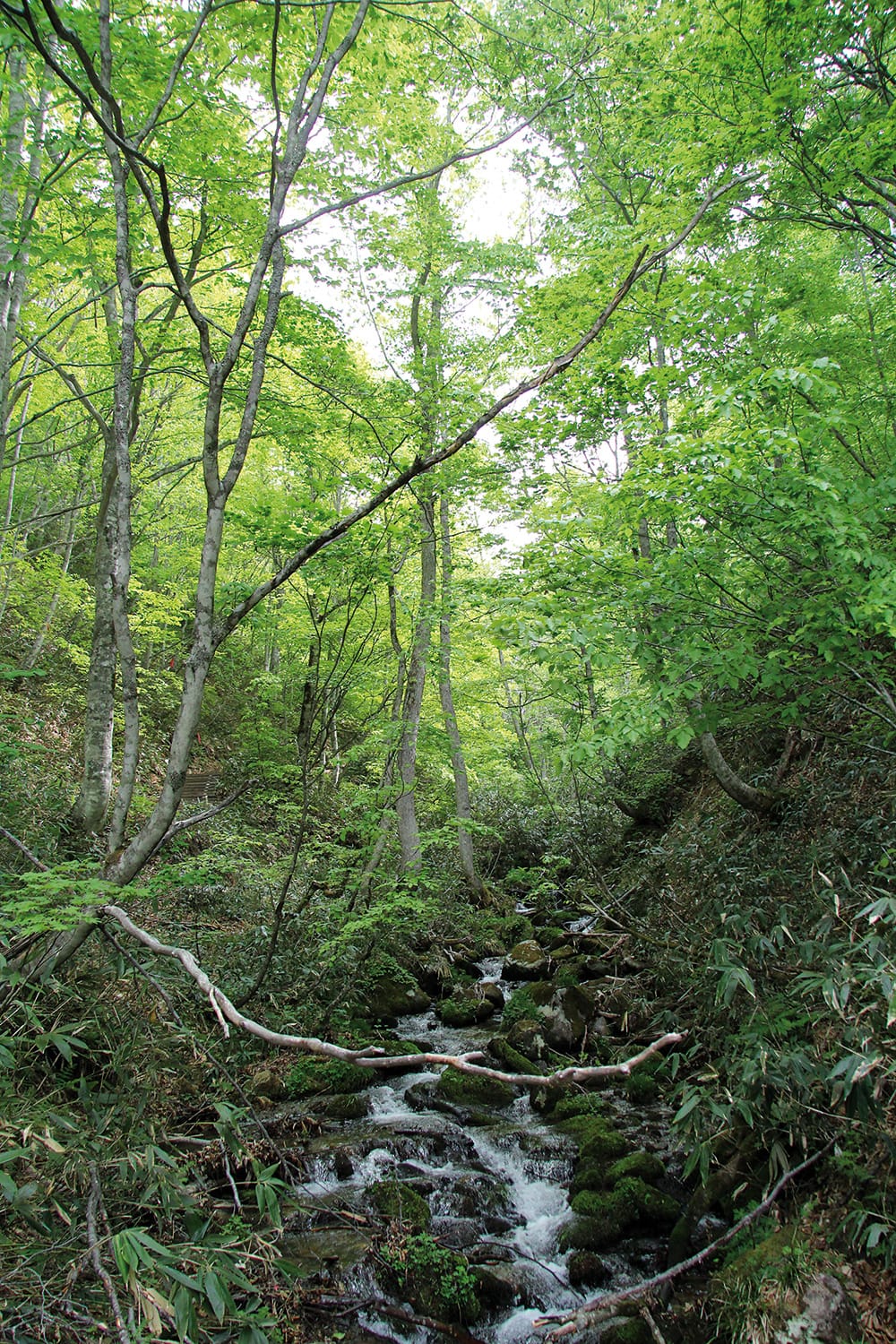 Don’t forget to take a bell to frighten away the many bears who live in the region.

Two generations followed Chozo, namely Choei and Chosei, respectively grandfather and father respectively of Taro, who represents the fourth generation. “Choei, my grandfather, was a very gentle, kind man,” he says. “He liked to read and write poetry.” during the second World War, he joined the army and the mountain hut fell into disuse. In addition to the fashion for hiking, Oze Park had to face its greatest threat in the 1970s: a plan to build a road that would have scarred the landscape. Taro’s father was impelled to take a public stand, writing that “he was deeply saddened to see Mother Nature being destroyed right in front of my eyes”. The Oze Coservation society was set up a little while later, and completed the preservation process (www.ozefnd. or.jp/en/).

Chosei died suddenly at the age of 36, leaving his wife Noriko to take over until one of his three children was ready to take his place. “I was very small when my father died, I don’t really remember him. When I was younger, I studied engineering in Hokkaido and specialised in water treatment. I also lived in Africa for two years, working in a professional capacity,” HIRANO Taro says. Then, “I have to admit that I felt under some pressure to take over: my family heritage is closely linked to Oze’s well-being,” he smiles. More than twenty years after taking over responsibility for the mountain huts and family guest houses, he’s still happy living close to the park and Mount Hiuchi, which he’s climbed twice. “Oze is a place I love with as much passion as ever,” he says.

FROM SHINJUKU, an express bus takes you to Tokura or oshimizu (about 4 hours). It’s the easiest way to get to the park. The bus only runs from mid-may to mid-october. From Tokura, you need to catch another bus to reach the Hatomachitoge trailhead to gain access to the ozegahara marshland (45 minutes). The park is accessible on foot from oshimizu: you can access oze from Lake ozenuma, where you’ll also find the Chozogoya mountain hut http://global.kan-etsu.net/en/express/oze.html

FROM TOKYO STATION, take the shinkansen as far as jomo-kogan then catch a bus. In winter, ski resorts are also open for winter sports’ enthusiasts.