It’s October and in Europe that means cooler weather as the chill of autumn sweeps through the continent. That’s when I start to long for sweets that warm me inside, so I would like to introduce you to «dorayaki».

How would we classify this sweet and where does the name come from?

The main ingredients are flour, eggs, sugar and sweet bean paste. They are mixed and cooked to make two small fluffy pancakes which sandwich red bean paste inside.

These days, there are many variations with different flavoured bean paste, and also cream and chocolate to be enjoyed by all ages. Amongst a number of theories about the name’s orgin, the most popoular is that it comes from a percussion instrument called a «Dora», found in Buddhism and Kabuki classical music. This instrument might be called a gong in the west and bears obvious similarities to the shape of the panakes.
In the Edo period (1603-1868) the pancakes were much thinner, more like a crepe, and would be filled with bean paste and folded square. One theory says the frying pan with a crepe resembled the gong leading to the sweet’s name.

The origin of dorayaki and the history of the current dorayaki

It is believed that the round dorayaki with bean paste sandwiched between fluffy pancakes like today was first made by Mr. Morita Seibei, the third owner of Umekatei, a shop in Nihonbashi Kodenmacho, Tokyo in the early Meiji era (1868-1912). Before that, instead of sandwiching it with thick pancakes, the bean paste was firmly wrapped with panackes as thin as rice crackers.

Still today the Umekatei dorayaki is made in the same way, looking like the dora or gong. Dorayaki is now sold at other stores, and the change to a «thick pancake sandwich» shape is thought to be due to the introduction of bread and hot cakes from the West during the Meiji era. When a thick dough was baked with a large amount of flour, it sold well, so thick dough is now the popular version. In some areas of Kansai, there is also a version called Mikasa-yaki, which is named after Mt. Mikasa in Nara prefecture.

Recently, the filling is not only bean paste, but also custard, chocolate cream, cream and fruit, and also ice cream. There is a new style of dorayaki with unlimited possibilities.
There is also an interesting version of dorayaki that is fried like tempura! In the sweets class I host, I always try to make less interesting things look more appealing and cute.
I make my own version of dorayaki with anko piped into flower decorations in between two pancakes. Before eating I would put the top pancake on top of the flower to make a sandwich in the same way.
Of course, I do feel a little sad squashing the beautiful flowers! However, sweets are not just delicious and beautiful – they are something to be enjoyed as part of a social gathering, chatting with friends. 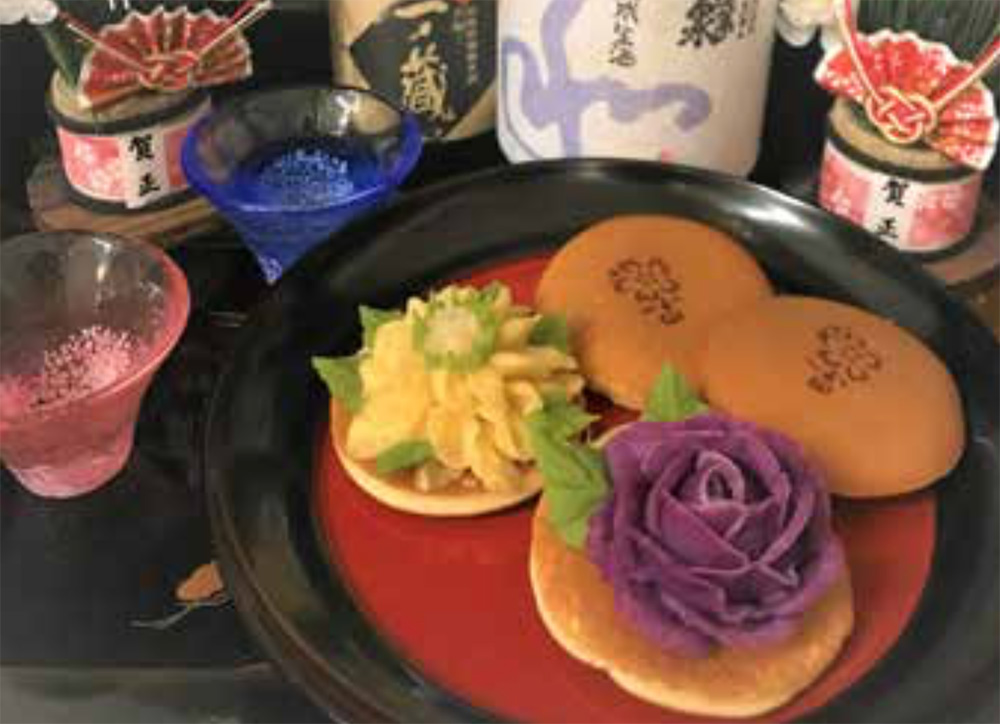 I am introducing Japanese sweets with recipes that you can easily make with ingredients that you can get outside Japan, so please try making them. And if you find your own interesting filling or a new way to eat dorayaki, be sure to give it a go. Please share it with me too!