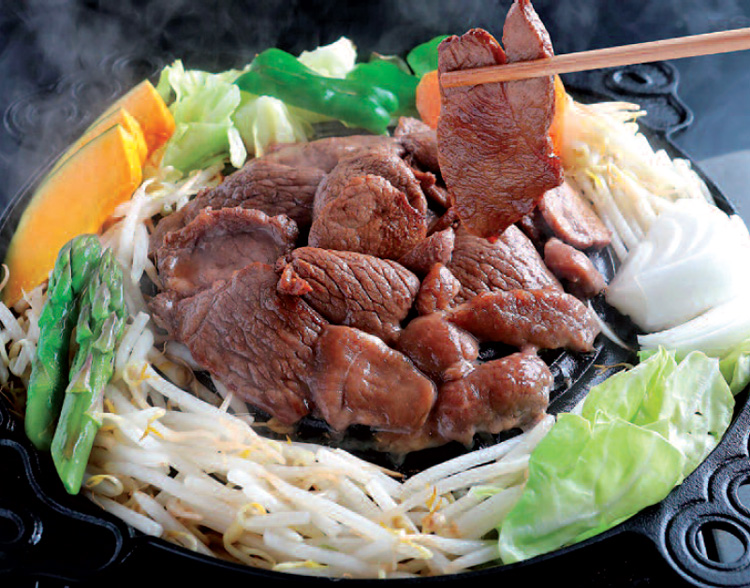 Jingisukan is part of Hokkaido’s culinary heritage, even if its origins remain a mystery.

Named after the celebrated warrior Genghis khan, this dish based on mutton is one of Hokkaido’s specialities.

A visit to Hokkaido ensures you will discover magnificent landscapes as well as being completely won over by its wonderful cuisine. As the breadbasket of Japan, and with the diversity of its agricultural produce, the archipelago’s second island is in a position to satisfy all tastes. When you ask a Japanese person to name a typical dish from that region, it’s very probable they will answer: “ramen!” (noodle soup). It’s true that there are many specialists situated in this part of the country from where this noodle soup originated (see Zoom Japan no. 8, December 2013). Outside Tokyo, it’s in Sapporo that the largest number of ramen restaurants can be found, isn’t it? Two other cities on the island, Asahikawa and Kushiro, are also famous for their ramen, which so many tourists come here to enjoy.

But ramen are not all there is to life. And some people with adventurous tastes will tell you that you need to search elsewhere for the island’s speciality known as Genghis Khan or Jingisukan in the Japanese transliteration. But what is jingisukan? It’s a dish of roast mutton accompanied by a selection of vegetables. Though it is officially recognised that this speciality comes from Hokkaido, its origins and its name are fiercely debated. In fact, the city of Tono, famous for being the original home of kappa (blind creatures from Japanese folklore), considers that it is where this dish was first eaten, as does Nagano Prefecture. But in 2007, the Minister of Agriculture decided it was Hokkaido that would be awarded the honour of being the Genghis Khan capital. Once its geographical origin had been established, the mystery of its name remained. Some people maintain that it stems from the shape of the dish it’s cooked in, which resembles the helmets worn by Genghis Khan’s Mongol soldiers. But it’s almost certain that the celebrated warrior never came to Hokkaido, despite there being a legend that claims otherwise. As this part of the country did not really begin to be developed until the 19th century, it’s more likely we should turn to China, more particularly Manchuria, to find the origins of this dish, which Japanese people living in these regions would have discovered and brought back to the archipelago, while giving it an exotic name. Besides, the first restaurant to specialise in Jingisukan opened in… Tokyo, in 1936.

Its connection to and development in Hokkaido is tied to sheep farming, which expanded with encouragement from the authorities. Its consumption increased after the Second World War with the opening of a restaurant in Sapporo in 1946, since when it has been enthusiastically adopted by the local inhabitants. The rest of Japan rediscovered Jingisukan as a consequence of the mad cow disease crisis in the early 2000s. The fear of the risk of contamination from eating beef led to the Japanese turning to another very easy to prepare meat dish. This dish can be found almost everywhere in specialist restaurants. But it can be an expensive delicacy if it is cooked using mutton raised in Hokkaido.