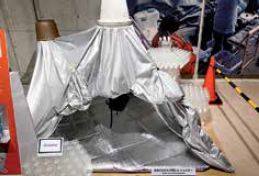 The head of the Tokyo Rinkai Disaster Prevention Park reminds us of a few common sense rules.

According to the Japanese government, the chances of a powerful earthquake striking Tokyo in the next 30 years is as high as 70%. Seismologists’ predictions are even grimmer, but dates aside, everybody agrees that it is a matter of “when”, not “if”. Considering that moving to another place is not really an option, as nowhere in this country is completely safe, there are only two alternatives left: to leave Japan for good or to prepare as best as you can. So, eager to learn as many survival tips as possible from an expert, I met Yamazaki Junichi, who heads the Tokyo Rinkai Disaster Prevention Park’s control/administration centre. The park is regularly visited by schools, regional offices and even families who want to learn more about how to handle a major disaster. “Obviously there are things we can’t control,” Yamazaki says, “but we can certainly take a number of measures in order to be as safe as possible, and one of the main areas where we can actually do something is home safety”. In order to explain what he means, Yamazaki takes me on a tour of the centre and shows me two identical rooms in very different conditions. They are meant to show how a house looks before and after a massive earthquake has occurred. “In 1995, Kobe experienced a disastrous earthquake,” he says, “and most of the 6,500 people who died on that occasion were crushed to death. Of course, many of them were killed by buildings that collapsed or falling debris, but another major cause was furniture shifting or falling over. This is the one area where each of us can actually do something to prevent this sort of accident. For example, furniture should be fixed to the wall so it doesn’t fall on your head. Also, if you put tall furniture near a door and it topples over, chances are you will be trapped inside the room with no way of escaping. Of course, putting tall heavy furniture near your bed or hanging something above it is equally dangerous. The kitchen is a particularly dangerous place because there are so many dishes and glasses, and even the fridge can turn into a deadly moving object”. We walk through a life-size disaster zone diorama. A convenience store sports a strange sticker on the door. “It says that they provide help in the event of a major disaster,” Yamazaki explains. “In big cities like Tokyo and Yokohama, particularly in the central districts, there is a big difference in the numbers of people around during the day and at night. This is because a lot of people regularly commute to work from the suburbs and other cities.

However, refugee shelters in each district have been built with only the residents in mind, so the problem arises of how to deal with all those people who actually don’t live there. In such emergency situations we need the aid of other places and convenience stores, petrol stations and sometimes even family restaurants have offered their help. Here you can find water, disaster-related information and can even use their toilets”. Next we watch a video showing a simulation of a major earthquake in Tokyo. It is 6.00pm and the blackout which immediately follows plunges the whole city into darkness, except for those areas where fires have broken out. All traffic grinds to a halt and buildings and other infrastructure that are not quake-proof are seriously damaged. “The problem with fires is that the sheer number of them makes fire-fighting extremely difficult,” Yamazaki points out. “Another problem is that many people’s first instinct is to head home. Unfortunately, this mass exodus causes a great deal of chaos, including congestion in the streets, which in turn makes the rescuers’ work more difficult. Therefore, ideally, all these people who are stranded away from home should just stop where they are and head to the nearest evacuation site”. “Another related problem is that even before beginning their long trek home, people start making phone calls to check on their loved ones. Everybody does it at the same time, causing all mobile phone communication to fail. However, if everybody just leaves a short message this problem is less likely to occur, so a message system has been devised which can be used with both a mobile phone or a public telephone. For example, if you know a family member is home alone, your first reaction is to go home and check on his safety, but if they leave a message and let you know they are alright, you may take it easier”. Yamazaki advises people to always carry an electric torch and a bottle of water with them. “As I said, a major quake is immediately followed by a massive blackout, so a torch can be very useful. As for the water, one of the worst things that can happen, besides being injured, is finding yourself trapped in an elevator. Consider that in the case of a major quake in Tokyo, the elevators in around 30,000 buildings are going to stop automatically for safety reasons. It is likely that you will spend 2-3 days inside one of them, and having some water with you will greatly improve your chances of making it out alive”. Lastly, we climb onto the roof of the building and enjoy a 360-degree view of Tokyo Bay. Indeed, this place – that in the event of a major disasterturns into a rescue control centre – was chosen because it is easily accessible from the air (by helicopter), from the sea and from the city centre where the government offices are. “Visitors never fail to ask us two questions; “Is this place safe from a tsunami?” and “What about liquefaction?”. With regard to tsunamis, Tokyo Bay is much shallower than the Pacific Ocean, and according to past data, the sea level would not rise higher than 2.7 metres even if a major tsunami reached the city. We are about eight metres above sea level so the place is reasonably safe. As for liquefaction, this is a manmade island and, yes, liquefaction is going to happen. However, both the heliport and the control centre are quake-absorbing structures built on strong foundations, so they can stand a quake as strong as magnitude 7”. Yamazaki compares quake prevention to dental health. “Many people don’t see a dentist until their teeth really start to hurt, but at that point it may be too late,” he says, “and the dentist may have to pull out your bad tooth. This can be compared to losing a family member in the event of a disaster. The difference is, you can always replace a pulled tooth with a fake one, but you can never replace a dead person. That’s why prevention is so important”. “In any case, what everybody must understand is that an earthquake can strike at any time, day or night, and it is so sudden that we often don’t have the time to react in any way.

Now, for example, all mobile phones and smart phones in Japan are equipped with an earthquake alarm system which is supposed to alert you a few seconds before an earthquake strikes, but it is usually too late to do anything by then. The only way to raise your chances of survival is to think ahead and be prepared. When you think about it, people always get ready for a number of things, like studying hard before a test or training before a sports event. However, there are no drills to prepare people to deal with a major disaster like a quake. So it’s up to you to think about your own safety”.