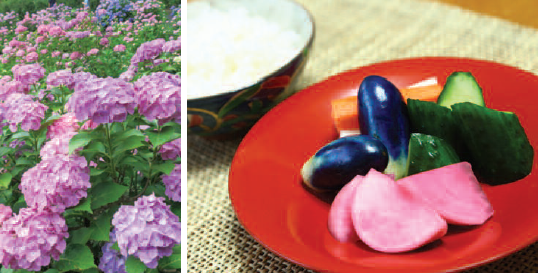 June: A tasty snack to help get through Japan’s offensive rainy season

Once the bright and pleasant sunny weather of May has passed, the humidity shoots up across Japan and makes for a muggy June. An old name for the month of June is “munazuki”, which literally means “the waterless month”, but ironically this is when Japan’s annual period of heavy rain known as the “tsuyu” begins, with the highest recorded rainfall for the whole year! And image that many Japanese people have when they think of June is of caterpillars crawling across the rain-soaked leaves of hydrangeas. It is a season where people want to go outside and walk among the blooms springing up across the country with umbrella in hand, but can also be humid and oppressive time, when many people find their appetite decreases. Because of the stifling atmosphere, many prefer crisp, refreshing foods at this time of year, and the sales of traditional pickled foods known as “tsukemono” increase exponentially. Tsukemono consists of various vegetables left to pickle in salt, vinegar or the lees left over after sake production. This process involves pickling using the lactobacillus found in plants, giving a pleasing flavour and texture that goes brilliantly with steamed white rice. The technique was originally developed to preserve foods from going mouldy, but in recent times it has received interest for its health benefits, as the lactobacillus bacteria are still alive when they enter the intestine and can have positive effects there.