One would never think of enjoying tonkatasu on its own. To enjoy the dish at its best, you need a good sauce. 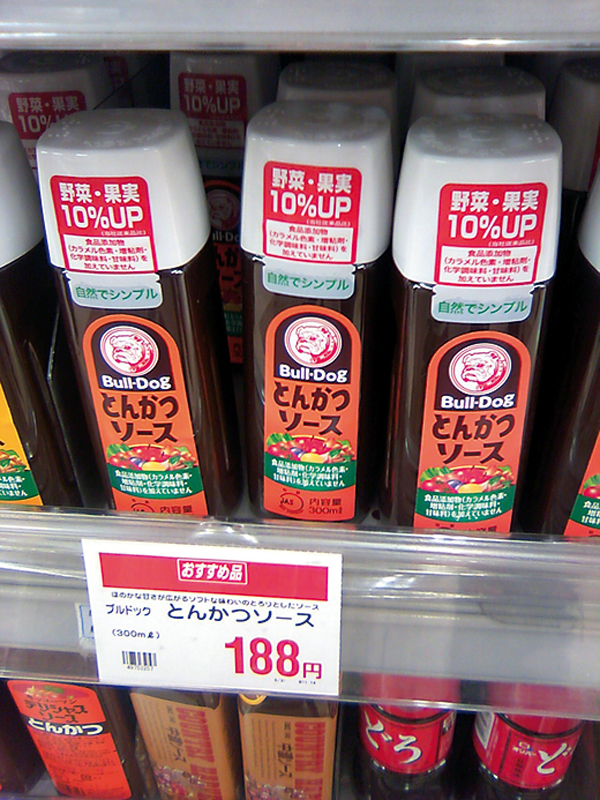 Fans of tonkatsu like to talk about the best cuts of meat and discuss the finer points of deep-frying, but for some people tonkatsu is really all about the sauce. In fact, some go so far as to state that without the sauce, tonkatsu would not even exist.

Tonkatsu sauce is a complex combination of many elements, with flavours ranging from sweet to spicy. Each commercially available brand differs slightly from the others, but they all share a few common ingredients, the most important being fruit and vegetables that compliment the taste of pork very well.

Both tonkatsu and its sauce are thought to have derived from English cuisine imported into Japan in the 19th century. Indeed, the sauce is commonly described as a sort of Worcestershire-style sauce, and while this is a good enough comparison, it’s also true that the Japanese variety is a lot thicker, sweeter, browner and completely vegetarian. In a sense it is more similar to HP Sauce.

During the Meiji period (1868-1912), the Westernization of the country overturned a centuries- old social ban on eating meat. Breaded pork cutlets were probably first served in a Ginza restaurant in 1895 and began to enjoy a boom in popularity. This continued until the early twentieth century, when tonkatsu had come to be considered one of the three most popular western inspired foods, along with croquettes and curried rice. Around 1930, restaurants in Tokyo’s Ueno and Asakusa areas began to offer cutlets using thickly cut pork under the name tonkatsu.

The next step in the Japanization process of the dish involved its sauce. After some tinkering with the imported Worcestershire sauce that typically accompanied cutlets, the Japanese chefs came up with a local version that they called Worcester sauce (pronounced Uustaa in Japanese). Early on they even tried to market this product as a new kind of soy sauce, but the campaign was a failure as it tasted so different from the original. Following the Second World War, a unique tonkatsu sauce evolved when vegetables and fruit were added, resulting in the thick, rich-tasting sauce that we all know and love today.

Nowadays, many brands of tonkatsu sauce are available in supermarkets in Japan. Some of the more popular are Ikari, Dobuzuke, Bairin Tokusen and Mitsuya, but the undisputed number one is Bull-Dog, which has a particularly deep, spicy yet sweet taste that perfectly complements the pork cutlet, and just the right level of viscosity. Bull-Dog has a history spanning back over 100 years. At the beginning of the 20th century, when western food was starting to spread into Japanese homes, a shop called Misawaya (established in 1902 as a food-wholesale outlet) developed a sauce based on Worcestershire Sauce that would suit Japanese tastes. In 1905 they opened a small scale factory in Hatchobori, in central Tokyo, to provide supplies for making their sauce. When it was first established bottles and earthen jars were used to store the sauce and it was sold by measure.

Since the end of the 19th century, a new, unique category of food became popular in Japan. Socalled yoshoku (literally western cuisine) is comprised of European-influenced dishes like curried rice, croquettes, omu-raisu (rice filled omelette) and cutlets, modified and reinvented with typical Japanese flair. Bull-Dog sauce gained success not just as a cooking ingredient but as a condiment used on yoshoku and other fried foods. As the sauce began to appear in Japanese homes, it had a great impact the development of Japanese food culture.

In 1935 the company expanded production by opening a factory in Hatogaya (Saitama Prefecture), but it was only after World War II that Worcester sauce really took off along with the rapid growth in popularity of yoshoku cooking in the more rural regions, as it had had previously been limited to the big cities. Finally, in 1951, Bull-Dog released its first tonkatsu sauce.

Despite fierce competition, Bull-Dog sauce stands out in every shop thanks to its iconic logo. The bulldog is not just a symbolic and beloved dog in England, where Worcestershire sauce originated, but according to the company’s website they also became popular pets in Japan during the late 1920s, when the sauce that took their name became established in Japanese homes. Therefore “Bull-Dog” was adopted as the new company name and brand mark, in the hope that the sauce would become as beloved as those pet dogs.

Like all Japanese Worcester and tonkatsu sauces, Bull-Dog contains lots of pureed fruits and vegetables such as apples, tomatoes, onions, carrots, lemons and prunes. Its natural sweet and sour flavour is derived primarily from these vegetables and fruits and makes heavy, fried foods fresh tasting and easy to eat. They also produce a very syrupy sauce that is well suited to deep-fried food but does not make it greasy or soggy. Another important ingredient is vinegar, which makes up about 30% of the sauce. Vinegar not only gives flavour but is effective in preserving and keeping the sauce bacteria-free. It’s also said that vinegar helps to increase your appetite and recover from fatigue. The third vital ingredient is spices. In making Bull-Dog sauce, over 10 different spices are ground and blended in-house, including ginger, red pepper, cinnamon, cloves, laurel and thyme. This blend gives the sauce its tangy flavour. Finally corn starch is added to the mix as a thickener.

Today, Bull-Dog and other tonkatsu sauce brands can be found outside Japan as well, but don’t worry if you have problems finding them because this sauce is actually quite easy to make, even at home. On the Internet you can find several recipes, each one slightly different from the others, so thefollowing is just one example.

Instructions:
Simply combine all the ingredients in a small bowl and whisk together. Adjust the balance of ingredients according to your preference.
An alternative recipe requires a few more ingredients such as soy sauce (2½ tablespoons), dry sherry (1½ tablespoons) and garlic powder (1 to 2 teaspoons)
It takes only five minutes to prepare, but you are advised to let the sauce stand for one hour to allow the flavours to blend.