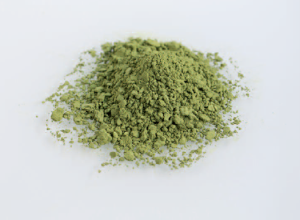 Considering it as a sort of superhero amongst teas, Louise Cheadle gives us a lesson about this wonderful green powder.

Matcha is 100% natural, organic green tea leaves which have been carefully ground down to form a fine powder. It has been drunk in Japan as part of the tea ceremony for almost 900 years, and is used by Buddhist monks to keep them alert, awake and focused during long days of meditation. Until recently, virtually all matcha has been consumed within Japan, where it’s particularly popular among students who are cramming for exams. But it’s now gaining popularity in the UK, too, and it can be found in cafes, health food shops and smoothie bars. We like to think of matcha as a sort of superhero amongst teas, as it’s super-concentrated and packed full of the goodness we need to help keep us looking and feeling happy and healthy. The tea leaves are grown under cover for the last two weeks of cultivation to produce lots of chlorophyll (the bright green good stuff). Some types of matcha contain the stems and veins, which can dilute the nutritional value and leave it tasting bitter. Teapigs matcha has had the stems and veins rigorously removed – they like to stick to their guns when it comes to quality and flavour. The leaves are then dried and slowly ground between two granite rocks to a very fine powder. This is then packed immediately in a vacuum sealed tin, to lock in all the nutrients. Teapigs genuine organic matcha comes from the renowned Nishio region in Japan, where some of the country’s highest quality tea leaves are grown. Due to its idyllic climate, freshwater rivers and fertile soils, this region has been known for its tea cultivation ever since 1200s. It even holds the Guinness World Record for the largest simultaneous tea ceremony! Matcha is essentially a very concentrated form of green tea. The way it’s grown and consumed means that it’s packed full of essential vitamins and minerals. Matcha tea bushes are grown under shade which dramatically increases the chlorophyll content of the leaf – this is the bright green stuff which is really good for us, and which is particularly rich in antioxidants. When you drink regular green tea, you throw away the leaves afterwards which a bit like boiling spinach, throwing away the spinach and just drinking the water – you’ll get some of the nutrients, but you’re throwing away the best bit. Matcha is drunk as a fine powder diffused in liquid so you actually ingest the whole leaf, consuming every last bit of goodness. Health Benefits of Matcha Green Tea Antioxidant Blast Teapigs matcha contains 137 times the antioxidants of regular green tea – wow! Antioxidant capacity can be measured by the ORAC (Oxygen Radical Absorbancy Capacity) and this shows us the ability of certain foods to protect us from nasty free radicals, which cause ageing and general damage to our cells. Matcha scores very highly on the ORAC table, towering above many of our well-known super-foods such as spinach, blueberries and goji berries! Energising and calming Matcha contains two special amino acids called theophylline and L-theanine. Like all green tea, matcha naturally contains caffeine but, unlike coffee, it works together with these two important amino acids to give you a sustained energy boost which can last 6 hours. By stimulating the production of alpha brain waves, L-theanine helps to create a state of mental alertness but keeping you relaxed at the same time – no wonder Buddhist monks have been drinking matcha for centuries. Plus a Japanese study in 1999 also found that L-theanine can help:
• Improve learning performance,
• Promote concentration and
• Support the immune system.
The L-theanine content in tea also increases with the grade of tea, with high-grade matcha (that’s our stuff) having the greatest percentage of this marvellous amino acid1. Healthy skin Green tea naturally contains polyphenols, this may not mean much to you and us, but the clever people at the University of Alabama have found that consumption of green tea polyphenols can inhibit UV radiation-induced skin damage. It is well known that UV rays from the sun can damage and age skin and even cause skin cancer. Their study found that green tea polyphenols can be used as an effective agent for the prevention of sun induced skin disorders, helping to keep your skin looking young and beautiful. Sounds good to us!

No3 [Drinking] Raise your glass to Japan’s brewers

No10 [Drinking] A beverage to rival Sake