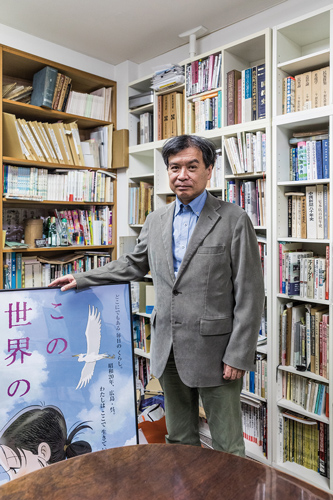 Katabuchi Sunao had a lot of difficulties to make his film, but he never gave up.

Despite the success of Your Name, Katabuchi Sunao’s film was released to well deserved critical acclaim.

After six difficult years in which it often seemed that it would never be completed, Katabuchi Sunao’s In This Corner of the World finally came out last November to positive reviews and a good performance at the box office, winning multiple prizes and even being nominated best film of the year by respected film magazine Kinema Junpo. Zoom Japan met the director before he takes the film to the Annecy International Animated Film Festival and other events abroad.

Why did you decide to turn Kouno-san’s manga into a movie?
KaTaBUCHI Sunao :I think we share the same approach to story-telling. In particular, Kounosan never glamorizes her stories, but tells them matter-of-factly. They could be considered simple and quite subdued, but at the same time they are very compelling. I guess what I love the most about this story is that it shows in great detail the characters’ everyday life. When I read the manga, I felt as if I had just met a distant relative whose life I knew nothing about. You can feel that a lot of research went into making this story. This is exactly the same way I like to work on a project. Actually, when I met Kouno-san she told me that her editor had proposed a number of different endings, including making Suzu-san, the protagonist, die in dramatic fashion, but she had rejected all of them and remained faithful to her original idea.

I heard that you couldn’t find any financial backing at first as everybody thought the story was not dramatic enough.
K. S.:Yes, that’s true (laughs). I remember that when I first introduced myself to Kouno-san, she said, “you’re the author of Famous Dog Lassie (a 26-episode TV series that aired in 1996), aren’t you?” She confessed that she had seen my anime when she first broke into the manga magazine market, and she had been inspired to infuse the same everyday-life quality into her own work.
When I heard this, I was convinced I had found a kindred spirit.

How was it working with Kouno-san?
K. S.:I first wrote her a letter in the summer of 2010, but I didn’t actually meet her until ten months later. In the meantime we began our research work, checking the places that are featured in the story, etc. So when we finally met I was able to ask very specific questions, such as about the exact location of Suzu’s house in Kure City. From the very start, we just put aside any formality and got down to business.

The city of Hiroshima as we see it in the film was completely obliterated by the atomic bombing. How did you manage to recreate the prewar cityscape?
K. S.:Apart from the A-Bomb Dome, there’s only one single building from the wartime years still standing – you can see it in the film – so it took a long time and a great deal of effort. Now, let me show you this (he starts rummaging in the jumble of papers in one corner of the room and pulls several volumes from a huge bookcase). These are reproductions of telephone books at the time, which I found in a secondhand bookshop in Hiroshima. They give you a clear idea of the existing shops at the time and their location. But this information was not enough, so we looked for some visual materials in the National Archive (keeps rummaging and extracts a few long tubes from the mess). These are aerial photos of the port of Hiroshima taken by the Japanese Air Force. This is from 1939, while this one is from 1945. You can clearly see how new shipyards were added both before and during the war to help the war effort. This photo was actually taken one week before the A bomb was dropped on Hiroshima. Then there are these sketches someone made at the time. Probably because Hiroshima was completely
destroyed, many people have felt the need to preserve as many records as possible of the city before it was bombed. In this sense, we’ve been very lucky to find a lot of information. The problem was finding information on Kure. At the time, it was an important military port, so photo-taking was severely restricted. But we managed to get hold of some, and then painstakingly checked each single building against other information we had gathered. This process continued all through the film’s production, even after we had made the storyboard. 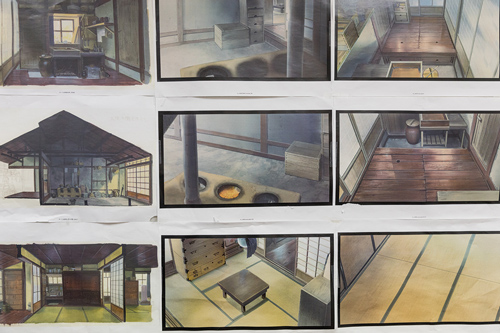 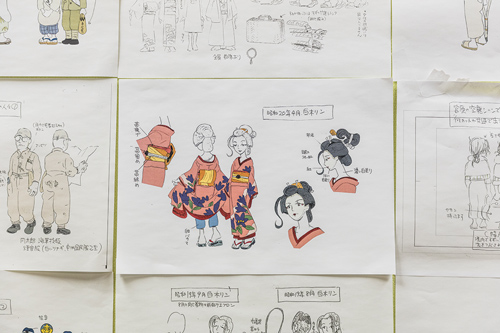 To recreate the atmosphere as it was during the war, the director did a lot of research.

Most of your films’ protagonists are women. I wonder why.
K. S.:On the one hand, it’s just coincidence. On the other, I guess I have a particular feeling for stories written by women, maybe because I’m a man. Probably the stories written by men are too close for me to really appreciate them. On the contrary, being a man reading something written by a woman creates a sort of distance that allows me to enjoy and appreciate them more.

How would you compare Princess arete (from the feature film of the same name that Katabuchi directed in 2001) and Suzu-san?
K. S.:Princess Arete is a very inquisitive girl who doesn’t easily give up once she decides to do something. When the story begins, it’s as if her true self is hidden behind a mask, but, eventually, she
gradually manages to express her feelings and to find a way to live her own life to the full. In a sense, Suzu-san is quite similar to Arete. She’s a very shy and innocent girl with little knowledge of the world around her. She’s a very reserved person. The only way she’s able to express herself is through her drawings. It’s only when she loses her right hand – her writing hand – that she’s forced to come out of her shell and speak her mind.

Suzu-san’s world is very different from now. Japanese society has changed since the war. Do you think Japanese families have changed as well?
K. S.:I don’t think the family itself has changed. What has changed is the legal system surrounding the family as an institution. During Suzu’s times, for example, women didn’t have a right to vote, and couldn’t really take part in political activity. They couldn’t even serve as soldiers, which is probably a good thing. In other words, they were discriminated by a male-dominated society. However, I think that within the family – at least in some families – things were a little different. Japanese society had actually changed in many ways before the war, especially in the big cities where nuclear families were becoming the norm compared to
multi-generational households in the countryside. Unfortunately, the war put a stop to these social changes, and imposed a more traditional and conservative system.

It took about six years to complete this film, mostly because of a lack of funds. How did you feel at the time?
K. S.:It was quite frustrating because the people we dealt with directly were usually quite sympathetic and liked our project, but when they reported back to their companies they always wanted to see some hard data to show that we could be trusted and that our film would be a success. Obviously, they’re always thinking about the bottom line. But how do you achieve this? They looked at my previous film’s performance (Mai Mai Miracle, 2009) and found that its first run in the cinema hadn’t sold many tickets. So they concluded that I couldn’t be trusted with making a successful film. They completely overlooked the fact that in its second run the film had raked in almost as much money as the first run. In other words, it started slowly, but it gathered steam along the way thanks to word of mouth, the Internet and social networks. But no matter how good a story is, the sponsors want to be sure that there is actually an audience for that story before the film is completed. They want to see hard data, and we were finally able to do that when we resorted to crowd funding, and were able to show them how many people were backing the film. In the end, this film has proved to be a long seller, thanks again to word of mouth. Also, it’s the kind of story that attracts people in their 70s and 80s, i.e. those people who usually don’t go to the cinema.

What makes you particularly happy about this film?
K. S.:The fact that these 70 and 80 year olds praised the film for being so accurate in its depiction of wartime Japan. Those words made me and my team very proud. We felt that all the long hours we had put into making this film were very worthwhile.

No49 [Well-being] The zazen experience

No47 [Exclusive] First visit to the Hokusai museum