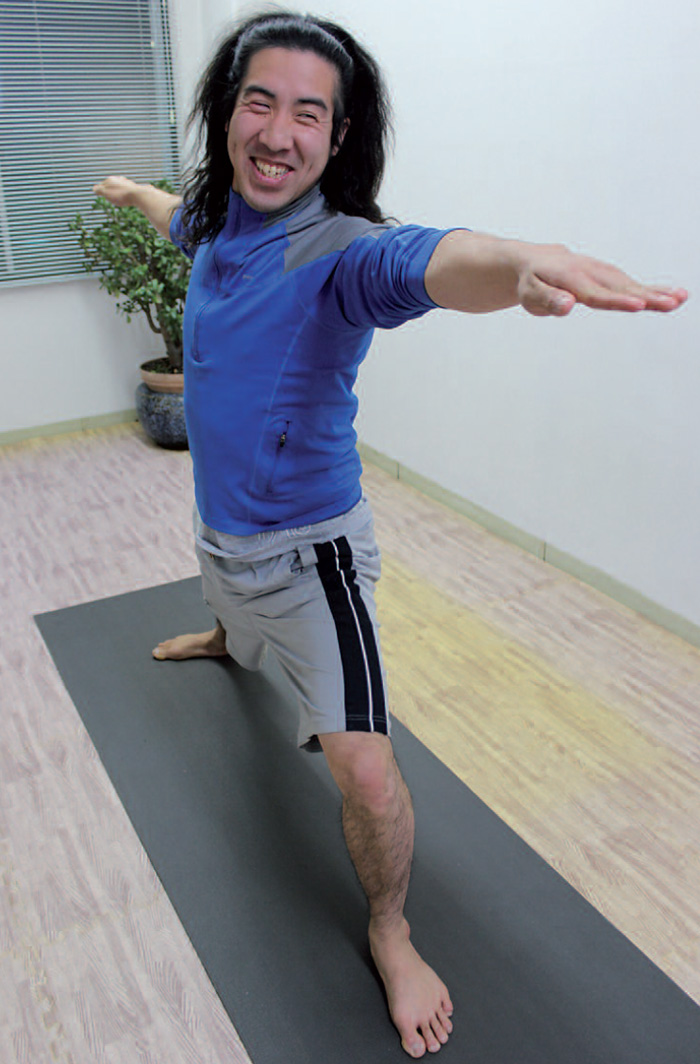 This Jack-of-all-trades has found his feet in this city in the throes of reconstruction.

After coming to live in Ishinomaki in April 2011, Iwata Shota has helped in the city’s recovery in many ways.

Since the earthquake in 2011, when Iwata Shot came to live in Ishinomaki, he has become “a Jack-of-all-trades”, even though his speciality is still teaching yoga. Apart from his yoga classes, he helps harvest scallops, gives a helping hand to cattle farmers and also keeps busy designing websites. “Here, in Ishinomaki, there’s a wide range of rewarding work, which is not often the case in larger cities. It’s both interesting and cool to be surrounded by nature”, he assures us. He never had a moment’s hesitation in staying here, his expression seems to say.

The youngest in a family who ran an electrical goods shop in Kitakyushu, a large city in Fukuoka Prefecture, he was very influenced by his father who loved cars. After high school, he trained as an engineer and worked in a Hitachi Group electronics factory where they made motorvehicle parts. His spent all his days working at the highest level of advanced technology until a friend introduced him to surfing. After that, he threw himself into climbing, then…yoga. The more he came into contact with nature, the more he thought about what he wanted to achieve in his life.

So he then decided to live closer to nature and to stop being a simple cog in the wheel of a large company. That’s why, aged 26, he chose a new path, leaving for Okinawa to lead a life of selfsufficiency in the middle of the countryside and to teach yoga. One summer, at the age of 27, he left to travel to Australia to gain an American “Yoga Alliance 200” diploma. The following year, a few weeks after he had opened his yoga studio in Okinawa, the earthquake of 11 March 2011 took place.

In 2004, after a powerful earthquake struck the Niigata region, he regretted that his work contract prevented him from travelling to help in the relief effort. He made a promise to himself: “Next time, I’d be free to leave and help out”. That’s why, in April 2011, he moved to to Ishinomaki with some friends. For a year he worked for a volunteer organisation, and when he was due to leave following the scaling down of the relief effort, he thought about what to do next. “I really wanted to see how the city would develop in the future. Perhaps my yoga classes could be of some benefit?” he said to himself. His decision to stay was greatly influenced by the presence of many young people who were “determined to achieve something positive for the city”.

Since then…there’s been a notable increase in people taking up yoga in this port city. At present, Iwata Shota is busy setting up a citycentre yoga studio. “I’ve noticed that there are more and more people interested in yoga, and I want to take advantage of that to encourage them”, he says. As for keeping up all his other activities at the same time, he explains that, “People have a false idea about work. Work is After coming to live in Ishinomaki in April 2011, Iwata Shota has helped in the city’s recovery in many ways. SERIES He who succeeded in settling in not just about sitting at a desk. Working in the open air surrounded by nature is also very stimulating”. Ishinomaki is often blamed for being “neither countryside nor city”. But Iwata Shota expresses a completely different point of view. “There are good things that stem from both its rural and urban sides. That’s the city’s strongest asset!” he exclaims enthusiastically.