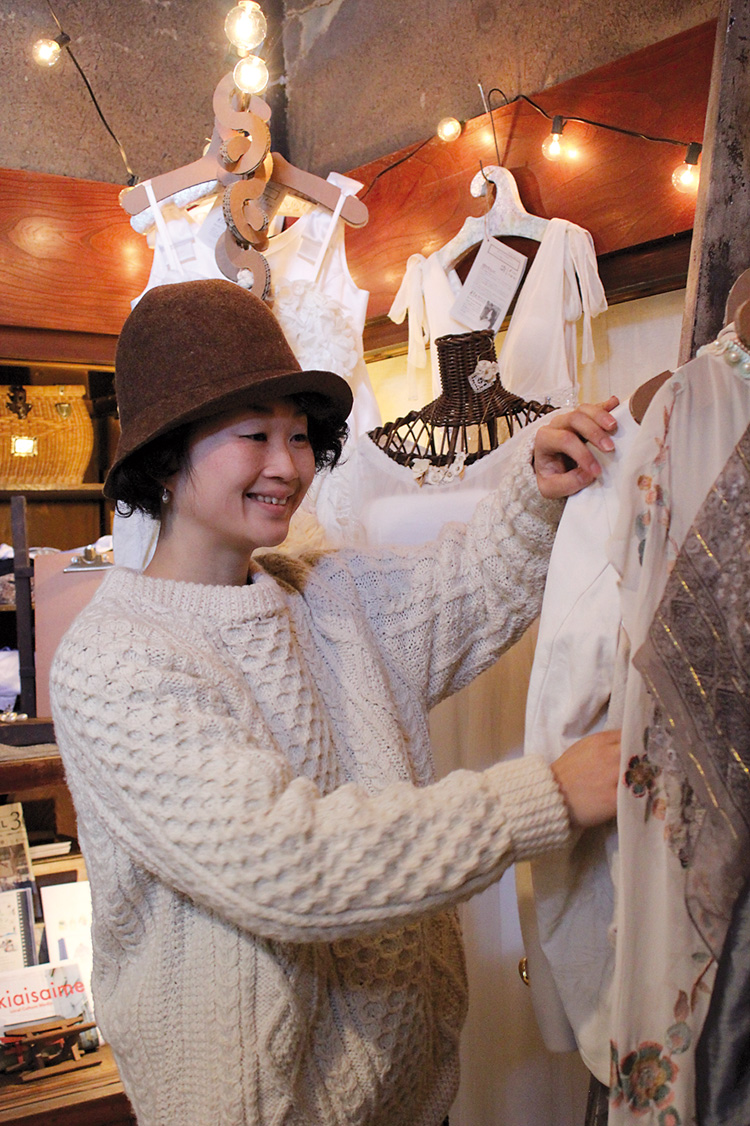 Sasaki Mai has discovered the best way for her to succeed and flourish.

At the age of 29, Sasaki Mai has discovered a sense of purpose thanks to her clothes shop, which helps her weave connections.

The idea of “connection” has gained importance after the events of 11 March 2011. Might it be possible to create connections between people with the help of clothes, which are themselves the result of weaving together separate threads?

Originally from the Kitakamicho district in Ishinomaki, Sasaki Mai works in the fashion industry. In September 2014, she became one of many who returned to the city where they were born. At present, she runs Hiyori Style, a shop where clothes left on deposit are available for anyone interested in hiring them. She’s hoping this will be the start of a new trend in clothing.

Even as a student obliged to wear either a school uniform or sports gear, she’d have loved to have had access “to fashionable second-hand clothes”. There were no bookshops near where she lived, and when her parents went into town she’d ask them to buy her fashion magazines. Nor were there any shops near at hand with clothes to set her imagination alight. While at high school, she joined a drawing club and loved making onthe- spot street sketches as well as organising exhibitions. She’d also visit Treasures, a second- hand shop located opposite Ishinomaki railway station.

When still a college student, she already knew that she wanted to work in fashion. Subsequently, she went to a specialist fashion school in Tokyo and was trained in haute couture. Her inability to express herself very well made her search for employment rather difficult, but one of her tutors introduced her to Kapital, a large clothing company, who took her on as a salesperson though she would have preferred to work producing garments …

Working in the shop, her days were spent practising her sales spiel, and though she put up with this situation, she always thought that “one day, I will be making clothes”. It was another three years before she was offered work in their factory located in Okayama in the south of the country. She accepted with alacrity, and for two years she was kept busy while both overseeing quality control and making garments. As a high-school pupil, she went through a period of rejecting Ishinomaki to the point of saying: “I hate this city!” But one day, on seeing pictures of Ishinomaki on the Internet after the tsunami, she realised the upheaval it had suffered and decided to return.

So, at the age of 27, she resigned from her job at the clothing factory and travelled around Japan before finally settling back in Ishinomaki. She found admin work in a nearby spa, and though her life was fairly settled, still her goal was to fulfil her original desire. “To hire out clothes had become an obsession of mine”, she explains. She was offered the opportunity to do this by Amano Miki, owner of the Hiyori Kitchen cafe situated in Ishinomaki’s retail centre. Amano Miki also wanted to do something involving “clothing”. She agreed on the spot and said: “It’s a great idea. Let’s do it together!” And so she was given the chance to share the project with someone.

In July 2016, she opened Hiyori Style upstairs in Hiyori Kitchen. The concept of hiring clothes came from the idea “allowing your favourite clothes…to go on a journey!”. That’s how she’s able to use the clothes to forge links. “I act as an intermediary for the clothes as well as for people”, she says with a timid smile. At the end of 2016, she closed her shop in the city’s retail centre to relocate to a cafe in the Monoucho district in the northwestern part of Ishinimaki. She firmly believes that a garment represents great potential. “I’m very proud of my first name…’ whose ideogram means ‘outfit’!” she says. Thanks to all her encounters, Sasaki Mai is finding it much easier to express herself now.